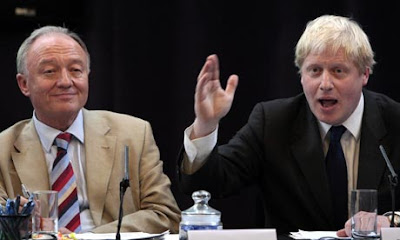 When Boris Johnson first entered the race to become London mayor there was a combination of amusement, disbelief and expectation; expectation, that is, not of a Conservative victory but of a relishable catalogue of gaffes, blunders and general hilarity. That Boris might actually win seemed at best remote, at worst some sort of contradiction in terms. Surely, sage commentators agreed, the very fact that the Tories were putting forward their court jester revealed their tacit acknowledgement that Ken Livingstone was unbeatable. With their eyes on the suddenly winnable prize of a general election victory, Cameron's advisers wouldn't chance the unpredictable, potentially calamitous event of a Johnsonian mayorality. Would they?

But then the unthinkable happened. Boris made relatively few gaffes. In fact, he made relatively few statements of any kind, which may not have been entirely unconnected. And as people looked from Ken to Boris, and from Boris and Ken, they could no longer make out which was the bigger joke. Ken was no longer the cuddly rebel that Londoners warmed to when he was standing up to, and beating, the might of the Blair machine. As the years of his incumbency wore on, more and more reminders emerged of the Red Ken of old: the friend of terrorists and terrorist sympathisers and dodgy third-world dictators, the race and sexuality-obsessed player of political identity-cards, the adenoidal newt-fancying nerd. And suddenly Boris looked fresh, and exciting, and fun, and - to use a phrase once used by David Cameron - a ray of sunshine.

And so the polls begun to shift. What first looked like a rogue finding of rising support for the Conservative candidate quickly became a trend, and then a solid, sustained lead. As Labour's national figures came to resemble the downward swoop of a peregrine falcon in pursuit of a particularly plump pigeon, so Boris soared in the polls. The race was suddenly his to lose. Even his problematic private life seemed less problematic when revelations emerged of Ken's complicated domestic arrangements. Two days ago YouGov gave Boris a thirteen point lead.

Some continue to find the prospect of a Johnson victory alarming. Andrew Rawnsley, for example, writes that "the prospect of Mayor Boris scares many Tories even more than it does Labour people." And you can see why. Thus far he has been surrounded by protective cordon of minders, who have shielded him with the hatched-faced determination of those Chinese torch-guards in pale blue tracksuits. Once the election is out of the way, he is almost guaranteed to say something unfortunate, though he is as unlikely to go as far as Ken Livingstone did when he compared a (Jewish) journalist to a concentration camp guard. A more serious potential danger, perhaps, is inactivity. Will Boris tire of yet another round of meetings with corporate executives or special interest groups and succumb once more to the siren lure of Have I Got News For You? Will he simply take too many afternoons off?

Perhaps. And perhaps it matters less than is generally assumed. If he has a good enough team behind him, a mayor can be a figurehead, a presedential face for the city. He is not required to micro-manage. Ronald Reagan spent much of his time in the White House playing gold and, latterly, losing his memory, yet he became one of the greats. Gordon Brown seeks to control every aspect of everything that goes on - an emulation of the principle once enunciated by Frederick the Great of Prussia, that government should spring from a single agile mind. And a fat lot of good it does him. If nothing else, Boris will cheer everyone up. And in straitened times, when optimism is hard to come by, that is not nothing.

On the other hand he may, like the monkey impersonator unexpectedly elected mayor of Hartlepool, turn out to be a perfectly competent administrator.

There's a fantasy element in the Boris candidacy that may account for some of its appeal, now that reality is less attractive than it once was. But can it carry him to victory? The same political insiders and professional pundits who wrote him off in the beginning have started to assume his victory. Andrew Porter, writing on the Telegraph's blog this lunchtime, wonders whether Labour has "given up on Ken Livingstone’s chances in London?" He wonders whether the party will turn next time to Tessa Jowell, or John Cruddas, or even (wouldn't that be appropriate?) Sir Ian Blair.

But I'm not so sure. The latest poll puts the two main candidates neck and neck, with Livingstone even edging into a slight lead. Last night in the candidates' debate on Newsnight - a programme not excessively watched, but clips from which will be widely distributed - Johnson underperfomed. At least, that has been the general consensus of those who saw it. And in the end Livingstone has the experience, the commitment, even the gravitas. He's not as popular as he once was, but, faced with a choice of two devils, people tend to go with the one they know.

Much as I'd like to see the dreadful Livingstone go down to a well-deserved defeat, my money's on Ken.
Email Post
Labels: Boris Johnson Boris v Ken Politics