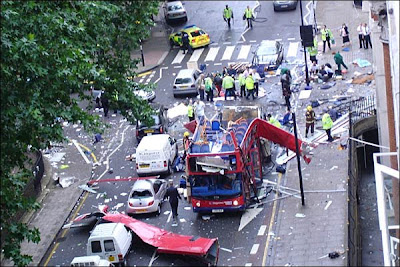 Terrorism is back in the news. There's Fitna, of course, still making ripples and now back on LiveLeak after it appeared everywhere else (and, reports the less-than-reliable PopBitch, after the company received death-threats from a far-right group if they didn't host it). There are the latest thoughts of Osama B's sidekick Ayman al-Zawahri, notable for their extreme expressions of piety exercised in the cause of terrorist mayhem. Zawahri mentions God far more often than, say, Rowan Williams in one of his sermons. And we have the opening of a high-profile trial featuring all the classic elements: young men with beards, blood-chilling plots to blow up planes, and rank incompetence.

In such a climate, fear of terrorism is bound to increase. And with fear, the desire to seek the protection, real and imagined, of the authorities. Earlier today I happened upon an excellent analysis of the psychology of all this by the security expert Bruce Schneier. Schneier's main point was that there was a difference - a big difference - between feeling secure and actually being so. "You can feel secure even though you're not, and you can be secure even though you don't feel it." And that governments, whose main aim to retain public confidence, are bound to be more interested in the shadow than the substance:

Terrorism is particularly significant for a number of reasons. Firstly, as a threat it is comparatively trivial. At least it is in western Europe and the US. In places like Iraq, of course, it's very far from trivial: but that is because terrorism always flourishes in chaotic conditions, in failed states, and in places of political hopelessness and material deprivation. Secondly, it's relatively easy to do something about: you just need to concentrate resources on intelligence-gathering. And it's even easier to be seen to be doing something. It may not be possible to prevent all terrorist incidents before they occur, but the record shows that most will be prevented, and those that manage to evade detection (such as the events last summer in London and Glasgow) are more likely than not to be incompetently executed. There have been far more arrests than trials, but far more trials than terrorist incidents. If there is a war against terrorism, the terrorists - at least in this country - are fighting insuperable odds.

Thirdly, perceptions of terrorism are strikingly at variance with this reality. Since there are very few successful terror attacks, those that occur are guaranteed massive coverage, which has the perverse effect of making them loom unrealistically large in public consciousness. When terrorism becomes pervasive - Iraq, for example, or even Pakistan - it simultaneously becomes mundane, less shocking, less newsworthy. If there were bombs going off every day in London they would struggle to make the front pages after a while: they would actually become less interesting than Britney's latest breakdown.

The result is a godsend for politicians. They can strike poses; they can pass laws; they can gain cheap popularity by appearing to take a serious problem seriously. And they know, all the time, that whatever happens they can't lose. If a terrorist attack occurs, they can respond, as they always respond, by passing yet more laws. And they benefit from the mood that inevitably possesses the nation on such occasions that we must all stand together against terrorists. If a terrorist attack is thwarted, they can point to the success of their security strategy, while hinting, at the same time, that some more laws are needed just to be on the safe side. The police might not have needed 42 days' detention without trial to catch this particular group of jihadi fantasists, any more than they needed it the last time: but in the future, who knows? You can never know what won't happen.

One obvious result is the salami-slicing of once unassailable liberties and legal principles: not just detention without trial and the construction of a surveillance state but also, shockingly, the return of torture as a legitimated form of interrogation. Another, perhaps less noticed, is the skewing of political priorities. Domestically, it's easier (and cheaper) to pass a few plausibly tough anti-terror laws than to prevent road accidents or cure cancer. Internationally, the real challenges may turn out to be over-population, shortages of fuel and raw materials, hunger, climate change and, more immediately, economic collapse. (Not obesity, incidentally.) International terrorism must come very low down any such list. A fascinating study by the ever-heretical Bjorn Lomborg disclosed that, in an average year, international terrorism claims a mere 420 lives. Moreover, counter-terrorism measures are not merely a waste of money, they actually make things worse:

Global annual spending on homeland security measures has increased by about US$70 billion since 2001. Unsurprisingly, this initially translated into a 34% drop in trans-national terrorist attacks. What is surprising is that there have been 67 more deaths, on average, each year. The rise in the death toll is caused by terrorists responding rationally to the higher risks imposed by greater security measures. They have shifted to attacks that create more carnage to increase the impact of fewer attacks.

In other words, if you can't get your bomb onto a plane because of scanners and hand-luggage restrictions, you could always blow up a bus. Assuming that there are a certain number of determined terrorists, then they will find things to terrorise. That there aren't more terrorist bombings has little or nothing to do with increased security at airports, and a great deal to do with the tiny numbers of terrorists, and the paltriness and incompetence of their schemes.

Lomborg's point, of course, is that the vast sums poured into anti-terrorist schemes could be much better spent on tackling the real challenges we face. One of the side-effects of which might be an amelioration in the very conditions that breed terrorism. As he says, "we should not allow fear to distract us from the best ways to respond. Nor should fear stop us from saving many more lives by spending the money on less-publicized issues facing the planet."

And maybe, too, we should be less afraid of a tiny handful of losers.

As an antidote to fear, and an impassioned plea for civil liberties from someone who has more reason than most to be worried about terrorism, I can heartily recommend this from the estimable Rachel North. As she rightly says, "terror is the art of making us afraid."
Email Post
Labels: civil liberties Islamism security terrorism