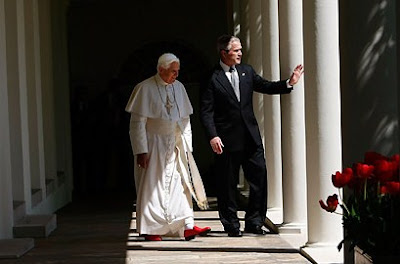 Now that Ratzo has clicked his ruby heels together and disappeared back to Rome, interest in all things papistic has been gently waning in the USA. Or has it? Via Reuters, I learn of bizarre speculations in some Italian newspapers that George W Bush might follow his good friend Tony's example and convert to Catholicism.

The evidence that born-again Bush - who comes across as a quintessentially Protestant phenomenon, and has actually moved previously in the opposite direction, from Episcopalianism to the Methodists - might soon be mugging up on the finer points of the dogma of the Assumption seems slight. According to the Italian magazine Panorama, the fact that the pope and the president prayed together at the Whitehouse might be significant. I doubt it. Bush evidently enjoys praying, especially when he's preparing to dispatch a bomber squadron or sign off on a death warrant, while Ratzo will probably pray with anyone. He's even been spotted inside a mosque. Dubya's brother Jeb Bush did convert to Catholicism, but only because his wife wanted him to (like Cherie, I suppose). Oh, and Bush has some Catholic advisers. And, er, that's it.

Not much of a story, then. Oddly, the source of the story seems to have been an earlier article by Daniel Burke in the Washington Post. Burke wrote on the eve of the visit about "a Catholic wind in the White House". He revealed that on the occasion of Ratzo's election three years ago Bush claimed to have read one of the new pope's books. Not, perhaps, the sort of reading material one would readily have associated with the president: clearly the man has very well-hidden depths.

"If Bill Clinton can be called America's first black president," wrote Burke, "George W. Bush could well be the nation's first Catholic president." Pretty big if, that, especially since Bill's black credentials have been tarnished somewhat after his crypto-racist attacks on Barack Obama. Burke has heard of Kennedy, by the way; he just thinks that JFK kept his religious beliefs (if any) entirely separate from his politics. By contrast, "Bush has welcomed Roman Catholic doctrine and teachings into the White House and based many important domestic policy decisions on them."

It's an interesting argument. Of course, many of these Catholic-friendly policies play equally well with Bush's evangelical supporters: for example, opposition to abortion, a Luddite approach to stem-cell research, or refusal to countenance anything that might look like same-sex marriage. Add in Bush's enthusiasm for "faith-based" social programmes and stricter "taste and decency" controls on TV and you have a presidency that will have given the Vatican much cause for satisfaction. If you forget about the torture rooms, the capital punishment and the illegal war, of course.

Certainly, there's much less contradiction between Bush's public utterances and his professed private beliefs than there was in the case of Tony Blair. Blair voted for gay civil partnerships and the liberalisation of embryological research; and he did nothing to lower abortion limits. The moral has never been political in Britain in the way it has been in the States, of course; but it's glaringly obvious that Blair voted enthusiastically for policies which are in direct contradiction with the teachings of the church he has been so keen to embrace. Not to mention the war. So if they let him in, they would be unlikely to have much problem with Bush.

Burke even quotes Paul Weyrich, "an architect of the religious right", who says of the president "I think he is a secret [Catholic] believer". But what would be in it for Bush? Absolution for a whole raft of sins, I suppose. Validation. The ability to distance himself from all those redneck creationists who have been thus far his main cheerleaders (if that's what he wants). And, as he said himself, the pope is "awesome".
Email Post
Labels: Bush catholicism religion US politics

Olive said…
And, as he said himself, the pope is "awesome".