Apparently senior Iranian clerics are worried about the morally corrosive effect of Western toys. And well they might be. As Prosecutor General Ghorban Ali Dori Najafabadi pointed out in an official letter,

The appearance of personalities such as Barbie, Batman, Spiderman and Harry Potter and ... computer games and movies are all a danger warning to the officials in the cultural arena...The unrestrained entry of this sort of imported toys ... will bring destructive cultural and social consequences in their wake.

Najafabadi even coined a new word - "Westoxication" - to describe the pernicious influence of these toys on young minds. I rather like it, though it would be interesting to know the original Farsi: the idea, presumably, is that Western culture is a sort of mind-altering drug that leaves its addicts spaced-out, incoherent and unable to function properly. Perhaps it does work in such a way in a society which has not been jaded by decades of stealthily-coarsening tastes and lowered expectations. The custodians of Persian culture, brought up on the subtleties of Hafiz, might well look upon the vapid products of the West rather as the rulers of late Qing-dynasty China regarded the opium with which British traders insisted on doping their people in exchange for porcelain and tea. Though I suspect Dr Najafabadi is more worried about the irreligious nature of some of these toys.

Certainly, the mullahs have been fretting about Barbie for years. With her outrageously skimpy outfits and her presumably non-marital dalliance with the blandsome Ken, the plastic prom-queen is scarcely the best role-model for modest Islamic womanhood. The Guardian reports that "In May 2002, the Komiteh - the public morality police - cracked down on sellers of the doll, arresting shopkeepers and saying Barbie was improperly dressed." One shopkeeper interviewed had had $11,000 worth of stock seized. "Iranians love everything Barbie. I just can't understand it," he moaned. No, I can't understand it either. I guess that's Iranians for you.

It's unclear whether Barbie-deprived Iranians have been satisfied with the Shariah-compliant "Sara" which replaced her. According to The Guardian again, "She follows Islamic rules of dress and her brother, Dara - much like Barbie's boyfriend, Ken - is the male version of the doll." What's his job, I wonder? Is he there to make sure she doesn't insult the family honour by showing too much ankle? 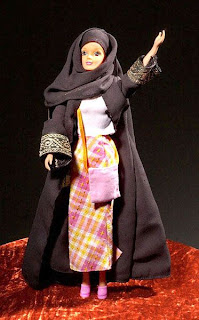 Like this trollop, perhaps: not Sara, but the most popular of the "Burkha Barbies", Fulla, who hails from Qatar. Altogether too liberal, those Qataris.

It's slightly less clear, perhaps, just what Iran's moral guardians have against the other figures mentioned. Perhaps Batman's soubriquet "the caped crusader" tells against him. Too many bad memories. As for Harry Potter, he does have a well-known tendency to annoy religious believers. Spider-man seems rather less obviously offensive, unless the ayatollahs have paid close attention to the first of the three films and noticed that the teenage Peter Parker's ability to make a white gooey substance shoot out from his wrists might be a metaphor for something.

It's easy to mock, or to become indignant. Even easier, perhaps, to look at cases such as this as further evidence of the alien and incomprehensible nature of the Islamic mind. (Though is it so different, I wonder, from the imperative felt by the guardians of the French Republic to defend their culture from the imperialistic designs of Ronald McDonald?) I prefer to look on the bright side. After all, as the aggrieved shopkeeper pointed out, "Iranians love everything Barbie". She, Batman and Harry Potter are the standard-bearers of secular modernity, before which the ayatollahs make their Canute-like gestures of defiance. Forget Fitna, never mind the fallout from the Rushdie, Theo van Gogh and Danish cartoon crises: the medieval-minded clerics who want to wrap the world in a chador are not winning. We are. It's a Barbie world.
Email Post
Labels: culture Iran

Heresiarch said…
I don't write that much about Islam: approximately 15% of this blog, by my calculation, is in any way Islam-related, which I think compares favourably with the situation on a typical BBC news bulletin. Some bloggers talk about nothing else.

I don't think you harp on about islam - actually I think you usually have something interesting to say when you do write about it, and that link to the Pakistan Daily News was that very rare thing, on a blog, a link that was both very welcome and startling.
1 May 2008 at 09:12

WeepingCross said…
I have to say that, apart from the dreadfully clashing pink and yellow on her lower limbs, Qatari Barbie looks startlingly well-dressed in my opinion.
1 May 2008 at 11:48

Heresiarch said…
Edwin - Shia genius. Fr WC: I suppose with oil going for $120 a barrel she can afford the odd designer frock. Presumably Sheikh Al-Ken will be picking up the bill.
1 May 2008 at 12:42