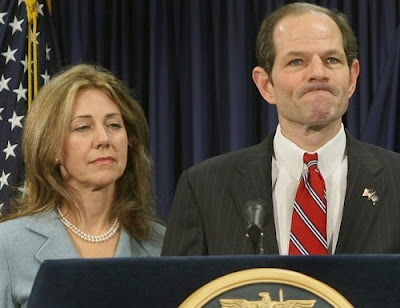 Much has been said, and written, of the humbling of Eliot Spitzer, the Mr Clean of New York who never let political expediency get in the way of a good shag. What has been so far lacking, though, is the voice of Islam. Step forward Ummah Pulse, a blog which claims to "represent the views of the mainstream - not the mythical 'silent majority' that the neocons tout but the vocal that cannot be heard because they have no platform or outlet."

In an article which attempts to locate the Spitzer scandal within the wider context of the decline of the west and the manifest superiority of Islam, Muhammad Tahir wonders about the source of the governor's apparent hypocrisy. How can a man dedicated to bringing down corporate miscreants and closing down the prostitution industry have been hoist so spectacularly by his own petard? On a personal level, perhaps we should give the Devil his due:

Muslims realize that Shaytaan makes extra efforts on those who seek to rectify others. We must realize that while we hold a special position in terms of conveying the Final Message of God's revelation to mankind, we must be at special guard to avoid falling prey to temptation, because those who oppose us will use our personal failings as grounds to denounce the message we are conveying.

So it's not just decadent westerners who can fall into temptation. Unfortunately (and here I can't be alone in detecting a strange non sequitur), cases like Spitzer's can only serve to further the evil designs of Richard Dawkins:

Modern opponents of religion ... premise most of their attacks on the assertion that organized religion is a fount of hypocrisy and insincere intentions. There are enough such high-profile examples of moral downfall in the modern press to make this accusation obscure any meaningful public dialogue regarding the almost laughable atheistic alternatives to religious morality that Dawkins et al propose.

Part of the blame, too, lies with Ashley Alexandra Dupré, here dismissed as "a shrewd (not to mention shameless) self-promoter who was simultaneously negotiating to secure the highest bid for the rights to have her appear less-than-fully-clothed while promoting her heretofore still-born music career."

You can practically smell the misogyny, can't you?

More importantly, though, the saga serves to underline "the profoundly ambiguous relationship Americans in particular and Western culture in general have with what were once universally scorned manifestations of moral vice." And yet they presume to "pillory" Muslims for "their 'stone-aged' conceptions of the role of women and the family in society."

What is the Islamic alternative to the pit of slime into which Western culture has descended? Floggings and stonings to death? Tahir has a different answer. Spitzer's sexual incontinency, he believes, could have been contained by the simple expedient of marrying the whore:

Certainly Ms. Dupré would have preferred sharing a husband to having to sell her body to pay the rent (I will at least give her the benefit of the doubt). Similarly, can all those Muslim feminists out there argue that the public humiliation Spitzer's wife, Silda Wall Spitzer, endured when it was revealed that her husband had been hiring prostitutes for the past TEN YEARS would be less than the universally agreed shame "modern Muslims" heap on anyone marrying more than one woman?

Well, all you Muslim feminists out there, have you an answer to that?

The dateline was April 1st, so perhaps it was just radical Islam's contribution to yesterday's hoaxathon. By UmmahPulse standards, however, it was relatively restrained: this was the website which, a few weeks ago, warned the world that the Turkish government's Hadith Project was part of a Vatican plot to destroy Islam. And it ends with a quote from the Koran: "And do not approach adultery: for it is a shameful (deed) and an evil which opens the road (to other evils)." No laughing matter, surely.

To what extent is Tahir's assessment - that the basic problem with the west in general, and Spitzer in particular, is not enough Islam - borne out in practice? We could, of course, go to seek answers in Iran. Plenty of Islam there, and also plenty of prostitution, sometimes disguised as "temporary marriage", sometimes punished with death, a fate even Sptizer probably doesn't deserve. Or we could look at a fortuitously-timed case study rather closer to home.

This weekend, the News of the World brought us the desperately sad and now world-famous story of Sufiah Yusof, the former maths prodigy now discovered working as a prostitute from a flat in Salford. The factors that have led her to this lamentable situation are many and varied: an abusive father who used to wake his children up by punching them in the face and is now a convicted sex offender, a probable breakdown in her late teens, an early and ill-advised marriage. 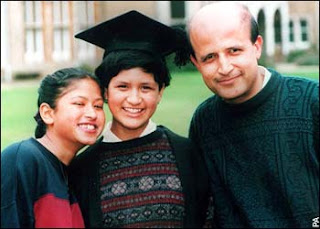 Lack of Islam, on the other hand, does not seem to have been the problem. From a devout family, by all accounts, she was fairly observant as a teenager. Her husband, a lawyer named Jonathan Marshall, had already converted to Islam before he met her. Tracked down by the Telegraph to Saudi Arabia, where he is working for a "leading City law firm", he put their failed marriage down to different priorities:

The reason we split was that I became more observant and Sufiah became less so. That took her in the wrong direction, away from the direction in which I wanted to go. The teachings of Islam are fundamental to your everyday life, so when paths diverge in that respect it is a major issue.

Perhaps she wanted to go out on her own. Or without a veil. Jonathan, who sounds like he would have been a complete prig in any religion, then adds:

"She was confused, really. She didn't know quite what she wanted. She wasn't ready to settle down. Basically, she wanted to be a student."

If Jonathan Marshall had spent less time with his Koran and more talking to his young bride she might not have ended up in this unhappy situation.

On a more positive note, there had been moves afoot in Malaysia, where her mother was born, to rescue the wayward prodigy. The Straits Times was reporting earlier today that a government minister had launched a "Save Sulfiah programme" which would "come up with strategies to assist Sufiah." Sadly, the minister for higher education later admitted that little could be done, apart from contacting the Malaysian Students Department in Britain. "We just can't bring her back," he said. "She is big now and can decide for herself. She has the right to do as she pleases."

The government is, however, proceeding with another plan it announced at the same time: to encourage an international blogging campaign against Fitna.
Email Post
Labels: gender politics Islam prostitution religion sexuality US politics

As for the Islamic view that multiple partners for men 'cures' adultery - it's a view for which there is no evidence in the real world, Men who go after women will still go after women even if they have 50 willing partners at home,. We all know this.
4 April 2008 at 09:25