Walk on the wild side

The most notable thing about this year's April 1st was that some of the most unlikely-sounding stories turned out to be entirely true. Like the Russian cult that has apparently spent the past several months hiding in a cave to await the end of the world. Or Nick Clegg's more than slightly quease-making revelations about his sex life. 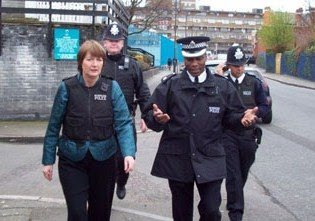 But the real April fool has to be Harriet Harman. As anyone who was listening to the Today programme was amused to discover, the Labour deputy leader has taken to walking about her constituency wearing an armoured police vest. If only for publicity purposes: showing solidarity with the boys in blue, being appropriately "tough" on the yobs who, as Time magazine embarrassingly reported last week, are fast replacing beefeaters, doddery vicars and top-hatted whoremongers as the face that this nation presents to the outside world. Peckham, of course, where Harman staged her ill-advised photo-op, was once home to lovable rogues Del and Rodney Trotter. Now it is the prey of vicious gangs, and only an armoured politician can save it. 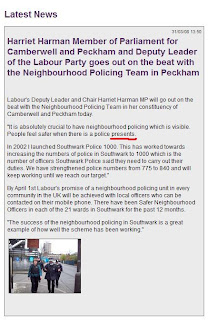 Fellow heretic Silas tracked down the official account of the tour at La Harman's website and discovered a clumsy and unlovely spelling mistake. "People feel safer when there is a police presents" she (or her lowly researcher) writes. "A police presents" sounds like some sort of song-and-dance show starring Met officers, no doubt involving a great deal of cross-dressing. However, I've checked back and, would you believe it, the mistake is no more. I believe congratulations are in order.

More importantly, the write-up reveals what the stunt was designed to achieve: highlighting an increase in police numbers. Large numbers of officers, in the strange world that politicians inhabit, equate to low crime and feelings of security, even if the police concerned are so busy filling in forms and harrassing motorists that they only venture onto normal streets in the presence of cameras. Of course, that wasn't the impression conveyed. As Philip Johnston noted in the Telegraph blog, the obvious conclusion was rather than "Peckham is too dangerous to walk through in broad daylight with a police escort."

Pressed by John Humphreys, Harman maintained that she was simply "wearing the kit", as though she had donned a hard hat on a construction site. But people visiting construction sites wear hard hats because, for health and safety reasons, they are required to do so. They're not trying to disguise themselves as builders - or, as was clearly the case here, attempting to associate themselves, in the public mind, with the heroic and selfless public service of members of the building trade. A closer analogy, perhaps, might be with the common practice among war reporters of donning military flak jackets while filing their accounts from the relative safety of the Baghdad Green Zone. It's not necessary, but it looks cool (or they think it does). Did Harman think she looked cool in kevlar? Perhaps she needs to find a new style consultant.

Johnston went on to point out an apparent contradiction in politicians' approach to law and order issues. "Even though both Ministers continue to swear blind that serious crime has fallen, they nevertheless behave in a way that belies that assertion. Yet they expect their own constituents to behave in a way that assumes it to be true." But this, I think, rather misses the true significance of Harman's stab-proof vest. And why her outfit was so semiotically misjudged.

The government does indeed like pointing to falling crime statistics as evidence of their success. But just as too much success would put the police out of a job, or the complete elimination of heart disease would be bad news for cardiologists, so the politicians can't capitalise on their promises to protect us from ruffians unless we first feel too scared to venture out of doors. So the message must strike a delicate balance. Yes, it should say, it's dangerous out there. But don't worry: here we are, being tough, so you don't have to be.

That wasn't quite what the image conveyed, though. Not only did it make an ordinary London street look like a war zone, thus making the government's much-vaunted toughness appear more than ever a failure, it also highlighted the sense of detachment that seems to have possessed most members of our political class. Ms Harman, privately-educated and related to the Longfords, is a representative of de haut en bas socialism at its most queenly. And as she deigns to visit the ragged proles who infest her constituency she can't be too careful. An accident of photo-op miscalculation it may have been, but it said a lot.
Email Post
Labels: Labour Politics