I see that the Lib Dems are moving ahead with their terribly important campaign against airbrushing, intimated in a speech last month by their Women's Issues spokeswoman Jo Swinson. A press release today urges people to complain about adverts featuring excessive use of digital smoothing, or in their words which "portray unrealistic and unhealthy body images". We're told that the Lib Dem campaign "has received backing from a range of organisations, including The National Centre for Eating Disorders, Girlguiding UK and leading academics." Do these people have nothing better to do?

The political heirs of Gladstone and Lloyd George find an Olay ad featuring Twiggy particularly irksome, in that the sixtyish Sixties veteran doesn't look her age. "It is frankly dishonest to advertise an anti-wrinkle cream and then airbrush out all of the wrinkles in the ad." Indeed it is. But there are already tough rules in place to deal with advertisements which make misleading claims. What the LibDems want is much broader - to begin with, a ban on all airbrushed images in advertising aimed at under 16s, who are assumed to be especially vulnerable, and then a requirement to state clearly on all advertisements if airbrushing has been employed.

It's true that airbrushing can have a dramatic effect on someone's appearance. Here, for example, is the former Europe minister Caroline Flint in her natural state, and how she looked in an Observer feature earlier this year. 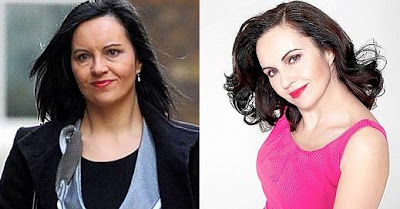 Like the demands earlier in the week to ban all alcohol advertising, this Lib Dem campaign is preachy and illiberal in equal measure. Its starting point - like that of most nannyish demands for censorship and precautionary bans - is that the public is terminally stupid and easily led astray, in constant need of protection. It also rests on highly dubious propositions - most dubious of all of which is the idea that anyone believes that normal people look anything like the pictures in magazines. Swinson is quoted as saying:

Adverts that feature heavily retouched images of perfect skin, perfect hair and perfect figures mean that women and girls increasingly feel that nothing less than perfect will do.

But how exactly is one supposed to entail the other? Normal people - normal women and girls, indeed - spend most of their lives interacting with other normal people, not living in a hermetically sealed box with only advertising images to inform them of what other people look like. And if people didn't already realise that airbrushed images were unrealistic then they'd soon find out - if only because we are constantly assaulted by media stories telling us how unrealistic they are. The Mail has long taken a special delight in offering up unairbrushed pictures of female celebrities - often in bikinis - for its readers edification. Not surprisingly, it leapt upon Swinson's comments last month to show the contrast between the "real" Twiggy and how she appeared in the Olay ad. But such exposés only make sense in a context in which every is fully aware of how artificial advertising images are. The next step, indeed, may well be to get rid of human models altogether in favour of computer generated human forms of truly Platonic perfection. I wonder how the Lib Dem policy would cope with that.

Even drawing attention to the obviously artificial nature of the fashion industry can been turned into a publicity stunt. Just last week we've had a publicity hoopla surrounding Lizzie Miller's protruberant stomach. The model herself claimed that the reaction was evidence that "the world is hungry to see pictures of normal women", yet went on to state that "I don't think the public understands how much smoke and mirrors are involved in making women look like that." Of course the public understands - that's precisely why the picture was so successful at generating headlines.

The divergence between the world depicted in the media - one not just of perfect bodies, but of constant health scares and ubiquitous criminality - is indeed an increasingly yawning chasm. That wouldn't matter too much if politicians (as well as those who work in the media itself) didn't grossly overestimate the impact these stories had on people. As it is, modern political debate is just as artifical as any airbrushed photograph, and considerably more damaging to society at large.
Email Post
Labels: advertising Lib Dems moral panic Politics Society