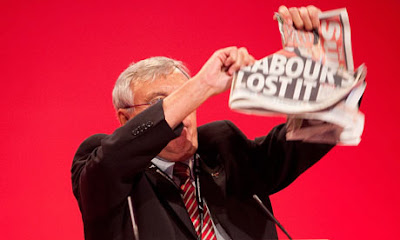 There are two big winners from the Sun's decision to back the Conservative Party at the forthcoming election. The first is David Cameron, obviously. The Sun's support probably didn't swing the last three elections. 1997 and 2001 were both walkovers with or without the Sun, and by 2005 its support was in any case rather half-hearted. But it adds to the sense of inevitability that already surrounds a Tory victory in 2010. The Sun is following rather than leading its readership - or rather it is following the Murdochs, who have decided (in common with most people) that Labour's lease has expired. To win the support of the Sun, Tony Blair and Alastair Campbell had to persuade Rupert Murdoch of two things: first, that New Labour was no threat to his media empire (which was relatively easy); and second that they were going to win the election. Even so - and even given the dire state of the Conservatives in 1997 - it was not until the announcement of the dissolution of Parliament came that the Sun showed its hand. That news broke like a thunderclap over the campaign, even though it only confirmed what everyone already knew, or ought to have guessed. Yesterday's development, by contrast, has been long anticipated. Only the timing, which smacks of a rather desperate marketing campaign, was a surprise. (Like other leading bloggers, the Heresiarch was sent a special email from a Sun journalist alerting him to this crucial political development).

As another Sun, the Chinese general Sun Tzu, said a long time ago, the supreme excellence in war lies not in winning a hundred victories but in subduing the enemy without a shot being fired. An army that knows it has already lost has no stomach for the fight - though there will usually be a small group of suicidal diehards determined to re-fight the Battle of Thermopylae. Gordon Brown in his truly lamentable speech yesterday tried to strike a note of Churchillian defiance. But by all accounts an air of fatalism pervades this year's Labour conference. It's not just that they think they'll lose. It's that a large proportion of them positively want to lose. They know that in many ways - not least economically - Labour has failed. They know, too, that they are hated, certainly more deeply than John Major's government was ever hated, and more widely than Margaret Thatcher's. Many of them also hate themselves: for betraying their principles, such as they believed them to be, but above all for being part of a party, and supporters of a government, now held in such widespread contempt.

Which is why the other main beneficiaries from the Soaraway Sun's defection will be in the Labour party.

The alliance between New Labour and the most influential Murdoch title always seemed a little strange, though I suppose Blair and the Sun might be said to have shared an enthusiasm for Big Brother. To many Sun journalists, including the former political editor Trevor Kavanagh, supporting Labour never came naturally. And the paper's support for the party of the Left and the big state never seemed to affect its general tone of braying right-wing populism. But then New Labour's tone, more often as not, was one of braying right-wing populism, a fact which for years disguised the historically revolutionary statewards turn the country took under their rule. Now that the economic crisis has revealed the true extent of the state's expansion during the Labour years, the Sun's continued support for the party would not merely seem jarring but look ridiculous.

Having the backing of the Sun might have been useful politically for the Labour party, but for many of its members it was troubling psychologically - like having an unwanted admirer who was nevertheless tolerated, even indulged. What, they may have wanted to know, does that paper see in us? What does it say about our party that the country's most loutish, most sexist, most naturally un-PC, most intolerant and least thoughtful newspaper wants to be our friend? That, certainly, seems to have been Harriet Harman's opinion. Harman - along with Mandelson the most significant beneficiary from the implosion of Brown's premiership - came close to openly celebrating the Sun's defection today. Claiming that the Sun "knows nothing" about "equality", and that "the nearest their political analysis gets to women's rights is Page 3's News in Briefs", she urged delegates to "get moblised".

Perhaps she does sound a little like a jilted lover suddenly discovering that she hated her boyfriend all along. But then she and the Sun have never had the easiest of relationships. Take this randon story from March. Under the headline "Harman misled MPs over Fred", we are told that the "blundering" Commons leader was forced to apologise over some trivial mistake involving an unpopular banker. A few days later, "Harperson says sorry (again)". Here we learn that Labour's deputy leader, described as "gaffe prone", had "issued a grovelling apology yesterday after making a rude remark to an actor". Another story from the same month accused her of having once supported legalising porn. Sun stories about Hattie come in three broad categories: her "gaffes"; her manoeuvring for the Labour leadership (with its implied disloyalty to Gordon Brown); and her sponsoring of politically correct laws. Just this Monday the paper was protesting against "potty" proposals to ban topless calendars in the workplace as sexual harassment.

Until today, Harman was unable to respond publicly to such attacks coming from what was, theoretically at least, a Labour-supporting paper. Now she is set free. So is the rest of the party. This afternoon union leader Tony Woodley - who hates the Sun as much as a Liverpudlian as Harman hates it as a feminist - ripped up a copy of the Sun to cheers from conference delegates. It was a moment of catharsis. The guilt of twelve years as the Murdochs' pet political party could be purged. And this must be the final irony: that the week the Labour party decided it loved Peter Mandelson, it also stopped pretending to love the Sun.
Email Post
Labels: journalism Labour Politics