Feminists who hate me 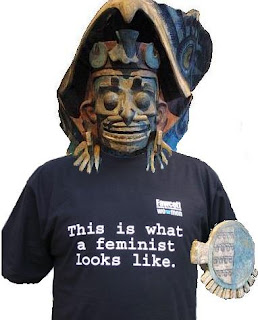 Here's what some American feminist bloggers and their readers have been saying about your long-suffering Heresiarch:

"One of those asshole dudes who believes that his important dudeliness qualifies him to lecture the feminists on the nature of feminism... he's quite a peach"

"I get these feminists-suck-at-feminism guys all the time. They got no argument, because they don’t know what feminism is; they just hate women."

"Maybe the dude should stick to giving lectures to head injury victims about how it feels to be brainless and sensitivity deprived... What is he teaching, Male Entitlement Asshattery 101?"

"Cluelessness is no excuse"

"You sound like someone with the arguing abilities of Vicky Pollard."

Some of these eloquent (and, I've no doubt, thoroughly merited) denunciations follow on from a withering assessement of the Heresiarch's efforts on something called Fannie's Room (Lynne Truss is right, it does matter where you put an apostrophe). The worst, though are on I Blame the Patriarchy, which helpfully explains itself thus:

I Blame The Patriarchy is intended for advanced patriarchy-blamers. It is not a feminist primer.

From my cheerfully-admitted position of ignorance, the advanced patriarchy-blaming on display here doesn't sound especially, erm, advanced. Still, the Heresiarch is delighted to have been singled out by the advanced patriarchy-blamers as a patriarch worth blaming. No doubt it brought respite to their lives of grinding oppression under the prevailing patriarchalist dispensation. I leave it to you, gentle reader, to determine whether I deserved it, or whether my detractors in the sisterhood may, just possibly, protest too much.
Email Post
Labels: Afghanistan blogging gender politics Politics