Public Policy Polling conducted a national poll over the weekend into Americans' belief in two politically contentious and, in their different ways, bonkers ideas: 9/11 "Truthism" and Obama "Birthism". The former is the idea that the attacks of September 11 2001 were an inside job of some kind (ideas vary from the claim the Bush administration were warned in advance and did nothing to the suggestion that the US government - or the Israelis, or both - planned and carried out the atrocity). The latter is the notion that Barack Obama is not legally qualified to be president, because he was born outside the borders of the United States, possibly in Kenya, and that there has been a conspiracy to conceal this fact.

Here are the results. 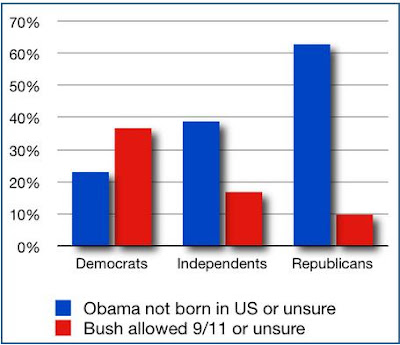 As you can see, a majority of Republicans are suspicious of Obama's birth certificate (though "only" 42% asserted that the president was definitely not an American). Far fewer Democrats have such doubts. On the other hand, one in four Democrats believed that "President Bush intentionally allowed the 9/11 attacks to take place because he wanted the United States to go to war in the Middle East" - a further 12% were unsure. Compared to earlier findings, this represents a considerable increase in gullible Republicans, and a decline in gullibility among Democrats (a similar poll in 2006 had found a clear majority of Democrat voters with suspicions about 9/11). Some have taken this as evidence that there are more stupid Republicans than brainless Democrats. But it may just be that, with their president in power, Democrats have become less susceptible to the false comforts that belief in conspiracy theory provides.

It isn't, of course, particularly surprising that people are more likely to believe a conspiracy theory if it is politically congenial to them. It's one form of confirmation bias, which you find everywhere in politics. If you support one party, you're likely to believe positive stories about your leader and negative ones about the leader of the other party. I have constantly to battle the confirmation bias that tells me that the Conservatives will be an improvement on such things as civil liberties or the nanny state, despite considerable evidence to the contrary. There may well be deep-seated neurological reasons for this, or it may just be, as Hume believed, that reason is the slave of the passions. Conspiracy theories, too, tend to reflect, in a mythological way, deeper perceptions. 9/11 did come as a godsend to those in the Bush administration who were looking for an excuse to invade Iraq, for example; while to a substantial minority of Americans Barack Obama simply doesn't look like a US president (nor does his name sound like one). Truthism and Birthism are both examples of wishful thinking. That Republicans should be more prone to wishful thinking at the present time says something about the GOP's current predicament, perhaps.

The preference for Birthism above Truthism among independents is also rather telling. It doesn't necessarily mean that it's more plausible, merely that its proponents are currently more active (online, especially) than their Truthist equivalents. After all, 9/11 is slipping into history; those who doubt the mainstream account will soon be consigned to the same cultish milieu as JFK obsessives or Roswell watchers. Whereas those who doubt that Barack Obama was born in Hawaii can tell themselves that they might actually be able to change things.
Email Post
Labels: Bush conspiracy theory Obama Politics US politics