Dr Samuel Johnson argues that "the present state of many of our papers is such that it may be doubted not only whether the compilers know their duty, but whether they have endeavoured or wished to know it."

This is guest post on the occasion of the doctor's 300th birthday. 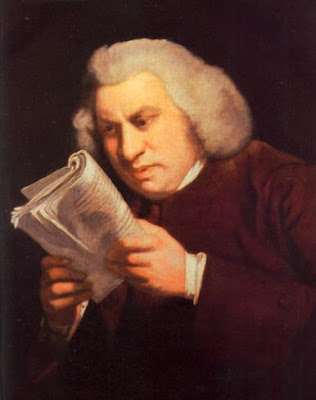 A journalist is an historian: not indeed of the highest class, nor of the number of those whose works bestow immortality upon others or themselves, yet like other historians he distributes for a time reputation or infamy, regulates the opinion of the week, raises hopes and terrors, inflames or allays the violence of the people. He ought therefore to consider himself as subject at least to the first law of history, the obligation to tell the truth. The journalist, indeed, however honest, will frequently deceive, because he will frequently be deceived himself. He is obliged to transmit the earliest intelligence before he knows how far it may be credited; he relates transactions yet fluctuating in uncertainty; he delivers reports of which he knows not the authors. It cannot be expected that he should know more than he is told, or that he should not sometimes be hurried down the current of a popular clamour. All that he can do is to consider attentively, and determine impartially, to admit no falsehoods by design, and to retract those which he shall have adopted by mistake.

This is not much to be required, and yet this is more than the writers of news seem to exact from themselves. It must surely sometimes raise indignation to observe with what serenity of confidence they relate on one day what they know not to be true, because they hope it will please, and with what shameless tranquility they contradict it on the next day, when they find that it will please no longer. How readily they receive any report that will disgrace our enemies, and how eagerly they accumulate praises upon a name which caprice or accident has made a favourite. They know, by experience, however destitute of reason, that what is desired will be credited without nice examination; they do not therefore always limit their narratives by possibility, but slaughter armies without battles, and conquer countries without invasions.

There are other violations of truth admitted only to gratify idle curiosity which are yet mischievous in their consequences, and hateful in their contrivance. Accounts are sometimes published of robberies and murders which never were committed, men's minds are terrified with fictitious dangers, the public indignation is raised, and the government of our country depreciated and contemned. These scribblers who give false alarms ought to be taught by some public animadversion that to relate crimes is to teach them, and that as most men are content to follow the herd, and to be like their neighbours, nothing contributes more to the frequency of wickedness than the representation of it as already frequent.

There is another practice of which the injuriousness is more apparent, and which, if the law could succour the poor, is now punishable by law. The minute descriptions of men whom the law has not considered as criminal; and the insinuations often published in such a manner that, though obscure to the public, are well understood where they can do most mischief; and many other practices by which particular interests are injured, are to be diligently avoided by an honest journalist, whose business is only to tell transactions of general importance, or uncontested notoriety, or by advertisements to promote private convenience without disturbance of private quiet.

Thus far the journalist is obliged to deviate from the common methods of his competitors by the laws of unvariable morality. Other improvements may be expected from him as conducive to delight or information. It is common to find passages in papers of intelligence which cannot be understood. Obscure places are sometimes mentioned without any information from geography or history. Sums of money are reckoned by coins or denominations of which the value is not known in this country. Terms of war and navigation are inserted which are utterly unintelligible to all who are not engaged in military or naval business. A journalist, above most other men, ought to be able to judge what will be plain and what will be obscure; what will require a comment, and what will be apprehended without explanation. He is to consider himself not as writing to students or statesmen alone, but to women, shopkeepers, artisans, who have little time to bestow upon mental attainments, but desire, upon easy terms, to know how the world goes; who rises and who falls; who triumphs and who is defeated.

If the writer of this journal shall be able to execute his own plan; if he shall carefully enquire after truth, and diligently impart it; if he shall resolutely refuse to admit into his paper whatever is injurious to private reputation; if shall he relate transactions with greater clearness than others, and sell more instruction at a cheaper rate, he hopes that his labours will not be overlooked. This he promises to endeavour; and, if his promise shall obtain the favour of an early attention, he desires that favour to be continued only as it is deserved.