Among the torrent of generally ill-informed speculation and sensationalism that has attended the rediscovery of Jaycee Lee Dugard (one day we learn that her girls are avid fans of Hannah Montana, the next that they've never watched TV in their lives) there's been a great deal of cod psychology. Many have been the half-baked attempts to peer into "the mind of the monster" Philip Garrido. Not a few journalists, starved of information as the three survivors have entered into a new, even deeper but one hopes temporary seclusion, were terribly excited the other day by the photographs of the Garrido home and its associated tent city. As in some deranged Hello! magazine profile, we were shown round what the News of the World called "the foul compound of horror", with its "sad array of worn and broken toys and possessions, vying for space with piles of the Garridos' dumped household junk". 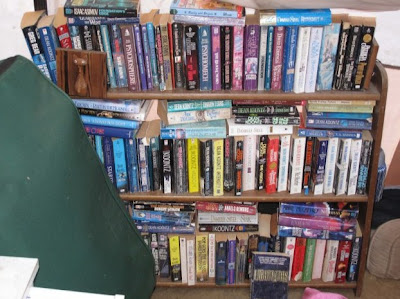 Particular attention was paid to Garrido's bookcase, which contained a large number of horror, fantasy and crime novels, many of them by Dean Koontz. In the Telegraph, Philip Sawer suggested that the books were "testament to the warped and obsessive character of the man who snatched 11-year-old Jaycee off the street, and kept her prisoner until the age of 29", although there must be many perfectly normal people who also collect everything written by their favourite author. Sawer even thought to note that the books were "dog-eared" and "highly thumbed", as though that added a further dimension of creepiness. Reading a Dean Koontz novel once, I suppose the message was, might be considered just about acceptable; re-reading one is a sure sign of a psychopath.

Koontz, Sawer wrote in alarmed tones, was a "prolific American author whose disturbing novels incorporate horror, crime, science fiction and mystery and whose main protagonist is frequently a sociopathic monster." Clearly these books are dangerous and should be banned - perhaps under Baroness O' Cathain's proposed law against "extreme writings". After all:


Koontz's novel Intensity, a copy of which has been placed at the centre of Mr Gorrido's bookshelf, features a delusional character called Edgler Vess, whose warped beliefs and sociopathic tendencies have made him serial killer and rapist. At one stage Vess keeps a young girl prisoner in his basement.

...A number of Koontz's other novels also feature horrific kidnappings, including in one case that of a child. One of these, Forever Odd, is among the books police found in Garrido's home.

Sawer quoted the expert opinion of Dr Abigael San, a clinical psychologist "who has studied the emotions of sex offenders", that Garrido "appears to have found something in these books which mirrors his own psyche". In response, Gill Hornby sympathised with Koontz in his imagined embarrassment:


it turns out he's the bogeyman's favourite author. That's the trouble with being a writer: you can't pick your readers, and you can't control how they take your work and use it to define aspects of themselves.

But look what I spotted today. In an interview Tina Dugard, Jaycee's aunt and the first family member to speak extensively to the media, told the OC Register that the kidnap survivor "read a lot". "She likes mysteries," she added.