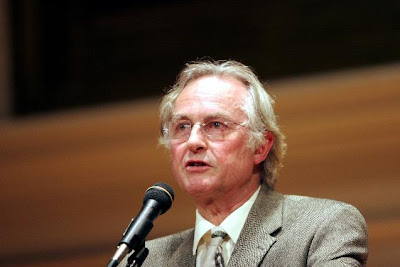 Richard Dawkins won quite a few friends among Liberal Democrats in Bournemouth on Sunday, delivering a rousing message in the main hall on the iniquity of the libel laws and announcing himself as a long-term LibDem voter. The following evening it was a different story. A large crowd packed the Premier Inn to hear what had been billed as "Reason under threat – the war on irrationality" (No, the title doesn't make sense: it should either be Unreason under threat... or ...the war on rationality; but no matter.) A joint meeting of Humanist and Secularist Liberal Democrats, the British Humanist Association and Dorset Humanists, it was one of the most sought after events on the conference fringe. Expectations were high. The Prof, though, seemed to regard the event as just another stop on his book tour. His "speech" consisted of little more than readings from his latest page-turner, The Greatest Show on Earth, padded out with some asides and a Q&A at the end. The longest selection seems to have been taken from a chapter which was extracted in the Times last month.

For a certain type of Dawkins groupie, even being in the same room as the great man is excitement in itself. "OMGZ! I just totally asked Richard Dawkins a question about faith schools!!!" tweeted Mark "Reckons" Thompson excitedly from the hall. One elderly lady was so overcome with emotion that she collapsed and had to be carried out by paramedics. Others, though, felt rather short changed by the whole event. Speaking to some people who had been there at another fringe meeting yesterday, the Heresiarch detected a murmur of disappointment at the Dawk's failure to deliver something more audience-specific - or, indeed, to say anything remotely new.

According to Mark's write-up, Dawkins compared evolution deniers to Holocaust deniers (how Godwin of him) and came out with his usual schtick about how there's no such thing as a "Muslim child" or a "Catholic child" - which is, of course, nonsense. There are plenty of Muslim and Catholic children - it's just that some of them manage to grow out of it. "He pointed out that you would never label a child a Monetarist child or a Keynesian child!" No: but you see small kids wearing Man United shirts, don't you? Dearie me.

I'm sorry, folks, but Richard Dawkins increasingly resembles the later Frank Sinatra, free-wheeling it through the tunes that made him famous and cheered to the rafters because - wow, it's him, it's really him, IN THE FLESH. Or perhaps these events are more like pep rallies. The fact that we've heard it all before, sometimes in the same exact words, doesn't matter. In fact it's comforting, like a familiar liturgy. If we're being honest, he hasn't had an original thought in years. This latest tome, for example, is aimed at convincing readers of the truth of evolution - and I'm sure it does that job very effectively, though I haven't read anything more than the Times extract. As Dawkins has said many times, Darwin's big idea is so very simple that, unlike most scientific theories, almost anyone can grasp it in minutes. All else is exemplification and evidence. There's actually very little to say - which doesn't stop Britain's Leading Public Intellectual from saying it over and over again.

All Dawkins books about evolution are basically the same. There's a memorable metaphor: in The Blind Watchmaker it was a blind watchmaker; in Climbing Mount Improbable it was a mountain of improbability; in The Ancestor's Tale it was the idea of ancestry. There's tut-tutting aimed at Creationists and other people too stupid to see the obvious truth of evolution. As a general rule, the more recent the book, the more moaning about Creationism it contains. There are The Facts, which are always fascinating and well-chosen, though occasionally one will have heard them before. And there are the awe-struck reviews - because, you know, nobody does it better.

But what's the point of this latest doorstopper, though? To convince Creationists? If that is Dawkins' aim - and he does write "Evolution is a fact, and... no unbiased reader will close the book doubting it" - then he will surely fail. Anjana Ahuja put it well:

Dawkins does nothing to encourage his opponents to read him and everything to push them away. He is liberal with his use of the word “ignorant”, occasionally prefacing it with “fatuously”, and a master of what I would call the “asnide”, which are barbed digressionary footnotes. In one, he quotes the zoologist Peter Medawar’s observation that “the spread of secondary and latterly of tertiary education has created a large population of people, often with well-developed literary and scholarly tastes, who have been educated far beyond their capacity to undertake analytical thought”. And yet he hopes to convert those who he simultaneously deems innately thick.

But then how many Creationists are ever likely to buy the book? About as many as there were in the audience on Monday evening, I suspect.