Bandar in a bind 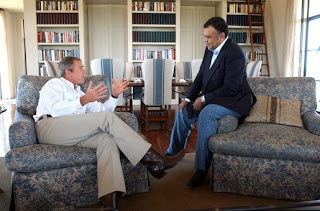 The Sunday Times has a delicious story buried away in its business pages today. Apparently, Prince Bandar bin Sultan of Saudi Arabia, a former ambassador to the court of George Bush, has had some of his US assets seized by court order, as part of an investigation into the BAE Systems bribery scandal. That's the same case that was halted in Britain on the personal orders of Tony Blair (and almost certainly illegally) when it emerged that the Saudis didn't like the Serious Fraud Office poking their noses into the "culturally specific" way business is conducted in that part of the world. Blair, you may remember, invoked the "national interest", playing up an implicit threat that the Saudis would stand by and let their old friend Osama unleash death all over London, unless our police stopped querying why BAE won contracts in the country by handing over large quantities of dosh. $2 billion of it, if reports are to be believed. Much of it probably British taxpayers' money, considering how much BAE's weapons systems are subsidised.

Under the terms of the order, granted on a petition from a Michigan pension scheme, Bandar won't be able to transfer back to Saudi Arabia the money he makes if he manages to sell his mansion in Aspen, Colorado, currently on sale with an asking price of $135 million. Says the Times,

The 56,000 sq ft main residence is bigger than the White House and has 15 bedrooms, 16 bathrooms, an indoor swimming pool, steam and exercise rooms and includes a private children’s wing with four bedroom suites and a sitting room. The estate spans 95 acres, includes two 15,000 sq ft guest houses, tennis and racquetball courts and equestrian facilities. It even has a dedicated waste-water treatment plant, a car wash and petrol pumps. 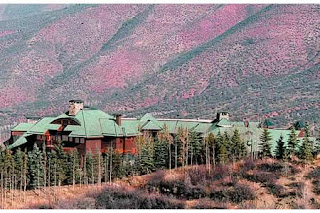 Still, he's unlikely to be cast out onto the streets.

Prince Bandar's strange relationship with the Bush family was, you may remember, a central concern of Michael Moore's flawed documentary film Farenheit 9/11. So close is the princeling to the Bushes that George Snr and Barbara supposedly regard him as a sort of honorary son, "Bandar Bush". And Bandar has been more than happy to pass lucrative contracts to companies carrying the imprimatur of the Bush clan. Thus far, everyone has been happy.

They understand dynastic succession in Saudi Arabia. It's the notion of an independent judiciary they find a little more difficult.

If he's as influential as Moore claimed, it's unlikely that Bandar's assets will remain frozen for long. But of course, Bush won't be around to protect Bandar for much longer. Unaccountably (and this must really be puzzling for poor old Bandar) we know that whoever the next president is, it won't be a Bush.

The mafia family that controls the laughingly-called "kingdom" of Saudi Arabia in unholy alliance with a collection of religious primitivists is, of course, a by-word for greed, corruption and hypocrisy. They're more than happy to promote virtue and tackle vice at home, by such expedients as letting the religious police round up women using their laptops in Starbucks (scandalous - there might be men present! Unrelated men!) because they don't have to suffer the consequences of all this neo-medieval barbarism. Although often their wives do. Saudi princes are more likely to be found gambling their ill-gotten millions away in the casinos of Monte Carlo and Las Vegas, or snorting cocaine in the company of expensive whores, than following the strict tenets upheld by the Wahhabi clerics of their homeland.

And yet this kind of decadent corruption is, as the usual British proponents of realpolitik are rarely slow to point out, our only defence against "extremism". The present king, Abdullah, is even said to be a reformist. He generously pardoned the young rape victim who had been sentenced to 200 lashes for her sinfulness, and it has even been whispered that he might one day allow women to drive. It would be good if he could reform himself and his anchronistic depotism out of existence before there's a revolution and BAE's lovingly crafted weapons fall into the hands of less hypocritical true believers. But I think we're playing with fire. And firepower.
Email Post
Labels: Bush Saudi Arabia