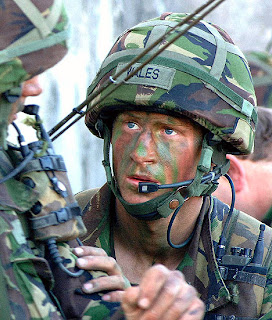 News reached the Heresiarch several weeks ago that Prince Harry was on active service in Afghanistan. Indeed, anyone poking around in the comments sections of certain websites could have found sufficient information to join the dots. It was, in fact, widely known in journalistic circles that there was a major suppressed news story involving a member of the royal family, and that national security was involved. It was also noticed that Prince Harry had not been seen in public since December. It wasn't too difficult to work out what was going on.

I pondered, briefly, whether I should share this information with the world. But, coward that I am, I decided that I had better not. I wouldn't want a visit from the Men in Black. My understanding was that the story was subject to a D-Notice or gagging order. It turns out, though, that the information did leak out, on Jan 7, on the "New Idea" lifestyle e-zine of Australian Yahoo. Here's the proof. Said their report:

New Idea can exclusively reveal that despite opposition from senior members of the British government and the royal family itself, Harry now joins his uncle Prince Andrew as a royal who has been to war.

Why this story was completely ignored, yet today's revelation by the Drudge Report has gone around the world, is something I wouldn't want to speculate about. It now, however, appears that the BBC are running full scale embedded reports about the prince's military exploits against the Taliban, complete with interviews with HRH. They were all ready to drop into the schedules when the time was right. Officially, this is part of a quid pro quo for the media's reticence in not reporting the events. But it all sounds a bit cosy to me.

According to Sir Richard Dannatt, the army Chief,

I am very disappointed that foreign websites have decided to run this story without consulting us.

This is in stark contrast to the highly responsible attitude that the whole of the UK print and broadcast media, along with a small number overseas, who have entered into an understanding with us over the coverage of Prince Harry on operations.

There's no news yet as to whether the prince will stay in Afghanistan. But if the Taliban were seriously interested in targeting him, they're unlikely to be surprised by this revelation. Not that they could have done much with the information. Helmand Province is a big place, and one British soldier looks much like any other from a distance. It's understandable, after the media storm over Harry's aborted deployment to Iraq, that the Ministry of Defence wanted to keep the lid on the story for as long as possible. But Dannatt's statement sounds uncomfortably like a celebrity PR protecting an exclusive wedding deal with Hello! magazine.

UPDATE: There was a fascinating discussion about media secrecy on Channel 4 News this evening. It seems that the Harry story was less a matter of official secrets and more a case of a cosy stitch up, with all the nation's editors agreeing to say nothing. Jon Snow was being particularly self-righteous, complaining that it made Britain seem like China or Putin's Russia. But of course Channel 4 was as much a part of the cover-up as anyone else, and as much its beneficiary, running a lengthy exclusive report of its own (which was most notable for Harry's discussion of his lavatorial functions - "If I need a shit - sorry, I can't say 'shit' - whoops, that's twice").

Has there been such a cover-up to protect the royal family since the days of the Abdication crisis? You bet there has. Just ask Viscount Linley.
Email Post
Labels: Afghanistan BBC journalism Prince Harry royalty