According to a story in yesterday's Telegraph, Professor Terry Eagleton is set to use a forthcoming Lent Talk, commissioned by Radio 4 in an attempt, one assumes, to stir-up a publicity-friendly controversy, to tell Christians to stop exaggerating the Crucifixion.

It wasn't that bad, he thinks. In fact,

All things considered, he got off pretty lightly. If the New Testament account is to be believed it took him only three hours to die whereas a lot of those killed by this hideous mode of execution thrashed around on their crosses for days.

The professor recalls listening, as a Roman Catholic schoolboy, to sermons in which the death of Christ was described as "the most excruciating form of torment any human had ever endured". Such claims are, he thinks, "absurd".

No doubt it was more of a singalong, like the ending of Life of Brian. 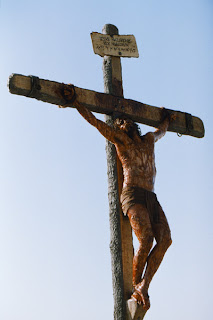 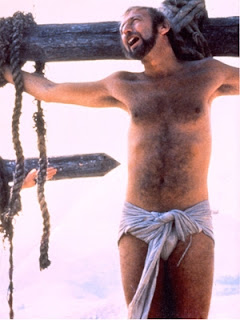 For good measure, Eagleton goes on to attack modern Christians who, he believes, are

Probably the world's last living Marxist (unless you believe Fidel Castro is still alive) Eagleton has recently cornered the market in finely-tuned rhetorical pot-stirring, as his notorious spat last year with Martin Amis showed. To help this latest (and by comparison trivial) row get off to a good start, the Telegraph dutifully rounded up some "outraged traditionalists" to condemn the prof's remarks.

Tony Kilmister, a vice-president of the Prayer Book Society, said:

Terry Eagleton is totally belittling of Christianity. How would he like it if he was strung up and scourged, let alone nailed to a cross?

You would think that the BBC would let Christianity have a free run in the run-up to Easter, rather than handing the microphone to a Marxist.

While the Bishop of Durham, Tom Wright, said that Eagleton "should get out more", that he was repeating "caricatures of Christianity" that do not "reflect reality" and that the professor should get his facts straight: "Jesus took six hours to die on the cross, not three".

The Heresiarch thinks Eagleton has a point. There are worse ways to die. Being flayed alive - which was the fate of Christ's disciple Bartholomew, among others - has always struck me as particularly unappealing. Likewise being boiled in oil. Or being slowly cooked, as happened, if I remember correctly, to St Lawrence. And crucifixion itself can be made worse. The Japanese, who specialised in this form of execution, refined a technique for inserting spears into the victim on the cross.

According to Giles Milton:

It was said that the most expert torturers could insert sixteen spears into a body without piercing a single organ...The executioner, observed the Florentine adventurer Francesco Cartletti, "pierces the sufferer's body with a spear, thrusting it into the right side upwards and out above the left shoulder, thus passing through the whole body". This was repeated on the other side of the body, so that the spears crossed internally. Sometimes, so many spears were employed that the condemned man looked like a giant hedgehog.

By comparison, Jesus may indeed have "got off lightly". What Eagleton is presumably objecting to, as his memories of his Catholic childhood show, is the kind of sado-masochistic wallowing in the agony of the crucifixion which has been a staple of Christian art from Grunewald's altarpiece to Mel Gibson's unwatchable piece of torture-porn, The Passion of the Christ.

Christian evangelism is obsessed with the moral and theological implications of Jesus' pain. The more pain, it seems, the better. One testimony I found online, by Dr C. Truman Davis (an eye specialist), is typical;

About a decade ago, reading Jim Bishop's The Day Christ Died, I realized that I had for years taken the Crucifixion more or less for granted -- that I had grown callous to its horror by a too easy familiarity with the grim details and a too distant friendship with our Lord.

I have no competence to discuss the infinite psychic and spiritual suffering of the Incarnate God atoning for the sins of fallen man. But it seemed to me that as a physician I might pursue the physiological and anatomical aspects of our Lord's passonate some detail. What did the body of Jesus of Nazareth actually endure during those hours of torture?

And so he sets out to discover the unpleasant truth, which I'll spare you, concluding that it has been:

a terrible sight, and more than enough to leave us despondent and depressed. How grateful we can be that we have the great sequel in the infinite mercy of God toward man -- at once the miracle of the atonement (at one ment) and the expectation of the triumphant Easter morning.

It's not just the obsession with pain, it's the notion that the pain has religious significance that bothers me. What accounts of the crucifixion like this trade on, alongside the sheer morbid (and occasionally quasi-sexual) thrill of immersing oneself in contemplation of the agony and the gore, is a sort of emotional blackmail. Jesus died for YOUR sins, they say. Not just died, moreover, but died HORRIBLY. Therefore, the illogical syllogism continues, you should feel grateful. You should become a Christian. Why? Because IT HURT. To not believe in Christianity is thus presented as a kind of monstrous ingratitude.

As Satan puts it in Jerry Springer the Opera, "always with the Crucifixion!".

It reminds me a bit of a recent edition of BBC2's Horizon in which former Tory minister Michael Portillo was gassed, asphyxiated and spun in a giant centrifuge as part of an investigation into methods of execution. At least that's what they told him. He came to the conclusion that "oxygen deprivation" was the most humane and efficient way to go, "euphoric" even, a finding that a pro-capital punishment US lawyer described as "morally disgusting". He wanted the criminal to suffer (like Jesus suffered?). If it's not hurting, it's not working, I suppose...

Well I'm sorry. I hope Eagleton's right, and the crucifixion wasn't quite as bad as Mel Gibson presented it. I hope Jesus did "get off lightly", though I rather doubt it. He seems to have been a decent, well-intentioned sort of fellow, even if he was under the impression that he was some sort of Messiah. But whether his death was short and merciful or long and lingering is not my fault, and I certainly don't want my immortal salvation to depend on someone else's agonising death.

Thankyou for a good post covering a lot of interesting issues. My thoughts, from a Roman Catholic perspective, follow.

When it comes to the issue of Jesus dying 'for our sins', i think it is a mistake to be too facile about it and present it as a straightforward transaction where his death 'pays' for our sins. Rather, he sacraficed his life in order to show us our state of sin more clearly. Also, another sense in which he 'died for our sins' is that he was killed for the blasphemy of claiming he could forgive sins, which is rightly the perogative of God alone.

On the significance of Jesus' pain, I don't think Jesus was trying to win in a competition to be the most tortured human being ever. It seems obvious that there are others who have been through experiences that are equally horrendous, and even worse! I think the (theological) point of the crucifixion is that God allowed himself to become subject to the same suffering and evil that we are subject to. This means that when we suffer we are not alienated from God, because he knows about suffering, too. Other faiths' conception of God as aloof and powerful and unwilling to stoop to our level seems to me to be much less loving than this God who condescends to be like us (in all but sin). I think you are right to argue against those who pull the emotional blackmail line.

I also think you are right that Eagleton's talk is about generating publicity, and it seems his is being more than a little disingenuous. His attack on 'modern Christians' for not siding with the poor is silly, and patently untrue. Parish churches collect money for all manner of good causes, not to mention food and toiletries for the likes of asylum seekers and the homeless. I'm not sure why he thinks us christians are horrified by the female breasts. I happen to quite like them.

I think it is a stretch to call the traditionalists 'outraged' - the kind of adjective a local paper drops in to spice up their bland journalism! When i read the source article, it sounds more like the words are accompanied by a sigh of resignation.

OK, so Jesus' crucifixion is not your fault. What IS your fault is your own sin, and that is the message Jesus came to bring to you, along with the good news that you can be forgiven! I don't think he wants you to feel guilty that he had to die for you to get the message, tho!
3 February 2008 at 23:49

I'm sure you're right that any God worth believing in wouldn't want us to feel guilty about the Crucifixion. That's not the impression one often gets from churches, however. From evangelical Protestants, the atonement is often presented as a sort of "transaction", at least that's what I hear. And as for your lot, Catholic guilt isn't a cliché for nothing. I'm sorry, but Catholic religious art is blood-bespattered to an alarming degree. Or what about the cloying sentimentality of the Stabat Mater?