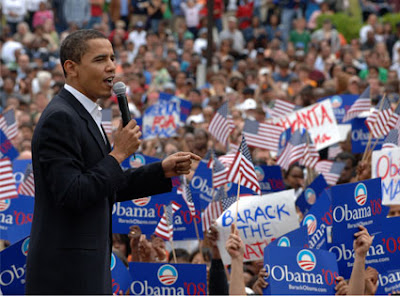 Now that Barack Obama has the Democrat nomination (almost) in the bag, one thing should be glaringly apparent: he's made of teflon. None of the mud will stick. The guy who claims he had sex and cocaine with the Illinois senator in the back of a Las Vegas limo, the claims of plagiarism, the whispering campaign attempting to link Obama supporters to radical Islam, the brainless smearing Michelle Obama for being insufficiently "proud" to be an American: none of it seems to matter. No-one's listening, for one thing: what the Clinton camp, who are deeply implicated in some of these stories, have failed to realise is that increasing numbers of Americans actively want Obama to succeed. Like Bonnie Tyler, they need a hero, and now they appear to have found one it's positivity all the way. Even if there were substance in the stories (which I don't believe) it probably wouldn't do the Obama campaign much damage. At least not at this stage in the campaign. He is, as they say, on a roll.

There are those who find the candidate's seemingly unstoppable momentum, and especially its unrelenting upbeatness, somewhat disconcerting, even sinister. "Obamamania", they complain. There are reports of women fainting at rallies, and other reports subtly insinuating that the fainting women have been planted. Obama is accused of acting like a Messiah, or even believing he is one; and, if you want to experience the nuttier fringe element, try googling "Obama antichrist". Some talk of an "Obama cult". In the Mail of Sunday, Peter Hitchens absurdly compared an Obama event to a Nazi rally:

A Left-wing friend has emailed me a YouTube Obama propaganda video that reminds him - in technique - of Leni Riefenstahl's Hitler-worshipping film Triumph Of The Will. I see what he means. To an insistent beat, impossibly beautiful, multiracial young men and women endlessly repeat the slogan "Yes, we can", in a disturbingly mindless way.

The thing contains no thought, no argument - just Obama worship.

"Yes we can" may be a fairly empty slogan - and nicked from Bob the Builder, to boot - but it's hardly "Sieg Heil". And, from a British perspective, it makes a refreshing change from the finger-wagging moralism of New Labour, who seem much of the time to be saying "No you can't". Besides, enthusing a crowd is in itself morally neutral. Hitler's rhetoric was dangerous only because his message was evil. He wanted his followers to beat up Jews and invade Poland. Obama wants his supporters to make America a better place, or at least to believe that such a thing is possible. There's a difference.

The more serious detractors complain that Obama lacks substance: this, of course, is the main plank in Hillary Clinton's faltering attack, that she has the experience, he merely the aspirations. On one level, of course, this charge is nonsense: Obama has a solid record as a legislator both at state and federal level. But there is something to the Obama campaign that lifts it, and him, far above anything that can reasonably be connected with his real achievements, or, indeed, the likely achievements that he would be able to effect in the White House. There is an undeniably delusional quality to some of the fervour that encompasses him. It floats on a cloud of rhetoric. There's a lot of hot air.

Is this a bad thing? Not necessarily. Hot air is an unfairly maligned substance. Hot air rises. It fills out empty packages. It is hot air that enables eagles to soar and gliders to glide for miles. It can power balloons across oceans. It's usually preferable to the alternative, which is cold water. Of course, talk is no substitute for action, or work, or actual accomplishment; but it can make these things happen. Churchill had little going for him in 1940 besides rhetoric. He said as much himself: "I have nothing to offer but blood, toil, tears and sweat." But his words made the difference. Today, with the world economy facing potential crisis, we need a figure at the helm exuding optimism and belief. Depression is, after all, a condition of the mind. Save the cynicism for the good times.

Obama's major message, of course, is "change". That most hackneyed of political pitches, "time for a change", has perhaps never seemed more pressing, or more appropriate. George Bush's blundering foreign policy and simplistic utterances have trashed America's image around the world, and Americans increasingly know it. Michelle Obama may have been lambasted by right-wingers - how dare she question the sacred truth that all decent Americans walk around coddled in a microclimate of patriotic self-satisfaction - but many will have nodded in agreement. There's little to be proud of in Guantanamo Bay, in rendition flights, in the response to Hurricane Katrina and the underbelly of racism and misery that it exposed, in capital punishment. If nothing else, President Obama will look different. And if he's even a tenth as successful at charming the rest of the world - even cynical old Europe - as he has been at courting millions of Americans, then his hot air may yet dispell the chill that has descended on international relations. It'll be global warming, but in a good way.


And what of John McCain? His campaign has moved today to deny allegedly damaging claims that he has been intimate with glamorous Washington lobbyist Vicki Iseman. According to the story in the New York Times,

In 1999 she began showing up so frequently in his offices and at campaign events that staff members took notice. One recalled asking, "Why is she always around?"

That February, Mr. McCain and Ms. Iseman attended a small fund-raising dinner with several clients at the Miami-area home of a cruise-line executive and then flew back to Washington along with a campaign aide on the corporate jet of one of her clients, Paxson Communications. By then, according to two former McCain associates, some of the senator's advisers had grown so concerned that the relationship had become romantic that they took steps to intervene.

A former campaign adviser described being instructed to keep Ms. Iseman away from the senator at public events, while a Senate aide recalled plans to limit Ms. Iseman's access to his offices.

McCain's aides have, it is said, been trying to suppress this story for weeks, fearing a romantic entanglement will be a major, perhaps fatal, blow to his candidacy.

I wonder. The odd sex scandal didn't do Bill Clinton's electoral prospects much harm in 1992, after all. And McCain, for all his hero status, looks his age. A bit of mild naughtiness, a hint here and there that his virility is still intact - even the fact that the reputed liaison, even if untrue, is at least plausible - could be just what he needs. And Ms Iseman is both beautiful and classy, as well as young enough, at 40, to be his daughter.

I'm reminded of the occasion when the septuagenarian Prime Minister Lord Palmerston was reputed to have fathered an illegitimate child. Opposition leader Disraeli decided not to exploit the situation. "If this news gets out, he'll sweep the country," he is said to have warned.
Email Post
Labels: Obama US election