Today is Shrove Tuesday in the liturgical calendar. Traditionally, that meant carnivals, riotous and anarchic games of traditional football, a big piss-up before the privations of Lent. People in Britain don't go in much for fasting these days, though, or religion for that matter. So instead church leaders are urging people to give up lightbulbs. 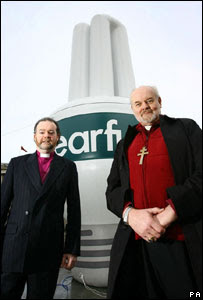 Launching their call for a "Carbon fast" in Trafalgar Square today, next to a giant energy-saving lightbulb, were two of Anglicanism's biggest media tarts. No, not Nazir-Ali: I expect he's still in hiding after his recent remarks about you-know-who. Instead, Bishop of Liverpool Jim Jones, a man who'll do anything to get his face on the telly, and London's Richard Chartres, famous for having the biggest ego in the Church of England, joined forces to promote a "forty-day journey through Lent, towards a lighter carbon-footprint". They want people to carry out symbolic acts of environmental friendliness: stop using plastic bags, buy draught excluders. They also recommend removing a lightbulb from a prominent place in the home "as a constant visual reminder".

Fairly uncontroversial stuff, perhaps. But it set me thinking about the relationship between religion and the environment.

Environmentalism pushes many of the same buttons that religion does. It inculcates, and trades on, a sense of sin; it sets up a morality; it doesn't like too many questions. While it affects to be based squarely on science, dissenting (or sometimes merely inconvenient) scientific opinions are ruthlessly suppressed. The word "heretic" is used, only half-jokingly, of scientists or others who deviate too far from the agreed line.

Like religion, environmentalism has a grand interpretation of history, and an eschatology. Until fairly recently, many Evangelicals were rather suspicious of its quasi-pagan aspects, its honouring of the earth almost as a divine being (worse, a goddess); while some environmentalists returned the compliment by pointing to passages in the Bible giving man "dominion" over nature. Yet in many ways the narrative adopted by the green movement owes much to Judeo-Christian mythology.

In the beginning, the story goes, there was an unspoiled paradise. Early humans, like "primitive" tribes of hunter-gatherers today, lived in prelapsarian harmony with their environment. But then Man acted to subdue nature, polluting the environment. We are fallen. Our only hope lies in repentence.

Yet environmentalism also, like religion, offers comforts and hope. Salvation is on offer, if you only confess your sins, change your ways and reorder your life along environmental lines: the world can be saved. It is future-orientated. Religion offers hope that one's life will continue after death: environmentalism, less selfishly, holds out the prospect of a cleaner, more sustainable world for your grandchildren. But to attain salvation requires sacrifice. Here it chimes well with the penitential morality of Lent.

I wonder, though, who is using whom. Religious leaders yearn to be taken seriously, want to "reach out" beyond their shrinking congregations, and still flatter themselves that they can deliver the numbers. Just as Catholic bishops threaten pro-choice politicians with the loss of Catholic votes at elections, so these Anglicans imagine that the faithful will dutifully turn off their lights. Yet they know, even as they say it, that their words carry far less weight than once they did. No-one takes much notice of their pronouncements about sex, for example. Unlike radical Muslims they can't generate easy press attention by finding something to riot about. Perhaps the good bishops think that promoting low carbon emissions is a sure-fire way of being listened to. They're pushing at an open door, after all.