Labour and the lager louts 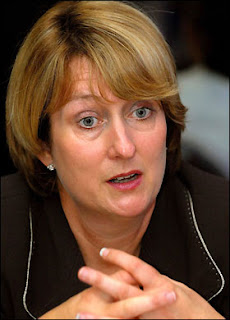 While Jack Straw seems to be winning his turf war with Home Secretary Jacqui Smith over the really important issues, such as the propensity of the police and the security services to bug MPs, she's back to doing what she does best: trying to attract headlines by trotting out fatuous and ill-considered policies. And, as usual, the media are keen to swallow her incoherent tripe as evidence of the government "getting tough" on serious social problems.

Like teenage drinking. Or, to be more precise (for this is an area in which precision is vital) young teenagers drinking large quantities of alcohol, vomiting in the streets, getting admitted to hospital, and wrecking their livers.

We're not talking about them having a small glass of champagne at a wedding reception, are we? Or are we? With this censorious, rule-obsessed, unimaginative bunch of spoil-sports, it can be hard to tell.

In a speech at the Home office today, Ms Smith managed simultaneously to trumpet the success of a recent police crackdown on teenagers swigging cans of lager in public places, and call for new laws to allow them to do the very thing they have been doing anyway.

On the one hand, she admits that young people are, on average, drinking less than they did. On the other hand, she claims that underage drinking is a growing problem. And not just because of a small hard core, either. On the contrary,

We've now reached a worrying tipping-point where more 13 year olds have drunk alcohol than have not. That's clearly a cause for concern.

Clearly? How so? Surely it depends on how often they are drinking, under what circumstances, and why. The Heresiarch certainly drank alcohol on many occasions before the age of thirteen, on appropriate family occasions and without getting drunk. Did Jacqui Smith? No-one asked her, but I suspect the answer is probably Yes.

Can she really not see the difference between a thirteen year-old who has tried alcohol, and a thirteen year old who is an effective alcoholic? I find the notion of a home secretary with such a simplistic, indeed moronic, view of society and human relationships far more alarming than a few pissed teenagers.

Smith then announced a new crackdown on teenagers drinking this forthcoming half-term holiday. Under longstanding laws, the police have the power to seize alcohol from teenagers who are drinking it, or who the police believe are likely to start drinking it. Most people would consider this more than enough power do tackle rowdiness and problem drinking. Not our Jacqui. She wants police to

have discretion when it comes to confiscation and not be prevented from doing so by having to prove that they have reasonable suspicion that the children are about to consume the alcohol that they've got.

Which makes me wonder what circumstances there could possibly be under which the police would not have such a suspicion.

Something along these lines, perhaps:

"What's that you're carrying, young man?"

"It's a present for my grandmother. As you can see, it's done up with wrapping paper and has a label on it saying quite clearly, Happy Birthday Gran"

"It looks like a bottle of whisky to me"

"Yes, it's an expensive single malt. Her favourite tipple."

"Who sold you that?"

"My mum bought it. I paid for it with my pocket money."

Apart from depriving grandmothers of their birthday presents, it's hard to think how Jacqui's proposed new law would be of any use. But of course, that's not the point. Smith knows that the police don't need any new powers, but, as usual, passing a new law will "send a message". It will, as she says, make it "crystal clear that we do not want to see children drinking in public."

As David Davis, who's on something of a roll, put it,

The powers to confiscate alcohol from under-age drinkers on the street were proposed and passed under the last Conservative government, but ministers have no idea how effective the existing law is because they haven't the faintest idea how often it has been used.

If the home secretary spent as much time enforcing the laws we have, as she does on media strategy, we might finally start to tackle binge-drinking on our streets and the violence that goes with it.

Of course there's a problem. But the solution does not lie with alcohol, but with the society that we have become in the last few years.

In lamenting Britain's propensity to drunkenness and binge-drinking, it's traditional to point to France, where (we're told) children are introduced to alcohol, sensibly, within the family. But there are many British families which behave like this, too. Such a strategy is no more likely than total prohibition to prevent binge-drinking, which is an epidemic with far deeper roots. It's about many things, which include the breakdown in discipline and in communities, the lengthening of adolescence and the increased stigmatising (indeed criminalising) of the young.

When social networks were stronger and more intuitive, and less mediated by the state, a little licensed hell-raising was accepted, even encouraged, among the young. It used to be a lot easier for under 18s to get served in pubs. The requirement for photo-ID is a relatively new, draconian and illiberal response, not to increased under-age drinking per se, but rather one that reflects the bureaucratisation and regimentation of society, and, more particularly, the imposition of penalties on retailers. Ignorance always used to be a defence: it was only impermissible for a publican or off-licence owner to sell alcohol to a young person who was obviously under age, or who was known to be so. In practice, blind eyes were often turned. Society didn't collapse as a result.

What we are dealing with in this moral panic, of course, is less alcohol itself than alcohol as a manifestation of wider social concerns. As James Davidson put it in his invaluable study of the ancient Athenians, Courtesans and Fishcakes, summing up the prevailing official attitude towards drinking,

The broad range of intoxicating liquors known to man are viewed as manifestations of a single drug, alcohol, in various disguises. The wide experience of enjoying these beverages and the manifold forms of consuming them are viewed as manifestations of a monotonous pathology of intoxication and addiction, as ethyl first ensnares and then takes over the body.

The very illegality of alcohol to under-18s is part of its mystique. And the more difficult it has become for under-18s to buy alcohol, the more public carousing, the more health-problems, the more anti-social behaviour there has been. This should be enough to demonstrate that attempting to enforce the law is no solution. If under-18s could be relied upon to drink sensibly, within lower limits than are attached to adults, then there would be less problem. Personally, I would lower the age limit to something more realistic, 16 say, or even abolish it entirely. We allow 16 year olds to have sex, an activity that can lead to far more serious long-term consequences than a couple of pints of lager. Let them drink in the relatively controlled conditions of clubs and pubs, rather than out on the streets where they cause trouble and endanger themselves.

Of course, the adult attitude towards teenage drinking, like the adult attitude towards teenage sex and teenage fearless self-endangerment (otherwise known as "irresponsible behaviour") is influenced by several different factors, among which are nostalgia, jealousy and fear of one's own mortality. Once one has reached the age at which such behaviour seems dangerous, and destructive of society, one is, almost by definition, no longer having fun. In the case of some politicians, it may be wondered if they ever did. (On the other hand, while he cannot speak for Ms Smith, the Heresiarch has clear memories of certain persons now prominent in politics having a very good time indeed.)

But if you want to answer the question, why are children getting blotto and embarking upon a spiral of degeneracy, criminality and vice, looking at access to alcohol is the wrong place to start. It's not the cause, it's the symptom.

Stop scaremongering about alcohol, I say. Start celebrating it instead. Encourage responsible drinking, not with New Labourish neo-puritanism, but with a recognition of its immense contribution to civilisation.

Let us echo Euripides, a man who knew a thing or two about the dangers of inebriation yet was able to put the following beautiful speech into the mouth of Teiresias (from the Bacchae)

The blessing that Dionysus, Semele's son, procured
and gave to man is counterpart to that of bread:
the clear juice of the grape. When mortals drink their fill
of wine, the sufferings of our unhappy race
are banished, each day's troubles lost in sleep.
There is no other cure for sorrow. Dionysus,
himself a god, is thus poured out in offering
to the gods, so that through him come blessings on mankind.