A Touch of Harry

Behold, as may unworthiness define
A little touch of Harry in the night
And so our scene must to the battle fly


On his admirably candid BBC editors' blog today, Jon Williams stressed the voluntary nature of the agreement that kept secret Prince Harry's tour of duty in Afghanistan. "Any of the organisations could have decided to leave at any time," he writes, and states his surprise that the agreement lasted so long. And indeed, it is somewhat surprising, especially given the emergence of the story in Australia and the more circumspect Internet rumours that were flying around in the middle of January. Williams also claims that,

Until yesterday, only a handful of people in the BBC knew about the story - trust me, keeping secrets from other journalists is hard work!

Is it, though?. Journalists these days, as Nick Davies demonstrates in his must-read Flat Earth News, can be a lazy and surprisingly incurious lot, happy to be spoon-fed press releases and happy stooges for scare stories planted by intelligence agencies. If they didn't know about Harry's deployment, it's because they didn't want to know, or simply didn't care. It was never a secret. The truth was always out there. Not telling the story was in no sense a dereliction of duty.

What came next, however, undoubtedly was.

There was no real context, no proper analysis of what we were doing there and why, and little acknowledgement that there was anyone in Afghanistan who was not a terrorist. Repeatedly we were urged to feel pride and vicarious glee at Harry's (I don't deny it) courageous determination to get to the front line, to be in the thick of the action. But pride in a young man's bravery brings with it (how can it not?) complicity in what is being done in our name. All the more reason for a proper account of the real situation in Helmand province. We got none.

Meanwhile, the unfolding disaster, increasingly costly in terms of both lives and resources, less and less successful even in containing the Taliban (let alone rebuilding the country, which was supposed to be the whole point) continues apace. The Guardian today reported the findings of US intelligence chief Mike McConnell, that the Afghan government controlled barely 30% of the territory. Foreign forces, once welcomed as liberators, are increasingly resented and despised. The Taliban come and go, then come again. Most of the country remains under the control of warlords, or atavistic tribal leaders. Women are still prisoners. Poverty and ignorance reign. This is a country regressing determinedly to the middle ages.

In a tear-jerking moment, the prince told his interviewers of a letter he had received from his brother, in which William told him how proud their mother would have been. Harry added:

Hopefully, she would be proud. She would be looking down, having a giggle about the stupid things that I have been doing like going left when I should have gone right.

Proud of her son, no doubt. But would Diana the peace campaigner, who resigned her honorary commissions towards the end of her royal carreer, who was described, somewhat unfortunately, as a "loose cannon" by a Conservative politician after campaigning against landmines, really be full of glee to see him blasting away at a bunch of foreigners? I wonder. 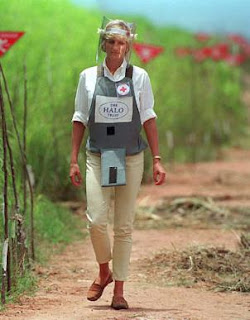 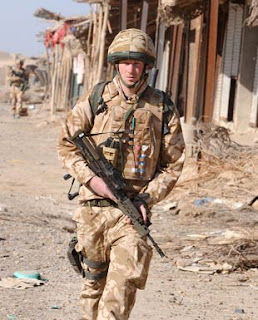 Whether or not his mother would have been proud, his country undoubtedly is. It's Henry V all over again: young prince puts his debauched, party-going ways behind him and becomes a man in the great proving-ground of war. Even the name's right. And, of course, it's so much more respectable to be taking a shot at "Terry Taliban" than boozing in a nightclub or feeling up some random blonde. Harry is, of course, an entirely unexceptional young army officer. Any of his colleagues could have told much the same story. But because he is a Royal - OK, let's be more modern, a celebrity - we're meant to identify with him, to feel patriotic on his behalf. Prince Andrew, tellingly, didn't get this sort of treatment at the time of the Falklands War - he was just one naval helicopter pilot among others. A better parallel, though a less action-packed one, might be with Elvis Presley's brief time in the US army at the end of the 1950s.

The media sealed a Faustian pact when it agreed to keep quiet about Harry's whereabouts in exchange for exclusive "access". Because what seems like (an undoubtedly is) a to-die-for scoop (even if it is a scoop shared with many other broadcasters and newspapers) actually turned out to be pure, unadulterated propaganda. That every major news organisation showed itself willing to produce such pap is, at one level, a sad comment on contemporary news values. But it was also astute. Royals are always a big pull. War, especially gung-ho, explosive war, makes for striking visuals. Royals at war equals guaranteed ratings, sales and kudos.

The media were bribed. But it was no quid pro quo. The Ministry of Defence stood only to gain from the arrangement.

And the media hard-sell carries with it immense dangers, if not domestically, then certainly in the wider world. It's particularly bad news for the BBC, who claim to be an impartial, objective news organisation, who claim reliability, who pride themselves on being taken seriously all over the world. They now stand revealed, if not exactly a mouthpiece for the British government, then at the very least as implicated in the British war machine, doing the bidding of the generals, taking the Queen's shilling. Will they ever be trusted internationally again? Can they any longer claim to be different from the likes of Fox News?

This isn't merely a matter of prestige. By a strange coincidence, the BBC's initial meeting with army chief Sir Richard Dannatt, on which the terms of the deal were thrashed out, took place on the same day that Alan Johnston was released from captivity in Gaza. His safety, and that of other reporters in dangerous locations, is to a large extent dependent on the corporation's reputation for even-handedness and honesty. This outbreak of pro-war cheerleading will hardly help.
Email Post
Labels: Afghanistan BBC journalism Prince Harry

Anonymous said…
You're probably right about the propaganda. But have you seen that video of the American soldier throwing a dog down a cliff in Afghanistan? That'll undo most of the Harry factor, I think.
5 March 2008 at 08:09