Next week, perhaps, just maybe, the maverick Dutch politician Geert Wilders will release his long-awaited, much condemned film attacking Islam and the Koran. Alternatively, he'll announce yet another postponement. Who knows? At the moment, it's just an image on a website. "Coming soon".

In many respects the actual content of the film Fitna (if, indeed, there is such a film, and it isn't all an elaborate wind-up) is less important than the idea of the film. After all, what can it say? That the Koran contains statements that can be construed as misogynistic, anti-modern, or inciting of violence against unbelievers? Such things have been said many times, not least by Wilders himself, who last year compared the Islamic holy book to Mein Kampf and called for it to be banned.

What Wilders is engaged in, of course, is a stunt, a piece of deliberate provocation. One might almost say, a piece of political theatre. And for it to succeed, no-one actually has to see the film. There doesn't even need to be a film, merely the threat of a film, the idea of an artwork, or a political statement, so calumnous in its intention or effect that it creates havoc. In other words, Wilders isn't bravely setting his face against censorship and intimidation. He wants the censorship and intimidation. Because the censorship and the intimidation are the whole point. The actual content of the film is actually pretty irrelevant. 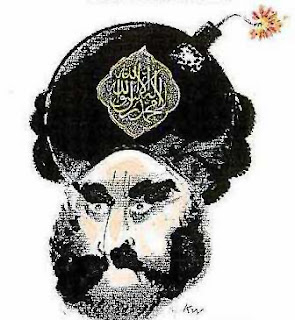 By that token, Wilders has surely succeeded, more than he could ever have hoped. Salman Rushdie had actually to write the Satanic Verses, and have it published, before the Ayatollah Khomeini could be prevailed upon to issue his fatwa. The Danish newspapers had to publish the cartoons (the most iconic of which, by Kurt Westegaard, I fearlessly reproduce on the left). Theo Van Gogh, Wilders' more honourable compatriot, had to broadcast the film that cost him his life. All Wilders had to do was announce that he was making a film and then sit back and watch.

Dutch broadcasters, initially looking to broadcast the film, have shied away. A press screening was announced, and then cancelled for "security reasons". The Dutch justice ministry raised the country's terrorist threat assessment, apparently all because of Fitna. Unrelated Dutch films were threatened with disqualification from a film festival in Cairo. Syria's Grand Mufti, in the European parliament, accused Wilders of "inciting wars and bloodshed". In Afghanistan Dutch troops came under increased pressure from the Taliban, who announced their intention to "exploit widespread disquiet among the Afghan population about the film". The 56 members of the Islamic Conference, meeting in Senegal, anathematised Wilders with all the solemnity of an ecumenical council of the early church, or of a communist party presidium.

Nor is it only Islamic governments who have attacked Wilders and his supposed film. The Dutch cabinet blasted the production as long ago as November. After a meeting with government ministers, Wilders complained of "an hour of intimidation". The Dutch prime minister, meeting French president Sarkozy, issued a joint statement regretting the film, while his Danish counterpart has "strongly condemned" what he termed Wilders' "grossly offensive" comments about Islam. So if part of Wilders' plan was to point up the timorousness of western governments in defence of free speech and against the designs of Islamic supremacists, then he would appear to have succeeded.

Just as the rioters against the Danish cartoons couldn't appreciate the irony that their violence made the illustrators' point for them, so both Islamist reactionaries and Western liberals are playing Wilders' game, dancing to his rather tired tune.

Fitna means "discord", by the way. The same as Eris, the Greek "bad fairy" who started the Trojan war by lobbing a golden apple at the feet of the goddesses of sex, war and money. How appropriate.


In the meantime, a more serious attempt to muzzle free speech has perhaps, fallen into a deliciously ironic bunker.

For several years now, several Muslim countries have been attempting to make blasphemy, or something like it, an international crime. Their argument, which has been adopted by the UN Human Rights commission and, last December, in a resolution at the General Assembly, has been that religious beliefs are uniquely deserving of respect and protection. They even managed to insert the following into the resolution:

"The General Assembly stresses the need to effectively combat defamation of all religions and incitement to religious hatred, against Islam and Muslims in particular."

The other week, a report on "Islamophobia" was adopted by the Islamic Conference. In a remarkable example of institutionalised hypersensitivity, the report's authors traced the history of "Islamophobia" which, they stressed, may only have been named in 1996 but has actually been around since the very earliest times. People who opposed Mohammed's conquest of Arabia were Islamophobes. "Barely a few years after the advent of Islam, Christian Byzantine and Greek monks, and the Church establishment launched an intractable campaign of slanders and denigration against Islam, depicting it as a mere apostasy and a sort of barbaric paganism". Then came the Crusaders, who inexplicably objected to the Islamic occupation of formerly Christian Palestine. A further wave of Islamophobia, we are told, began with the age of discovery, after which

Muslim populations from the confines of Indonesia to the shores of the Eastern Atlantic were subjugated to the brutal rule of the “colonial masters”, who claimed that their aim was to “civilize” the conquered nations. Under such rule, Muslims suffered depredation, foreign occupation, exploitation, and, subsequently, massacres and ethnic cleansing.

But that was as nothing compared with the situation today, what with the Motoons, and Geert Wilders, and all the rest of it:

In recent years, the phenomenon has assumed alarming proportions and has indeed become a major cause of concern for the Muslim world. Defamation of Islam and racial intolerance of Muslims in the western societies are on the rise. The proponents of Islamophobia, who for whatever reasons are either prejudiced or hold a negative view against Islam and Muslims, are active in defaming Islam. ...

As a result of the rising trend of Islamophobia, Muslims in different parts of the world, in the West in particular, are being stereotyped, profiled and subjected to different forms of discriminatory treatment. The most sacred symbols of Islam, in particular the sacred image of the Prophet Muhammad (PBUH) is being defiled and denigrated in the most insulting, offensive and contemptuous manner to incite hatred and unrest in society.

There is therefore, the report concludes, an

urgent need for the international community to come up with a binding legal instrument to fight the menace of Islamophobia. The Report has underscored that the right to freedom of expression should be carried out with responsibilities and cannot be a license to cause hurt, insults, provoke and incite hatred among religions by defaming, denigrating and insulting the sacred religious symbols of Islam and causing unrest and violence in societies.

The fact that Islamic countries can get so worked up about a few cartoons while Christian archbishops are being murdered in Iraq, when the government of fairly liberal Qatar will only permit a church if it's stuck out in the desert and doesn't bear a cross, and Christian communities from Pakistan to Egypt come under increasing persecution shows, I think, a truly warped sense of priorities.

But, oh joy, the OIC's cunning plan of enshrining special protection for Islam by enforcing an international ban on the defaming all religions has hit a serious buffer in, of all places, Saudi Arabia. The Shoura Council, which is the nearest thing the kingdom has to a parliament (which is to say, it's hand-picked by the king and has no power whatever) this week rejected a resolution calling for international action to protect religious sensibilities. Why? Because the proposed laws wouldn't just protect Muslims. As one Shoura member, Khaleel al-Khaleel explained, it would create a dangerous precedent. "Some consider Buddhism, Qadianism and Baha’ism as religions," he warned. "Can we make it obligatory for Muslims to respect these faiths and avoid criticising them?"

(Qadianism, by the way, is the orthodox term for the Ahmadiya sect of Islam, which mainstream Sunnis regard as heretical.)

Another critic of the move, Talal Bakri, feared that it was all a trap: "If we approve the resolution it will be make it obligatory to recognise some religions and will facilitate establishing places of worship for them in Muslim countries."

Impeccable logic. What the Islamic leaders really want to see, of course, is an international agreement that while Islam is off-limits and beyond criticism in non-Islamic countries, Muslim countries can carry on repressing, persecuting and discriminating against non-Muslims as much as they like. And if you see anything wrong with that, you're an Islamophobe.
Email Post
Labels: Fitna free speech Geert Wilders Islam Islamophobia multiculturalism religion

Anonymous said…
Once again, an excellent article. I too am deeply unsurprised that the Shoura Council rejected the resolution.

How could they possibly claim persecution overseas if they were forced to operate under the same obligations as the countries they claim are persecuting them? And that sentence worked better in my head.