One of the day's best stories has to be the Times's report of the new pecking-order of nations, drawn up by military experts Jane's, which ranks countries in order of security, peacefulness and, by implication, prosperity. It was called the "Country Risk Survey". As we all know, risk is a Very Bad Thing indeed.

That Britain featured very near the top (7th) is perhaps a sign that the survey was somewhat limited in its scope. It was beaten by Sweden, Ireland, and some of those peculiar little principalities that survived the rationalising movements of the nineteenth century: Lichtenstein, Monaco, San Marino and the like. Though the UK was, amazingly, ranked higher than Andorra.

And the winner was...

An absolute monarchy, run along theocratic principles, whose rulers base their claims for legitimacy on the custodianship of some ancient shrines. All the top jobs are held by men: indeed, women are excluded by a matter of principle from all but the most junior positions. It is notorious for its sexual repression and its reactionary religious dogmas, which, via an international network, it has managed to impose throughout the world.

I speak, of course, of the Vatican. 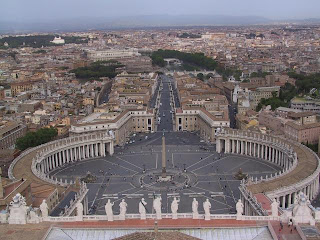 That a "country" which consists of a few dozen acres of office space and a couple of decent museums should feature in the survey at all seems a little strange. But then it does, as the report's authors point out, have a number of things going for it. There's a low crime-rate. No national debt (no need to render unto Caesar, after all, when thou art Caesar). And, above all, political stability. You'd think, though, that there might be some sort of terrorist risk associated with the place, especially given Ratzinger's recent very creditable decision to baptise a former Muslim in a lavish ceremony at St Peter's. Apparently not. Britain also scored quite low on the terrorism scale, incidentally, something that I don't expect to hear the government shouting about. They like us to be scared, if only so that they can keep passing repressive new laws.

It was not ever thus. There was a time, say the early 16th century, when the Vatican had about as unstable a government as it was possible to get: murders, plots, sexual intrigues, the lot. But that was then: these days, one octogenarian succeeds another in a couple of puffs of smoke. Almost like that other very stable country which takes its religion very seriously.

No wonder they've been getting on so well lately.
Email Post
Labels: catholicism religion security