The release of Geert Wilders' anti-Koran film has produced a vast amount of talk, but very little in the way of usuable film footage. Which may account for the relatively low level of TV coverage of the affair, certainly when compared with the huge media swarm that was the Danish Cartoons.

So far, most of the going has been made by officialdom. Iran made a formal protest to the Slovenian ambassador (as representing the EU). Despite the fact that the Slovenians had already condemned the film in terms which even the appeasement-minded Dutch government found a little too strong. The secretary general of the 57-nation Islamic Conference (whose name I can neither pronounce nor type) called the film "a deliberate act of discrimination against Muslims" which would cause "insult to the sentiments of more than 1.3 billion Muslims in the world." As though he had asked them. Even Australia's foreign minister Stephen Smith, for some reason, took time out of his busy schedule to condemn Wilders, calling his production "an obvious attempt to generate discord between faith communities".

Most of the world's Muslims, however, seem to have had other things to concern themselves with. Or perhaps they were too busy celebrating the news that they now outnumber Roman Catholics to give Fitna a moment's thought.

Finally, though, after three days during which Fitna was distributed across the Web, was withdrawn by its original distributor and swiftly re-emerged, like some unkillable vampire, on Google Video, YouTube and a thousand obscure file-sharers, a small but photogenic demo has taken place in Indonesia. 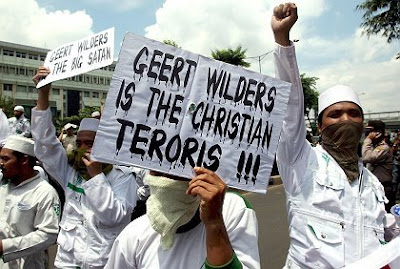 With more than 200 million Muslims, and the enormous international opprobrium that Wilders' efforts has attracted, it shouldn't be too difficult to round up a bunch of enragés to urge death on the blasphemer. So perhaps we should rejoice that a group calling itself the Islamic Defenders Front only managed to find 40 people to stand outside the Dutch embassy in Jakarta. Members of the party "threw a few empty plastic bottles and a couple of eggs at the compound" before dispersing.

Soleh Mahmud, one of the organisers, admitted that he hadn't seen the film. But he was sure, nevertheless, that it was "a great insult to Muslims". After all, that's what everyone has been saying, isn't it? "The Dutch government must arrest Wilders", he demanded. And then, perhaps thinking that didn't have quite the required force (or perhaps the reporter pressed him) added, that "Wilders must be killed because he has declared war on Muslims."

Is that the best they can do? Where's Rage Boy when you need him?

A few months ago, when the Grand Mufti of Syria addressed the European Parliament, he lamented, in the manner of an old-style gangster what a terrible shame it would be if anything unpleasant happened. "If there is unrest, bloodshed and violence after the broadcast of the Koran film, Wilders will be responsible," he warned. Rather than, say, those responsible for the unrest, bloodshed and violence.

There were large protests in Afghanistan prior to Fitna's release, involving hundreds of demonstrators. Dutch forces announced plans to increase security. The country's ambassador in Malaysia predicted "dozens of deaths" if the response of the world's Muslims followed the now-traditional pattern. Politicians and diplomats outdid each other in prognostications of doom. It was almost like talking up some cup final or heavyweight title fight. Doubless some of the world's press were looking forward to the trouble, in the way they kinda sorta look forward to wars. So far they have been disappointed.

Indifference, of course, is the last thing Geert Wilders wants. He was at it again today, telling Der Spiegel that Islam was "an ideology [that] endangers our values. I hate it." Moderate Islam, he claimed, was "a contradiction". Judging by their desperate calls for calm, expressed in a language most likely to provoke riots, leaders on both sides of the imagined civilisational divide share his scepticism: a "moderate Muslim", in the official lexicon, is one who, while mortally offended by Wilders and his film, nevertheless refrains from strapping a bomb to his or her waist and wandering into a crowded shopping centre. Why else would they be running scared of an imagined mob?

Could it be that the Danish Cartoon crisis marked the high water-mark of Islamic anger? That even as Western political leaders try to head off worldwide protests by compromising the long-cherished principle of free speech, and Muslim leaders attempt to bully, blackmail and bribe the UN into declaring criticism of Islam a human rights violation, the mass of ordinary mosque-goers from Kuala Lumpur to Morocco have simply lost interest? The politics of offence is both limited and limiting. It does nothing to address the very real problems of Muslim countries: the corruption, the poverty, the bad governance and lack of democracy, the genuine human rights violation, the lack of technological innovation or the oppression of women. It's not really relevant. At most it's a side-issue, providing a brief emotional relief for those involved. And it's been done so many times before. Who cares?
Email Post
Labels: Fitna free speech Geert Wilders Islam religion