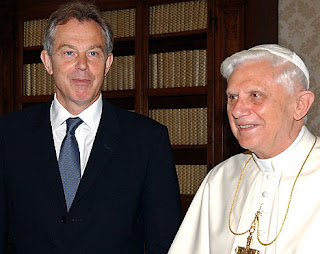 Alongside his arduous responsibilities at JP Morgan and Zurich financial services, not to mention his lecture tours, his not-quite campaign for the presidency of Europe, his memoirs and whatever it is he is supposed to be doing in the Middle East, Tony Blair is, we hear, going to find time to lecture American students about religion. Yale University, it was announced yesterday, is appointing him to the Howland Fellowship, a post previously occupied by such incongruous figures as Ralph Vaughan Williams and Indira Ghandi.

"The Deans of the Yale School of Management and Divinity are working with Mr. Blair on finalizing details of the program," said the Yale statement. I like that: management and divinity. Religion as a branch of the corporate governance industry. Very Blairite.

The appointment of Mr. Blair provides a tremendous opportunity for our students and our community. As the world continues to become increasingly inter-dependent, it is essential that we explore how religious values can be channelled toward reconciliation rather than polarization. Mr. Blair has demonstrated outstanding leadership in these areas and is especially qualified to bring his perspective to bear. We are honored that he is planning to join the Yale community.

He's clearly not in it for the money. The Daily Mail speculates that he will be earning £100,000 plus expenses for leading a seminar and participating in "a number of events around the campus". Which might all be lunches, of course. Mind you, that's small change for the increasingly rolling-in-it ex PM, who can earn almost as much for a single speech to his American admirers.

Perhaps he just wants to be close to his son Euan, currently pursuing a masters degree in international relations at Yale. By all accounts, it's a course with no great academic reputation (Yale being comfortably the least intellectual of the Ivy League universities), but unlike Harvard or Princeton the authorities at New Haven, Connecticut were happy to offer a generous scholarship in exchange for netting a prestigious recruit. I don't think the dons at University College Oxford had to bribe Chelsea.

Tony's stint at Yale will coincide with the launch of his pet project, the "Blair Faith Foundation", which will aim to bridge the divides between Christians, Muslims and Jews. This has long been one of Blair's obsessions. "He sees this as where the action is and nobody else is really doing it," a source told The Times last year. Ever since 9/11 he has been lecturing Muslims about the "true faith of Islam" which has, he thinks, been twisted by fanatics, fundamentalists, terrorists and corrupt dictatorships. This was him last year, in an essay for the Council on Foreign Relations:

The roots of the current wave of global terrorism and extremism are deep. They reach down through decades of alienation, victimhood, and political oppression in the Arab and Muslim world.

Would that "political oppression" include places like Saudi Arabia, I wonder, whose rulers Blair broke international fraud conventions to protect from embarrassment over their squalid arms deals?

In the same speech, Blair launched into a paean of praise for the Koran, which many will find rather selective, if not utterly perverse:

To me, the most remarkable thing about the Koran is how progressive it is. I write with great humility as a member of another faith. As an outsider, the Koran strikes me as a reforming book, trying to return Judaism and Christianity to their origins, much as reformers attempted to do with the Christian church centuries later.

Really? The Koran denies the divinity of Jesus, and claims that he wasn't even crucified. I doubt Luther and Calvin would have had much sympathy with that.

The Koran is inclusive. It extols science and knowledge and abhors superstition. It is practical and far ahead of its time in attitudes toward marriage, women, and governance. Under its guidance, the spread of Islam and its dominance over previously Christian or pagan lands were breathtaking.

That may have owed something to the success of Islamic military campaigns, I suppose. But then again, Blair is entitled to his admiration for military achievement, having presided over the ongoing disaster of Iraq.

If he thinks Islam is so wonderful, one may perhaps wonder why he turned last year to Roman Catholicism. As Ajmal Masroor put it, "Why would Blair turn to the older versions of God's testament when there is the Quran?"

Still, no-one would deny that religion is very important to Tony Blair. In government, he promoted faith schools and "faith-based" initiatives. There were schemes like the Faith Community Liaison Group, which was billed as a "high-powered ministerial grouping will have an input across government" and deliver "a blow to secularism". It vanished, happily, without trace. When questioned on his decision to invade Iraq, Blair notoriously replied that he would be judged by God. Rather than by the voters, presumably. And he recently complained about the poor level of religious discourse in British public life, where politicians who go on about God (Ian Paisley springs to mind, or Ann Widdecombe) are apt to be written off as "nutters".

Yet British political leaders are increasingly nodding their heads towards the orthodoxy that religion is becoming more important, not just internationally, but at home too. David Cameron, in his otherwise excellent speech, bought into this nonsense, claiming that "contrary to popular belief, Britain is actually becoming a more religious country". There's no evidence for that. Attendance at Catholic churches may have been swelled temporarily by the vast wave of Polish immigration, but that's a statistic about Poles, not about Britain. Among native Brits, church attendance continues to decline, which is the real reason, for all the surface chatter about gay priests, why the Church of England is in such deep manure.

What, though, of the Blair Foundation? It sounds like a noble project, but it's hard to see the point of it, unless it be to promote Our Tony as some sort UN Secretary General-type figure for religion. The idea that all the problems in the world can be sorted by getting a group of old men in robes and (often) beards to sit around and swap platitudes is both absurd in theory and over-implemented in practice. It was, of course, the main point behind the bizarre letter sent last year by a miscellaneous assortment of Muslim religious scholars to the world's top Christians, a missive most memorable for its exotic enumeration of Orthodox patriarchs. We learned last week, in fact, that plans are being set in place for a major Catholic-Muslim summit later this year. Quite how they managed to arrange this without the good offices of Tony Blair is, presumably, a mystery known only to God.

Apart from anything else, and despite his many pro-Muslim pronouncements, Tony Blair is scarcely a man trusted by ordinary Muslims internationally. That's hardly the point, though. This is about rebranding Blair, God-botherer in Chief and Man of Destiny. And I hope the Faith Foundation gives him plenty to do in the coming years. Anything to keep him away from Brussels.
Email Post
Labels: Blair Politics religion