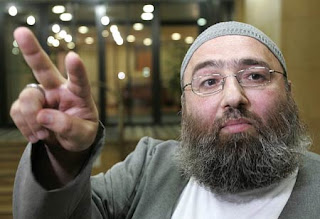 Not all Muslims are up in arms about Fitna, the compilation of video-clips that UN Secretary-general Ban Ki-Moon absurdly described, in language that suggested he was entirely unfamiliar with its contents, as hate-speech.

"Muslim reaction to Dutch film is muted" reports the FT. One of those unscandalised turns out to be none other than Sheikh Omar Bakri Mohammed, for long the British press's second favourite mad mullah (after the hook guy). Now based in Libya after being thrown out of Britain, he was asked if he personally was offended by it.

"On the contrary," he replied. "If we leave out the first images and the sound of the page being torn, it could be a film by the Mujahideen".

How true. Almost all the inflammatory material in the film came from extremist preachers mouthing sentiments with which Bakri no doubt heartily agreed. He may even believe that some young Muslims will listen to the messages of hatred for the west and be inspired to join Al Qaeda. Mind you, in comparison with many jihadist videos out there on the Interweb, Geert Wilders' effort contained far less violence.

Bakri may be an absurd, posturing, self-important, rabble-rousing apologist for terrorism. But compared with the shameful equivocation of most western leaders his honesty is almost refreshing.
Email Post
Labels: Fitna free speech Islamism