Reports that the newly-sane Britney has given Brummie paparazzo loverboy his marching orders will, no doubt, thrill her many admirers. Well, most of them. And, of course, this latest bust-up may not, in fact, be the end of the affair. Perez Hilton, out of the loop for once (he had to rely on the Sun!) is withholding judgement. Only when Adnan Ghalib's multi-million-dollar (he hopes) kiss-and-tell appears on a newsstand near you will we know for definite. But this isn't a gossip site, so I won't speculate further. It's a particular detail of the latest episode in the soap opera that is Ms Spears' life that I wish to focus on. 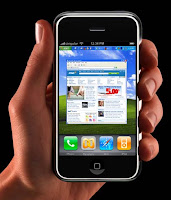 Britney had, it seems, discovered a series of compromising text messages on Adnan's iPhone, sent by waitress (this is LA, so perhaps we should be generous and say "aspiring actress") Amanda Pagel, in whose company he had recently been snapped by one or more of his colleagues. After confronting him with the evidence, as they say in the trade, she denounced him for a scoundrel and threw his precious iPhone in the swimming pool.

"He didn’t even bother trying to get it out of the water" said the "insider".


Well, why should he? It might be a flashy, elegant, easy-to-use gadget, but an iPhone at the bottom of a pop-star's pool is pretty much an ex-phone. When Steve Jobs's elves were putting together the specs for their self-consciously iconic piece of kit, waterproofing wasn't at the forefront of their consciousness. Quite the reverse, in fact. At the base of the iPhone, it turns out, there's a clever little indicator dot that changes colour if it's immersed in water, invalidating the warranty. So that anyone trying to send the thing back to Apple with a note saying "This stopped working; I've no idea why" is going to get found out.

Clever it might be, but it's also quite easy to subvert, according to this guy, who looks strangely like Adnan.

The question for Apple must be: is all publicity good publicity? Or is Adnan Ghalib the sort of celebrity endorsement they could do without?
Email Post
Labels: Britney Spears