Just as we were celebrating the end of the ridiculous blasphemy law, this came along. The Advertising Standards Agency has ruled to ban a television advert for curling tongs on the grounds or religious offence. The ad in question, for ghd, features a number of scantily-clad women doing their hair while praying that their fabulous new look will make other women jealous, get the man of their dreams, or fulfil their other stereotypically shallow Hello! magazine-style desires.

I don't watch that much TV, so I hadn't seen the ad. But apparently it had been fairly widely screened. A total of 23 people protested on grounds of religious offence. One of them was an archdeacon, who really should know better. Anyway, without further ado, here it is (unless it's been taken down since I posted this):

It seemed to me the advertisement crossed a line. I felt very uncomfortable with it. It was targeting the Lord’s Prayer and I felt it was taking the mick. This is not about censorship or about being prudish. It is simply about every individual’s right to signal when they think a line has been crossed.

On the contrary, your Venerableness. It is entirely about censorship and being prudish. But while Pointer and his fellow offendees do indeed have every right to complain to the relevant authorities about anything they like, that doesn't mean that the ASA have any obligation to take them seriously.

It's hard to know what the ASA were thinking of. Their remit is to disallow adverts that cause "serious or widespread offence". I suppose the advert might be considered offensive on grounds of sexism, but religion? With only 23 people bothering to complain, the offence was clearly not widespread. Was it serious? Complainants made much of the fact that the letter "t" in the ads looked a bit like a Christian cross. The advertising agency claimed, with the disingenuousness and pusillanimity that invariably infects companies seeking to justify themselves before tribunals, that this design was merely a "typographic style" that was "in keeping with the style of the current brand campaign". They would have been better advised to take the critics head-on. Of COURSE it looks like a Christian cross. So what? The style they were using is Gothic. Gothic styling draws on medieval religious iconography. It's everywhere. Get over it.

Serious offence? I don't think so.

The other ground of complaint was the phrase "thy will be done". This, the ASA agreed, was, along with the cross, "likely to have particular significance to members of the Christian faith." It's in the Lord's Prayer, after all. (What else could they have used? So mote it be?) Together with the "eroticised images of women apparently in prayer" this was enough to make the ad "likely to cause serious offence".

The whole adjudication was couched in humourless, deadpan prose designed to reassure anyone reading that this is all terribly serious. For example:

The ASA acknowledged that ghd had been using the phrase "a new religion for hair" in their marketing for the past seven years. We considered that ghd's use of the word "religion" in that context did not mock faith or belief, but was intended to refer in the wider sense to an interest or hobby followed with devotion.

Perhaps they should take a look at Bernini's the Ecstasy of St Theresa. 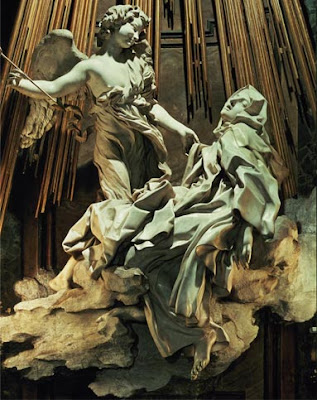 That religious imagery still has sufficient recognition in a secular society is something that Christians ought to be pleased about. It gives them their own marketing opportunity, if they only trouble to take it. Instead of which, they constantly dumb down their brand, strip out the mystery, purge their liturgies of difficult words and beautiful language, and then complain when someone else takes up the slack.

I'm having a hard time trying to work out precisely what sort of jelly-brained believer is likely to be "seriously offended" by these images. Or why indeed the ASA thinks it part of its remit to indulge them. But, ridiculous as it is, this ruling is particularly alarming for two reasons. Firstly, the ad campaign had already been cleared, by the body responsible Clearcast, who seem to have investigated it very closely and did not find it to be offensive. Indeed, as they pointed out in their submission to the ASA, ghd had been using religious imagery to sell their hair-styling products for seven years, without attracting censure:

Clearcast said they had taken a lot of factors into consideration before clearing the ads; they had considered the precedent, heritage, tone, previous investigations and possible offence at script stage and when viewing the finished ads. They said, although 23 people had objected to the ads, they were satisfied they had prevented anything being broadcast that would cause widespread offence.

Pre-censorship of this kind is troubling in itself, because it implies a good deal of second-guessing. The result, especially in today's climate of acute sensitivity, is likely to embrace a stultifying degree of caution. This decision is likely to cause the already conservative Clearcast to become even more restrictive in future.

Just a few weeks ago, the London Underground banned a sixteenth-century painting on grounds of nudity and a poster featuring a man in boxer-shorts advertising a play entitled Fat Christ. The fact that these daft decisions were, after public derision, altered does not mean that the safety-first bureaucratic mindset that produced them is likely to go away.

The second reason for alarm is that previous campaigns in the series had been approved by the ASA. There might be reasons to believe that this particular campaign went "further" than the earlier ones, but it evidently didn't go much further. The suspicion has to be that the climate is becoming more restrictive. Despite what looks like the major setback of the end of the blasphemy law, religious offence-takers have wind in their sails. They feel, for the first time in decades, that the world is moving their way. The small minority of those sufficiently motivated to make a fuss can get their way because of caution, the doctrine of "respect" and desire for a quiet life on the part of regulators, who increasingly have the dangerous power to censor in advance. Today it's curling tongs. What will it be tomorrow?
Email Post
Labels: advertising blasphemy Christianity Church of England culture religion respect

WeepingCross said…
You've doubtless mentioned this somewhere before - but the shift from attacking people for 'blasphemy' to 'offence' represents something important, doesn't it? 'Blasphemy' assumes that there is a truth being traduced in some way; 'offence' treats believers (in anything) as some kind of exotic tribe whose strange and picturesque ways need to be protected. I rather think God can live without that kind of defence, thank you.
12 March 2008 at 22:07

Heresiarch said…
Conceptually, that may be true, father. Legally, blasphemy was originally connected with sedition, and in later times with the notion that defaming religion tended to destabilise society. In other words, it assumes that religious concepts are held sacred, generally, by society as a whole.

Blasphemy hasn't actually gone away; it just now attaches to different things. Such as, for example, the consensus view of climate change. People who take a "heretical" view of such things are considered dangerously destabilising, perhaps because of the fear that if their views become widely believed the collective effort needed to "save the planet" will be somehow undermined.

Your point about exotic tribes is quite pertinent. One of your colleagues, Rev Stephen Coles, of St Thomas’s Church in Finsbury Park said the following with regard to the "Fat Christ" poster: “The itch to censor is something one should resist. I can’t quite see how this could cause offence. We’re grown-ups and Jesus can defend himself. One has to be a little wary of indulging the super-sensitive.”
13 March 2008 at 07:42

silas said…
I have previously complained (admittedly half-heartedly) to the ASA with regard to the use of the word "endless" in a commercial for toilet roll that is anything but endless.

They told me in their adjudication that the word was not being used as an exact description, so they were not going to stop the advert. Fair enough, I felt, as I had just wanted to make a point about the use of false promises in advertising.

My point (finally, sorry, need more caffeine) is this: is there anyone above the ASA in the chain to whom we can complain to about the ASA's decisions?

How can they claim that 23 people with too much time on their hands can be "widespread"? I think I would be able to get more people to complain about any advert, should I want to, but would my non-religious views be similarly respected?

It is, I feel, far too easy for any religious group to complain that something depicted in mainstream (or non-mainstream for that matter) media somehow causes them offence. I had hoped that the removal of the Blasphemy laws would reduce the opportunity for such "outrage", but I fear I have been mistaken.
13 March 2008 at 10:20

Anonymous said…
The ASA is a funny one. Why should advertising a product fall under a kind of censorship that general speech and publication does not? It's not forbidden to offend a religious person, just so long as you're not trying to shift units while you do it. Shouldn't the ASA stick to matters of fact and science, like whether or not anti-oxidants really prevent cancer, as is often claimed?

This post chimed, for me, with some discussion on Collins and Herring's podcast (http://www.comedy.org.uk/podcasts/collingsherrin/) about things you can't say on the radio or TV, but are perfectly acceptable on the internet. When broadcast media censors itself for no good reason, it is no wonder it is so bland, and audiences are falling. Let us just hope that the ASA and Ofcom can keep there hands off our internet.
13 March 2008 at 10:22

Heresiarch said…
Your last point, lost causes, is something that's beginning to worry me. So far, of course, the net has grown much faster than the slow-moving processes of legislation could really control. But they're catching up. Politicians hate the idea that there's anything out there they can't control. Sorry, that should be "protect us from".

From what I can gather, the ASA treat "widespread and serious" as two different things: if the offence is sufficiently serious, it doesn't have to be widespread. But I don't know if it works the other way: a widespread, non-serious offence. It's actually very rare for anything to attract more than a tiny handful of complaints: most people have better things to do with their time, thankfully. So they act on the assumption that the few complaints they do get represent a vast, unexpressed groundswell of offendees.

I like your suggestion, if that is what it was, that you could muster complaints about anything. Maybe that's what needed: swamp the ASA with complaints about every ad out there, see how they cope. At the least, it would encourage them to set a threshold of, say, 500 complaints before they start investigating anything for "offensiveness".
13 March 2008 at 10:38