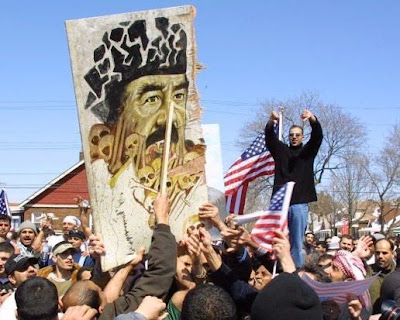 It's five years - Gosh, doesn't time fly when you're having a blast - since American and British tanks rolled unopposed into the fertile soil of Mesopotamia, to be greeted with flowers by happy Iraqis, liberated at last to pursue their dreams and build a model beacon of democracy and peace for the entire world. Freed from the iron rule of the evil monster Saddam Hussein, Sunnis and Shi'ites joined hands in celebration. All sectarian differences were forgotten in the general rejoicing. Small boys clambered aboard the armed vehicles. Women, in gratitude and expectation of undreamed-of new horizons, offered their sexual favours to the heroic Western troops - who nevertheless, chivalrous to a fault, declined with a reluctant smile.

Under the wise planning of Donald Rumsfeld, whose strategic genius was matched only by his mastery of the English tongue, the minimal disruption necessitated by the campaign was swiftly put right. Electricity flowed like the oil, and the oil like water. The Ba'athist regime vanished like snow that falls on a bright summer morning. And any remaining doubts about the justification, even the legality, of the war - though it were more apt to call it a police action - were set aside when Saddam's bunkers were opened, revealing to a complacent world the vast stockpiles of chemical weaponry which, but for the alacrity of the Allies, would surely have been unleashed. Even George Galloway joined in the cheering in the end.

Fears that a power vacuum would arise, to be filled by rival militias and Iranian sponsored religious extremists, proved groundless. Instead, Iraqi men and women formed themselves peacefully into secular, progressive political parties, and within six months the people went trippingly to the polls. In scenes reminiscent of post-apartheid South Africa, a free populace danced the dance of democracy. Music, literature, film and sporting achievement flourished in the what soon came to be referred to as the Baghdad spring. Young men and women walked hand in hand through the verdant gardens. It was even whispered that the Iraqi capital might host the Olympics in 2016.

The country's small but ancient Christian community felt particularly blessed. Tolerated only grudgingly under Saddam, they now found themselves the surprised beneficiaries of the mood of national goodwill. That it was Christian troops, inspired by a born-again president and a theologically-learned prime minister, that had effected Iraq's liberation, was seen to redound to their advantage. Grateful fellow-citizens contributed money towards the beautification of the churches, and when Pope Benedict XVI - well-known for his enthusiasm for the intervention - made his visit to Baghdad in the autumn of 2007, the senior ayatollahs and religious scholars of the whole country came to greet a great friend of Islam and extend their thanks.

But perhaps the greatest legacy of the Iraq campaign was to be found outside its borders. The dictatorship of Syria collapsed. The gulf states introduced progressive reforms, while even Saudi Arabia last year announced a timetable for full democratic elections. Iran had experienced a second, bloodless revolution as the people deposed their reactionary clerical elite. In Jordan, the king had survived, along with his lovely wife, but he was now purely a symbolic figure, spending his hours opening airports and making guest appearances on Will and Grace. Deprived of support from surrounding regimes, Hamas and Islamic Jihad laid down their arms, and Palestinians and Israelis marched together towards a peaceful future. Even Osama bin Laden has recanted. In his latest audio-tape, leaked from his underwater lair (for neither in Pakistan nor in Afghanistan could he find refuge) the al-Qaeda leader urged his remaining supporters to embrace democracy, secularism and the free market. As he declared with a tear in his eye, "America has always been the best friend of Islam".

News of the victory, and its happy aftermath, was especially sweet to Tony Blair, now looking forward to his fourth consecutive electoral landslide. His enemies were everywhere routed. Cook was dead. Clare Short had conveniently forgotten her brief flirtation with resignation, and told everyone who would listen how she had always been fully behind the war. Gordon Brown, prised from the Treasury in the aftermath of Blair's 200 seat victory in 2005, is, it is true, a disruptive force on the backbenches. But no-one pays any attention to him. The Liberal Democrats, humiliated in the election, tried to put all the blame for their anti-war stance on their erstwhile leader's alcoholism. Charles Kennedy had had a few too many whiskies and wandered into the wrong lobby, it was said. As for the million misguided souls who had come onto the streets of London to protest against the war in 2003 - well, where are they now? No-one, apart from Tony Benn, will even admit to having been there.

In the US things are much the same. George Bush, everywhere hailed as the greatest president since Reagan, or perhaps even Roosevelt, is now looking forward to a lucrative future as head of the Iraq Oil Corporation. And while the constitution bars Dubya from running again, Dick Cheney was selected almost without opposition as the Republican candidate. He and his dynamic, attractive running-mate Ann Coulter look to be an unbeatable combination for November. His likely opponent, Joe Liberman - selected as the only Democrat seen as sufficiently pro-war to be credible - has so far failed to identify any issue on which he and Cheney disagree.

With terrorism defeated, dictators displaced, the price of oil reaching a twenty-year low and the people of Europe and America looking forward to an era of unparallelled peace, prosperity and security, it seems like the good times will never end. To cap it all, Britain's most successful bank, Northern Rock, last month posted record results. They plan to open a new office in Baghdad.
Email Post
Labels: Blair Iraq

Anonymous said…
You missed the bit about Prince Harry single handedly rescuing a platoon of captured allied soldiers and whilst doing so wiping out a squadren of elite Taliban fanatics, armed only with a pen knife.
18 March 2008 at 18:18

silas said…
It seems G W Bush has been reading this post and taking it as an accurate report of what did happen!

Heresiarch said…
I was actually inspired by this from Con Coughlin, which seems to embody much the same kind of wishful thinking.
19 March 2008 at 19:08