Lady Thatcher's recent health problems - fortunately not serious - have produced the kind of hospital forecourt news reports once associated with the Queen Mother. And like the Queen Mother she appears to have been accorded the status of a national matriarch, the minutiae of whose medical condition is deemed to be of pressing importance, or at least interest, to the whole population. This, in turn, has led to a re-examination of her place in the British psyche. Charles Moore, writing in the Sunday Telegraph, claims that she is "in danger of becoming a national treasure". He relates an incident in which the 82-year old was applauded while leaving a restaurant, and also cites the eagerness with which Gordon Brown seized the opportunity to invite her to 10 Downing Street.

(That wasn't the only occasion in which the elderly former prime minister has allowed herself to be photographed in somewhat dubious company. Here, for comparison, is a scarcely credible but apparently genuine image of her being embraced with a little too much familiarity by Israeli "psychic" Uri Geller.) 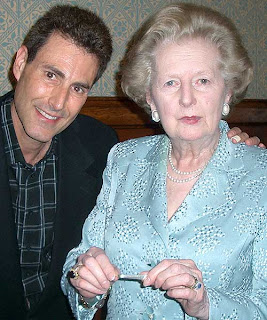 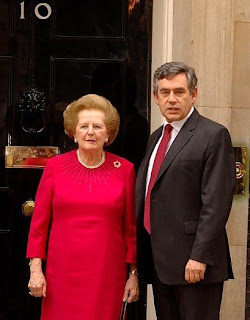 It was certainly notable to see the political establishment, from the PM down, lining up to wish her a speedy recovery. But then the euologies and encomiums of the appalling Ian Paisley when he retired last week show that the polite hypocrisies of well-wishing are not confined, these days, to the immediate aftermath of death. Age, too, usually mellows people's attitudes. Tony Benn, once a figure of almost mythic threat among both conservatives and moderate members of the Labour Party, is now merely a cuddly old gent with a tape-recorder and a flask of tea. And while younger generations may take her legacy for granted, there remain many who will never forgive her for having been right. The Huffington Post, for example, had to take down comments when its report of her hospitalisation was inundated with abuse and vilification. Out there, there are still many who hate her with the passion they felt in 1983.

Partly, her problem lay in bad PR. Her policies were always considerably more moderate than her language. That they seemed radical at the time was due largely to the atmosphere of national despondency and stultified thinking in which she operated. These days, people who looked at her as the embodiment of the Antichrist, their backs ensconced comfortably on ministerial chairs, implement policies of which she would never have dreamed. They ignore Parliamentary conventions and ride roughshod over ancient civil liberties in a manner which would have horrified the Iron Lady. But they don't face even a fraction of the screaming, hysterical opposition Mrs Thatcher had to endure.

She was, of course, a divisive figure. Only once, during the Falklands War, did she become the focus of national unity. And even that, among her opponents, dissipated quickly. Nowadays, it would appear, politicians of all parties quarrel only over their claim to her legacy. Yet herein lies the tragic irony. For while her achievements seem, in retrospect, almost miraculous (although they only bore their full fruit years after she was ousted from Number 10) they are also far more fragile than they might appear. Over-regulation, the imposition of indirect rule from Brussels (the very subject of her famous and prescient Bruges speech in 1988), the collapse in democratic trust and Gordon Brown's surprising financial profligacy combine to threaten Britain with a crisis almost as serious, if much less immediately apparent, than the one Margaret Thatcher rescued us from in the 1980s. But can any of our pusillanimous, focus-grouped, centre-hugging politicians find a way out? The omens aren't good.
Email Post
Labels: conservatives Politics Thatcher