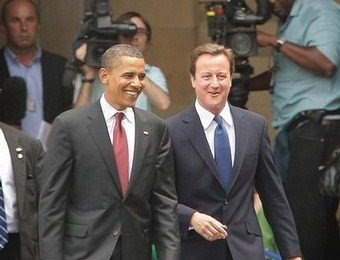 The other day, Iain Dale was explaining to Telegraph readers why he - and not a few other Conservatives - have "gone over" to Barack Obama. Such an eventuality is deemed to need explanation for various reasons, among which are the traditional closeness of the British Conservative party to the Republicans in the USA, the notion that the two right-leaning parties are ideologically fitted, and the enthusiasm with which the Tory leadership had previously embraced McCain. Nevertheless, Dale is far from alone. It's an open secret that several members of the shadow cabinet are rooting for the Democrat, and have been for months. As he writes,

Many shadow ministers remain publicly coy about their leanings, but it's remarkable how few, even privately, express any enthusiasm for the McCain-Palin ticket. Senior whip Simon Burns and the shadow business secretary, Alan Duncan, have both outed themselves as Democrat supporters, but few others are willing to go on the record.

One shadow cabinet member is a signed-up member of the Obama fan club, yet believes if he were to admit to it publicly, it would damage his status within the party. He likens it to the reluctance of so many Tory MPs to sign up to David Cameron's leadership campaign in the early days. "We thought people would think we had taken leave of our senses," he tells me. "Cameron and Obama are both agents of change, in a way that their opponents never could be." He adds: "The Conservative Party is always suspicious of change - until it has been proved to work."

For Dale himself, supporting Barack Obama is a recent and faintly disturbing development, almost against the course of nature. He thought he would always support the Republicans; it was only the combination of McCain's disappointing speech at last year's Tory conference and Obama's own charisma that swayed him. But others made the "journey" much earlier. "Obamacons", as a species, were identified by Conservative Home as long ago as January. At around the same time, Daniel Hannan - of the Telegraph and the European Parliament, I'm not sure in what order - made the "Conservative case for Obama". "He's a shaft of sunshine in an often grey landscape", said Hannan, though more recently he has been fence-sitting and asking for advice from his readers.

Is Tory support for Obama an unnatural form of political cross-dressing, a phenomenon as strange in its way as the friendship between Tony Blair and George Bush? It's hard to see how.

Although I've happy memories of Ronald Reagan denouncing Commies and cracking good-humoured jokes, I've never really understood why Republicans and Conservatives were supposed to have so much in common. It can't have been belief in the free market: all American politicians believe in the free market to a greater or lesser extent, and while there is a periodic (and worrying) upsurge of protectionism and isolationism in the States, it has been a rallying-cry of Republicans and Democrats alike. It can't have been religion, either. For one thing, neither the Conservatives nor Labour over here "do God". Yes, the Tories have always had their Widdecombes, and have traditionally supported the establishment of the Church of England. But that was always bound up with belief in country, nation and monarchy rather than belief in God. The Conservative position on the Church of England, it seems to me, was always best summed up by Churchill, an agnostic, who declared that, like a flying buttress, he preferred to support the church from the outside.

It can't have been historical experience, either. Some of the best Anglo-American relationships have in fact been Tory-Democrat. Harold MacMillan got on much better with Kennedy than he had with the Republican Eisenhower, whose betrayal of Britain over Suez fatally weakened western influence in the middle east to an extent only now being appreciated. Earlier, it had been the Democrat FDR who ended (Republican-led) US isolationism and brought his country into the Second World War. True, the Major-Clinton relationship was a disaster; but so was the Conservative party's relationship with the Bush administration during the Blair years. Indeed, it was as a dissident in his own party that John McCain was so appealing to Tories who couldn't understand (or resented) the closeness of the prime minister and the president.

Dale complains that the Republicans have "turned from the Grand Old Party into a narrow religious sect. It has lost its compassion in a desperate rush towards social fundamentalism at the same time as losing all sense of fiscal responsibility." But some Republicans were always pretty far out there. Remember Peter King, the Republican Congressman who campaigned tirelessly for the IRA while they were busy planting bombs on the British mainland? Or Senator Jesse Helms, who as chair of the Foreign Relations Committee attempted to stop British companies doing business in Cuba? Nixon was a Republican. 'Nuff said.

I suppose it's a vaguer sense of being "on the right". In most countries, the political struggle can be reduced broadly to a left-right contest, in which one group of politicians define themselves as "conservatives" and another as "progressive". Democrats typically like to think of themselves as "progressive", as do members of the Labour Party; many Republicans like to stress the term "conservative". So if you're a Conservative, and you hear an American claiming to be "conservative", it's not surprising that you'll expect to see eye to eye.

Sociologically, one might expect Republicans and Tories to be the same sort of people; likewise Democrats and members of the Labour party. And, indeed, this seems to be the case: the Republicans look to the small-c conservatives of the American heartland, while Democrats find reliable supporters among trade union members, ethnic minorities and actors. However, the political compass is set so differently in the USA that in terms of actual policy the Conservative Party and the Democrats are usually indistinguishable. The Labour Party, even in its recent incarnation of New Labour, is far to the left of anything imaginable in Britain, the Republicans far to the right. Tories and Democrats meet naturally in the middle.

Two small examples. First, health. Although Bill 'n' Hill failed miserably in their efforts to introduce it, (and I doubt Barack Obama will have much luck, either, given the state of the economy) most Democrats favour a system of universal health insurance. The British Conservatives, without going that far, favour reform of the NHS to allow greater consumer choice and more private involvement. By contrast, Labour remains ideologically wedded to state control, while the Republicans see nothing wrong in a system where many people have little or no access to healthcare. Starting from different places, Democrats and Tories want to end up in a similar place.

Then there's the economy. Under Clinton, as under the last Conservative government, sound finance was a priority. Nigel Lawson used to boast about balancing the budget. Bill Clinton bequeathed to his successor an economy in surplus. In their different ways, Bush and Brown blew it: Bush by slashing taxes on the rich while squandering vast sums on defence and on needless wars, Brown by unsustainable spending. David Cameron and George Osborne, even before recent events forced everyone to reassess their priorities, spoke of the need for fiscal rectitude.

Though a Conservative, I've always assumed that if I ended up in the US I would support the Democrats, for the simple reason that I find their policies far more personally congenial. But at the same time I've wondered how a Labour supporter would cope. Presumably they'd end up like Michael Moore, the man who probably cost Al Gore the 2000 election.

There are also sound pragmatic reasons why Conservatives should be looking forward to a victory by Barack Obama:

- A victory for Obama will be a shot in the arm for David Cameron in more ways than one. It will demonstrate that youth and charisma can triumph over experience at a time of national danger. It will show, also, the triumph of normality. By the standards of most candidates Barack Obama isn't normal, given the exoticism of his background - something that Sarah Palin has been unattractively reminding everyone of. But compared with the elderly and unpredictable John McCain or the almost abnormally ordinary Palin, Obama at least looks and sounds like a presidential candidate is supposed to look and sound. Presentationally, Cameron is in Obama's mould (just as he is in Tony Blair's). Gordon Brown isn't. Brown is much more like McCain: a bit awkward, less polished and spun, and more than slightly weird.

- An Obama victory would be a good omen for the Tories because it would show the potency of the message of change in an era of fear and economic dislocation. On the other hand, a vote for the grizzled McCain - despite his disputed credentials as a maverick - would suggest a safety-first approach that would augur well for Gordon Brown.

- An Obama-led America will be much more popular than a Bush-led one has been, or than a McCain led America could possibly be. Barack Obama will do much to heal the stupid and dangerous gulf that has opened up between Europe and the US, which has threatened to leave Britain at drift in a widening Atlantic. Of course, conflicts and more minor irritations will arise. But knee-jerk anti-Americanism will be much less in evidence.

Europe and America have far more in common than divides them, and with China and Russia in such a strong position and our economies increasingly vulnerable the need for common Western solidarity has rarely been greater.

- In the wider world, Obama's background will be far less alienating than Bush's or even McCain's. It will be difficult to portray him as an American chauvinist or (for obvious reasons) a white colonialist. The US can no longer throw its weight around, but it can still lead by example and moral conviction. It must exploit soft power. No Conservative can desire the drastic reduction of American - and thus Western - influence in the world, but that would be the likely result of a Republicn administration. For all McCain's attributes, if he did pull off an unlikely win much of the credit would attach to Sarah Palin's galvanising of the Republican base - and they would want their reward.

- Despite Obama's popularity in Europe, his victory would arguably benefit the Eurosceptic cause, because it would make the alternative to closer European integration - a strong transatlantic relationship - seem far more attractive. Who would you choose - Barack Obama or Nicolas Sarkozy?

All in all, I think, a no-brainer.
Email Post
Labels: conservatives Obama Politics US election

Anonymous said…
"the one" is not exactly Daz in preference to Ariel, the choice is Ariel and Persil.

Anonymous said…
stupid and dangerous gulf that has opened up between Europe and the EU...