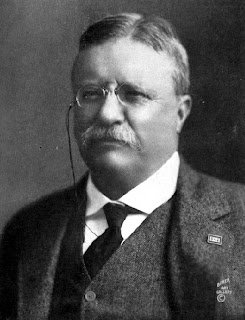 In today's Independent, Johann Hari is less than impressed with John McCain's personal hero, Theodore Roosevelt. McCain has described this all-American hero - probably the first president who acted and thought like the leader of an international superpower - as the strongest influence on his political thought. Hari is appalled. Citing Roosevelt's view of war as "spiritually uplifting", he accuses the 26th president (1901-1908) of being a war criminal, responsible for the deaths of 3 million Filipinos and the author of a policy of naked colonial aggression.

He wanted to take over Panama and build a canal for US goods through it. The Colombian government refused to surrender its territory. So he spent a fortune trying to stir rebellion in Panama, and as soon as there was a hint of it, he sent in the US navy to grab the land. McCain calls this "energetic and forward-looking". The Attorney General called it "illegal". McCain says now that Roosevelt's foreign policy is his model. "He sought to preserve peace and order," he claims, "by confronting potential adversaries with America's resolve and readiness to fight, if necessary, to protect its interests."

Hari admits that Roosevelt fought against corruption. But this isn't to McCain's credit: "It is the aggression that he loves in his Teddy, not the reform."

This is mostly rot, of course. Roosevelt was a man of his time, and as such he used language and behaved in ways which we might find shocking or even reprehensible. In many respects he was the USA's Winston Churchill. Like Churchill he emerged from a sickly childhood to embrace a love of the outdoors, military life and manly pursuits such as hunting. Like Churchill again, he was a writer, producing books on history as well as natural history, a larger than life personality with a flair for a striking phrase that sometimes got him into trouble. Both were mistrusted and resented by more conventional colleagues. They even looked rather similar - although, interestingly, on the few occasions the two met they did not get on. Roosevelt accused the younger man of "levity, lack of sobriety, lack of permanent principle, and an inordinate thirst for that cheap form of admiration which is given to notoriety." Takes one to know one, I suppose.

Churchill's reputation is even safer than Teddy Roosevelt's, but that doesn't stop people dredging up embarrassing quotes about Gandhi or the desirability of using poison gas on Kurdish civilians. But as the quote from McCain shows, his enthusiasm for Roosevelt is based on more on the president's most famous dictum of "talking softly while carrying a big stick".

Nevertheless, McCain's evident enthusiasm for the older Roosevelt left me wondering if it didn't influence his surprising choice of running mate. There are a number of interesting similarites between Theodore - the most macho of US presidents - and the former beauty queen Sarah Palin. Both have a tough, outdoors, gun-toting image, for one thing, and a clear (possibly overbearing) sense of American exceptionalism. Both are enthusiastic supporters of the military, Roosevelt as a former colonel, Palin as the mother of a young soldier. Roosevelt was governor of New York at the early age of 40, while Palin became governor of Alaska at 42. Roosevelt had six children; Palin has five. For both, their striking taste in eyewear forms an integral part of their public image. And like Palin, Roosevelt had served less than two years as governor of his state before becoming the Republican vice-presidential candidate. In Roosevelt's case, he served less than a year as VP before the assassination of McKinley put him in the White House. Given McCain's age and uncertain health, that almost seems like an omen.

Of course, there are differences. Palin is far more of an outsider, for one thing. Roosevelt was a member of the New York aristocracy, attended Harvard, and was a war hero before entering politics. He was also a far more impressive figure intellectually, and in many ways ahead of his time. He was an early conservationist, for example: not quite our Sarah's style. The best remembered incident in his life came when he passed on the opportunity to shoot a bear cub. Palin, on the other hand, is better known for pulling the trigger. And I would be surprised if Sarah Palin action dolls, fun though they are, prove to be as enduring and well-loved as teddy bears.
Email Post
Labels: history Politics Sarah Palin US election

Anonymous said…
You might as well have observed that Roosevelt was blind in one eye, like Gordon Brown. Or that he was a maverick who tried to break the two-party system, like Ross Perot. Or that he was a great admirer of Darwin, like Richard Dawkins.

And Palin? She could have fought for her country. They have lady soldiers now, y'know. But, like Bush, Rumsfeld, Cheney et al, actually fighting for America didn't fit in with her busy schedule. Chickenhawk, I believe is the term.
16 October 2008 at 18:31

Heresiarch said…
The Darwin point: I should have included it as one of the differences (I don't think Sarah's that great an admirer...) Thanks for pointing it out.
16 October 2008 at 18:46

Anonymous said…
Have you seen this?

Anonymous said…
Johann Hari FFS! I wish for a McAngry/Palin victory just to see the faces of the false liberal left.

Seems to me whoever wins is going to be stuck for the wonga.

and it could be tighter than we think or the BBC wishes to admit.

Anonymous said…
Oh Noes! False liberal left? Damn, I thought my blazer badge and tie pin were provided by the Real Liberal Left. Or are you using 'false' in a wonderfully quaint, medieval sense?

And do you really want a tired old hypocrite and an ignorant liar to be the next two leaders of the free world? Wow.

On second thoughts, maybe genial Joe Sixpack suffering the consequences of voting in the rich bastards' friends at the start of a recession will shatter the Republicans once and for all. The GOP could split into genuine conservative and crazy fundamentalist parties. It's a lovely thought.
16 October 2008 at 20:34

True liberals are classical liberals, thats the left before Marx destroyed it with scientific fundamentalism.

"ignorant liar" I suppose thats something to do with the liberal left media reporting of the firing of the corrupt official thingy?

As said i dont think you have the cash for either to make a difference, at least Mcangry understands the questions even if he has not got any answers.

2 very poor candidates all in all.

And another thing, if Obama was white he would have not got any where near the white house, its pure 100% tokenism.

Anonymous said…
Nice to see the old race card being played - if Obama was white he'd be much further ahead. Just as if Palin were a man our host, the Great But Libidinous H, wouldn't waste his time trying to build her up into a major political phenomenon. He's have clocked her for the smug pillock she is.

More interesting than Obama's race is McCain's baldness. Can a bald man win in the TV age? I doubt it, though I'm not sure why.

Heresiarch said…
Hey, I'm not trying to build her up into a phenomenon: she is a phenomenon. Admittedly, were she a man she'd be, well, Mike Huckabee.

3 things about Palin:
1) Some of her views are rather peculiar, and her understanding of international politics isn't very sophisticated, and she's out of her depth. As such, she's not ready to be vice-president.
2) She's a fine figure of a woman, and also a gift to parodists. As such her extraordinary media profile isn't hard to explain.
3) Her achievement in advancing from a local council seat to the governorship in little more than a decade, with no family wealth or political connections behind her, and not much in the way of professional experience or qualifications, is a very remarkable achievement. She's not an idiot.

These three facts have very little relationship with each other.

Baldness doesn't seem to be a problem on the continent. I'd guess part of the reason Sarkozy is having trouble being taken seriously at the moment is that he isn't bald.
17 October 2008 at 16:58

LETS BE CLEAR, LETS NOT DIP INTO LEFTIST POST-MODERNIST "IF I THINK ITS RACISM IT IS RACISM" ANTI ENLIGHTENMENT BULL.

He is a poor candidate, if he was white he would have been out of the race a long time ago. THATS NOT TO SAY BLACK PEOPLE ARE STUPID (Thomas Sowell certainly failisifes that on his own)

DO YOU UNDERSTAND AT PLANET ZOG?

Once again McCain too is a poor candidate. And just to add, I do not think this is a very good election to win, for example when Nulab won in 1997 they had a great set of cards, who wins in Nov has a crap deck.
17 October 2008 at 19:09

Anonymous said…
Sorry H, I think she is an idiot. Becoming a big wheel in a tiny state like Alaska is about as challenging as becoming elected mayor of Hartlepool. But time will tell. If she's as classy a candidate as you (and others) seem to think, an Obama victory won't be the last we'll see of her. Gazza was right when he said prophesying is hard especially when it's about the future, but I predict she will sink without trace. Especially if she actually becomes VP.
18 October 2008 at 14:30

TYPING LIKE THIS IS THE MARK OF A LOON! IT'S LIKE SHOUTING REALLY, REALLY LOUDLY IN A BAR, IT MARKS YOU OUT AS A CRANK, NOT A FORCEFUL, SERIOUS THINKER. GET A GRIP, MAN, OR THEY'LL GIVE YOU A COLUMN IN THE DAILY MAIL!!!!
18 October 2008 at 14:36

Anonymous said…
Incidentally, H, a much better parallel to draw might be between Sarah Palin and another obscure senator - Joe McCarthy. Like him, she is stirring up hatred of the 'un-American' to serve very dubious ends. Palin seems as mediocre as McCarthy in terms of brain power, but like him she knows how to work a crowd. Perhaps Mrs P. will brandish her laundry list at some point and claim it names all of Obama's terrorist associates?
21 October 2008 at 19:46