The Jewel of Medina is out, in America at any rate. An independent publisher, Beaufort Books, best known for bringing out If I Did It by O.J.Simpson (another book dumped by its original publisher) has taken up the challenge of braving the fanatics. Sherry Jones's inelegant reworking of the Lolita myth, set in seventh-century Arabia, is now before the public. And thus far the feared mass protests haven't materialised. I could be speaking too soon, perhaps; but, as with Fitna before it, Jewel would seem to confirm that Muslim anger is often worse in anticipation than in reality.

A conclusion that would not seem to apply to the book itself. Having read the opening chapter when it appeared online in August I wasn't expecting a masterpiece: simultaneously turgid and flowery, it suggested that Jones's ambition greatly exceeded her ability as a writer. It was her intention, she told Asra Nomani of the Wall Street Journal, "to honor Aisha and all the wives of Muhammad by giving voice to them, remarkable women whose crucial roles in the shaping of Islam have so often been ignored - silenced - by historians." An aim either worthy or cringe-makingly ingratiating, according to taste, but one that ought to have rung alarm bells for anyone who cares about fiction. Novels written with a purely didactic intent are rarely very good.

In an early review, in the LA Times, Laurel Maury describes Jewel as "a second-rate bodice ripper-style romance" which, while "readable enough", "suffers from large swaths of purple prose". I should say so: the stench of dead murex snails fairly wafted from the screen in those extracts I saw. Maury picks the following representative sentence: "From my camel's hump I could feel the leaf-kissed air moving like a cool, moist cloth across my brow as I inhaled the fresh clean scents of petal and blade and springs gilding the morning." Too many adjectives, Mrs Jones. And try working a bid harder on your metaphors. How can a spring "gild the morning"? Silver it, perhaps.

Clearly description isn't Jones's strongest card. Maury concedes that "once strife among Muhammad's wives begins to develop, the story becomes entertaining," and even credits the author with the ability to "make a plot dance". Her characterisation, though, sounds almost as wonky as her prose. Aisha "has the mind of a top-notch general stuffed into the body of an emotionally immature child" and "sounds like a mix of Gloria Steinem and Pippi Longstocking". Other characters are one-dimensional, while the author herself isn't in full control of her material. "I suspect Jones wanted to write a feminist text, sort of Islam 101 for the post-Buffy the Vampire Slayer generation," suggests Maury. Yet her Aisha comes across as "a wayward girl who needs to be disciplined by an older, wiser male."

The initial criticism of the book, by the Texan academic Denise Spellman, was that it was historically inaccurate "softcore pornography." There would seem, in fact, to be little or no sex in the book (just as well, perhaps, though I can imagine Jones might have been a strong contender for this year's Bad Sex Award if there had been). What there is, rather, is a failure of imagination. Jones's Aisha is not plausibly a woman of the seventh century. In Egypt Today, Ethar El-Katatney (who has also read Jewel) comments that the author

essentially converts Aisha of the seventh century into Aisha of the twenty-first century Western world. In The Jewel of Medina, Aisha’s dreams center on her freedom, desire for power and control of her own destiny. She views her arranged marriage as “a fate chosen by others, as though I were a sheep or a goat fatted for this day,” and hates the “ridiculous inventions such as purdah and hatun and durra [second wife] and their traditions of male superiority that made chattels of women.

On the other hand, perhaps out of deference to (real or imagined) Muslim sensibilities, Jones makes so many moral concessions to the patriarchal attitudes of the time that Aisha's supposed strength of character comes across as brattish. Another interesting early response to the book comes from Ayaan Hirsi Ali, who makes the point that,

Ms Jones does not question the morality of the prophet. She does not judge him in a negative way. There is no hidden meaning between-the-lines that will inspire young Muslim female readers to question their faith or the inconveniences of marrying against one's will, nor of sharing your husband with a dozen other women, nor even why it is wrong to be married off as a child to a man four times your age. In fact, Ms Jones makes the same lame excuses that Muslims make to condone the prophet's behavior.

For Hirsi Ali, Jones's main problem is that she is far too respectful. As a result, she "does not come close toward helping Muslim women imagine that there is a reality beyond subjugation ....Obedience as a lesson is not something Muslim girls need to read about in novels; it is a concept they have to live with every day." And, more seriously, by tip-toeing around the explosive issue of Aisha's age, Jones is in danger of becoming an apologist for misogyny and child abuse:

Ms Jones does not condemn Mohammed for having sex with Aisha at the age of nine. The sex scene is not described graphically and its conclusion for Aisha is described by Ms Jones as something Aisha always wanted. All the behavior considered immoral and misogynistic in the modern day Western attitudes that offends Muslims are repeated in the novel and affirmed. Rather than being a challenge to Islam, The Jewel of Medina is a pro-Islamic, pro-Mohammed novel and could easily serve as propaganda material for any Muslim organization promoting the idea that Muslim women must not only accept the position that Islam ascribes to them but should also view that inferior position as a gift from God.

That's the point, of course. A novel about Aisha need not be inflammatory; but a novel about Aisha that was any good would almost by definition be highly controversial. It would have to tackle the age question head-on: not because Aisha's extreme youth is definitively established (though it is likely) but because it is a matter that continues to have the most serious ramifications for children today. Across the Muslim world, from Afghanistan to Morocco, even in Britain, underage and sometimes prepubescent are married, usually without their consent (if consent were even possible); and often these marriages are then consummated.

In Iran, after the revolution, the Ayatollah Khomeini reduced the age of marriage for girls to nine, in emulation of Aisha and as a means of demonstrating the specifically Islamic character of his new republic (though after his death the age was raised to fourteen). In Saudi Arabia there is no minimum age for marriage at all. There have been attempts by human rights activists to fight premature matrimony, but one leading cleric Dr. Ahmad Al-Mub'i, stated in a recent television interview that it was permissible to marry even babies. He continued:

But is the girl ready for sex or not? What is the appropriate age for having sex for the first time? This varies according to environment and traditions...The Prophet Muhammad is the model we follow. He took 'Aisha to be his wife when she was six, but he had sex with her only when she was nine.

In Afghanistan, even with the Taliban out of power (though for how much longer?) the marriage of ten or eleven year old girls remains routine. In Yemen, where the official age is fifteen, there was the high-profile case of 10 year old Nojoud Mohammed Ali, who went to court to get a divorce from her 30-something "husband" who had repeatedly raped her. And in Morocco, a leading cleric - head of a foundation that runs 60 schools - caused a storm of protest recently when he used the example of the prophet to argue that the marriage of nine-year old girls was acceptable in Islam. "I am a confirmed theologian and I have not made this up. It is the prophet who said it before me," said Sheikh Mohamed Ben Abderrahman Al-Maghraoui, responding to his critics. "Those who criticise me, like the press or Moroccan television as well as the lawyer who filed a complaint (against me), are part of a secular attack against the Islamic nation and its theologians." 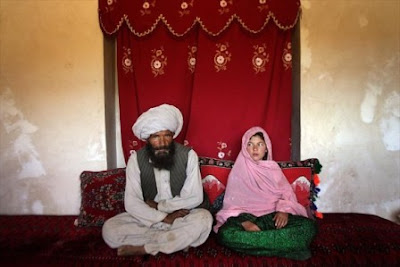 Premature marriage takes a heavy toll in terms of female sexual health, psychological damage and limited life-chances. Yet there's another story to be told, too: one that takes into account that early marriage was a feature of many societies throughout much of human history, Christian as well as Muslim and neither. Even in western Europe, where people have always tended to marry relatively late, aristocratic brides were not uncommonly in their early teens. These women were not all suffering victims; as widows, still relatively young and vigorous, they might be powerful and rich. Aisha herself, by all accounts, was such a widow.

The story of Aisha sits at the intersection of two sacred modern taboos: the western construction of paedophilia as a supercrime, and the almost equally totemic belief in multicultural respect. A novel that took her life as material for a truly fearless examination of these issues would probably outrage everybody. It would be dangerous. It might be great. But it wouldn't be anything like The Jewel of Medina.
Email Post
Labels: blasphemy books censorship culture free speech gender politics Islam multiculturalism religion

Anonymous said…
What a lucid and sane summary - this is what I come to Heresy Corner for, the issue stripped it to its essentials and illustrated with judicious quotation