On the face of it, the behaviour of Jonathan Ross and Russell Brand - in making obscene phone calls to the veteran and well-loved actor Andrew Sachs concerning his granddaughter - provides yet more evidence that the feather-bedded, complacent, self-regarding and overprotected BBC no longer deserves the licence fee. That these two might think such a stunt amusing is perhaps not so surprising - although it is a comment on the increasing uglification of the public sphere that it was passed for broadcast. What really rankles is that we are all forced to pay for these oafs. I sincerely hope they are prosecuted for their phone-call; but I equally know that they won't be.

As a funding model, the licence fee is an anachronism, and the Beeb's claim to provide unique quality programming is hard to sustain when set against the inflated salaries paid to the likes of Ross from money expropriated from the public. In the present climate, with advertising revenues under pressure, it's arguable whether Ross would manage to secure such a lucrative deal in the private sector; but if he's worth £6 million a year on the open market then that is where he should be. The licence fee was surely not designed to subsidise the lifestyles of the rich and famous. But then it's increasingly hard to see just what the licence fee is for. It survives, I suppose, largely through inertia; if it didn't exist, and someone suggested it as a sensible way of funding British broadcasting, it would rightly be dismissed as an unfair, regressive and unnecessary tax. If this latest incident adds to the pressure for reform - or, better still, abolition - then Brand and Ross may turn out to have performed a public service. 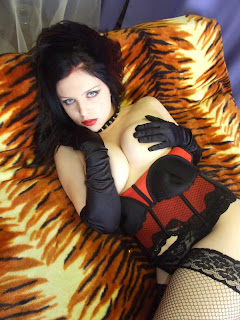 That said, there may be a little more to the story than first appeared. The Mail, which only ran with the story a week after the offending segment was broadcast, now reports that the young woman Russell Brand claimed to have slept with, Georgina Baillie, is on her way back from Austria "where she had given a performance of her horror themed show at Club 666 in Vienna with dance troupe Satanic Sluts Extreme". They also note that she once aspired to be a page 3 girl. And the paper, which today gave Melanie Phillips a full page to vent her predictable spleen -"What kind of degraded cultural universe are we all now living in?", she wondered - celebrated the discovery by plastering photos of the 23 year old - who goes by the professional name of Voluptua - all over a splash. She's certainly a sight for Halloween week. And she also looks like Mr Brand's type.

The Mail on Sunday yesterday quoted Georgina's mother Kate as saying that the situation was "awful" - and that Georgina herself didn't want to comment. Which rather suggested that Miss Baillie was an innocent abroad. On her Myspace page, by contrast, Voluptua describes her status as "swinger" and lists among her interests "pretty men with tattooes". She adds: I LIKE TO PARTY, I DON'T CARE IF YOU CALL ME A "WASTER" OR EVEN A "GROUPIE" BECAUSE I AM HAVING SO MUCH MORE FUN THAN YOU AND LIVING THIS WAY MAKES ME HAPPY.

Andrew Sachs may well have been deeply shocked and upset by the vile insinuations of two of the country's highest paid stars. But if he has been following his granddaughter's career at all closely shock is unlikely to be a new emotion. Brand and Ross, meanwhile, are undoubtedly enjoying this confirmation of their edginess (for the over-the-hill Ross, an especially gratifying experience). Ross is currently promoting an autobiography, as it happens. It's called Why Do I Say These Things?

As for the Mail, the story allows them to have the best of both worlds. After a couple of days self-righteously tut-tutting about the foul mouths of two stars and the lack of accountability of BBC executives, they get to fill their pages with photos of a scantily-clad rock-chick. Titillation for the Mail (and perhaps for their readers) is always made acceptable when served up with moral condescension. And Voluptua - who announces that she has "recently played a prostitute/ glamour model in a high profile tv pilot comedy/drama called "Trollops of Threadneedle Street" - gets a welcome blast of publicity. Everybody wins. Apart from Andrew Sachs, presumably.
Email Post
Labels: BBC culture journalism Manuelgate

2. Someone once described Aldous Huxley's attitude to sex as 'lip-smacking disgust', which sums up the Daily Mail and, presumably, most of its readers.
27 October 2008 at 22:02

Anonymous said…
"And she also looks like Mr Brand's type."