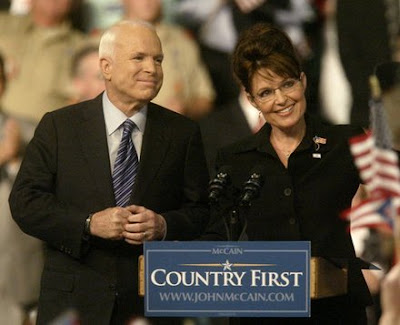 In chess notation, questionable moves are signified by a ?, terrible moves by a ??, and surprising but inspired moves by a !. A further category of move exists which is notated thus: ?! - it might possibly be inspired, but is more likely to be a blunder caused by the chess-player in question overlooking something obvious, like his opponent's knight lurking menacingly behind a pawn.

John McCain's selection of Sarah Palin looked for a while like it might fall into the ?! category. If not the @#!? category. McCain is actually more of a poker player, which may explain his willingness to stake everything on an unseen card. Now we know that Palin's effect on the campaigned turned out to go little beyond providing opportunity for Tina Fey to achieve worldwide stardom. So it's getting hard to remember just how exciting a prospect she at first appeared. And even harder to understand how the McCain team didn't realise what they were letting themselves in for.

Some new light is shed on this mystery in a long article for the New York Times magazine by Robert Draper. Draper has spoken to "around half a dozen" of McCain's senior advisers, and others lower down, most of whom "until very recently" were convinced of their candidate's eventual victory. He provides a fairly devastating analysis of what went wrong. It looks as though the Palin debacle was an accident waiting to happen, born of the McCain team's desperate search for definition and focus.

Draper describes an "identity crisis" which led to a meeting of Republican strategists on June 24th. One of them, Matt McDonald, admits that "we still couldn’t answer the question, Why elect John McCain?" They "needed a clear narrative. None, so far, had been forthcoming."

Several approaches had already been tried out and discarded in the course of the campaign. First came the "Heroic Fighter v. the Quitter" - in which McCain's determination to stay and win in Iraq was contrasted with Obama's desire to get out as soon as possible. Much was made of his credentials as a war hero. This "metanarrative" petered out, however, when it became clear that most Americans were already beginning to worry more about their jobs than about a faraway war.

The next idea was to portray McCain as a "country-first deal-maker", almost above party politics. That way they would be able to distance him from George W Bush while casting Obama as a slavish follower of the party line. "But", notes Draper "the matter of which candidate had shown more acts of bipartisan daring failed to become Topic A". Third came an attempt to depict McCain as simply more serious and substantial than his rival, with Obama derided as a "celebrity" unready to lead. The idea was to establish an "Icarus factor", as one of the aides put it. Unfortunately an America hooked on celebrity culture didn't seem to mind: the jibes merely emphasised the Democrat's monumental cool - especially when Paris Hilton made a surprisingly articulate foray into presidential politics. The tactic also came unstuck when McCain made a number of gaffes (talk of the "Iraq-Pakistan border" for example) that didn't make him seem all that ready to lead himself.

At this stage they were getting desperate. So they hit upon the "maverick" idea. Counterintuitively, they would put forward the long-serving Washingtonite John McCain as the anti-establishment candidate while the youthful black first-term senator with the strange name represented more of the same. It was a testament to the force of Obama's message of change that such a line was even attempted; but although it had been foreshadowed during the later stages of the primary race when the attempt was made to portray Obama as an elitist it ran up against McCain's record, age and affiliation.

By this time it was late August, and the choice of running mate had to be made. Most of the names in the frame were too nondescript, or too closely identified with the mainstream, to support the new narrative. Moreover, "polling data suggested that none of these candidates brought significantly more to the ticket than any other." Which is when one of the team suggested Sarah Palin.

Her attractions included the possibility that she might pick off some of the disaffected Hillaryites, that Newt Gingrich had described her as a "rising star", and, especially, the way she had "blasted through the oleaginous Alaska network... much in the same manner that McCain saw himself doing when he was a young congressman." She would therefore burnish McCain's maverick credentials. But significantly, Draper claims, what secured Palin the nomination was the thought that she would look good on the cover of Time magazine. It would appear that Palin's much discussed appeal to the Republican base - the Godfearing, gun owning patriots who believe Charles Darwin was some sort of pro-abortion socialist - hardly figured in these initial discussions.

Most damningly, Draper reveals that senior McCain aides, such as chief strategist Steve Schmidt and creative director Rick Davis, were fully aware of Palin's flaky performances in interviews even when the questions were largely confined to Alaska:

One tape in particular struck Davis as arresting: an interview with Palin and Gov. Janet Napolitano, the Arizona Democrat, on “The Charlie Rose Show” that was shown in October 2007. Reviewing the tape, it didn’t concern Davis that Palin seemed out of her depth on health-care issues or that, when asked to name her favorite candidate among the Republican field, she said, “I’m undecided.” What he liked was how she stuck to her pet issues — energy independence and ethics reform — and thereby refused to let Rose manage the interview. This was the case throughout all of the Palin footage. Consistency. Confidence. And . . . well, look at her.
...Schmidt, to whom Davis quietly supplied the Palin footage, agreed. Neither man apparently saw her lack of familiarity with major national or international issues as a serious liability..

The two were worried that McCain, who liked to surround himself with familiar faces, hardly knew Palin. But he went along with the plan and picked up the phone. The rest, as they say, is history. Also geography. And R.E. Even sex education. But above all comedy.

Especially amusing, in retrospect, is the enthusiasm with which the team congratulated themselves on their genius:

The spunky hockey mom that America beheld the next morning instantly hijacked Obama’s narrative of newness. (“Change is coming!” McCain hollered, almost seeming startled himself.) And five days later, in the hours after Palin’s stunningly self-assured acceptance speech at the G.O.P. convention, I watched as the Republicans in the bar of the Minneapolis Hilton rejoiced as Republicans had not rejoiced since Inauguration Night three and a half long years ago. Jubilant choruses of “She knocked it out of the park” and “One of the greatest speeches ever” were heard throughout the room, and some people gave, yes, Obama-style fist bumps. When the tall, unassuming figure of Palin’s speechwriter, Matthew Scully, shuffled into the bar, he was treated to the first standing ovation of his life. Nicolle Wallace confessed to another staff member that she had cried throughout Palin’s speech. Allowing his feelings to burst out of his composed eggshell of a face, Schmidt bellowed to someone, “Game on!”

Since then it hasn't been going quite so well. But it has taken a while for the McCain team's self-belief to sag. After the final presidential debate, Draper reports, "Schmidt wore a pinstripe suit and his blue eyes carried a victor’s gleam. Like every other McCain aide I encountered that night, he was convinced not only that the senator had turned in his best performance but that viewers would see him as the clear winner." Shades of Kennedy-Nixon 1960, perhaps. Or maybe by this stage the pressure had made Schmidt crack up completely.

Anonymous said…
Time magazine,now they are impartial are they not?

It seems strange that congress/senate has less of a poll rating that GWB does, so the main parties puts up 2 senators?

in the west due to Greek philosophy we have a guru culture,"get in the brightest and best and all will be well" so seemingly inferior minds are dismissed, which is a mistake as luck and circumstance shape lives and history more than we care to admit.

Anonymous said…
Gore Vidal always implied (maybe said directly) that winning American presidential candidates never arose by accident, but whoever wins this election, well I doubt if it's all been planned!
23 October 2008 at 22:37

Anonymous said…
Yep, I read this earlier today. (Are you stalking my brain??!) Ridiculous. I thought the Clintons could be absurd, but the GOP take the cake. 150,000 bucks for designer clothes to make SP into anti-abortion Barbie is really going to play well with people caught in the credit crunch. Mind you, according to other reports, SP already has a great career as a chat show host ahead of her. She will spend the rest of her life reading autocues, empathising with anybody who comes her way, and wearing nice suits. An American success story indeed.
24 October 2008 at 17:28

Anonymous said…
.... and it just gets better! McCain/Palin cynically whip up feelings against people who aren't 'real Americans'. Everybody knows what shade of people they mean. A McCain campaign worker claims a big black man beat her up, robbed her and carved B for Barack on her face. But, hey, isn't it funny the B is backwards - like it was done in a mirror? And there were no witnesses at a busy city bank in daylight? Oh dear.
24 October 2008 at 19:12

Anonymous said…
Well tell me how clever it is to claim that 95% of Americans will receive a tax break, when 40% of Americans don't pay tax?

Anonymous said…
Vald, by the way, I am an Atheist and I am pro-abortion (within reason)
but I have to tell you, anyone who supports late term (near 6 months) abortions needs to get a life.

Anonymous said…
In the name of balance, Bam does have one good thing going for him, he supports the death penalty.
25 October 2008 at 21:16