Invasion of the body scanners

I'm not the biggest fan of the European parliament, which often resembles little more than outdoor relief for second-rate politicians and embodies in its procedures an unremitting federalism. Sometimes, though, it has its uses. On Friday it rejected - by a huge margin of 361 to 16 - a Commission proposal to introduce a new and intrusive generation of body scanners at airports throughout the EU. Or at least to shelve any such proposals until far more research - both into the safety and social acceptability of the devices - had been carried out. The size of the majority, and the tone of the debate, suggests that many MEPs were against the things on principle. 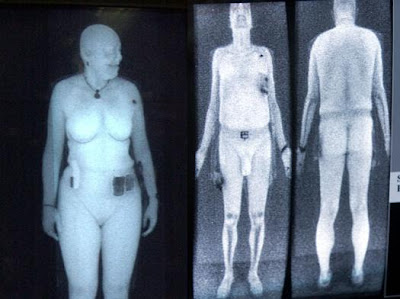 And one can see why. The scanners subject anyone walking through them to a virtual strip search. A clear computer-generated image is produced of their naked body, complete with breasts and/or dangly bits: this is scrutinised by an operative for signs of concealed weapons or cellulite. The operative, we are assured, does so in a professional manner and the image is not stored. At least, not at the moment; though I can imagine the day will come when they find their way onto a database for some yet-to-be-determined reason of "security". And while the current discussion concerns airports, if "successful" the scanners would almost certainly be extended to railway stations, public buildings such as courts or Parliament (though MPs themselves probably wouldn't have to go through them), and perhaps schools - worries about knife-crime here trumping the strictly technical point that the images would constitute child pornography. One day, I have no doubt, advances in technology will liberate body-scanners from the boxes in which they currently reside and they will become as prevalent as CCTV is today.

A spokesman for the Commission claimed that the technology would not only enhance safety and security, but would also have the potential to speed up the check-in process. (The latter is possible: but then most of the lengthy check-in procedures are purely theatrical anyway.) MEPs from all countries were however outraged. One British Conservative said that the plans added to "a growing anxiety that the EU is seen as a tool for challenging basic liberties, without the usual scrutiny and accountability provided at the ballot box." But that's only half the story; the Commission put forward its proposals under pressure from the Americans (who have been installing the scanners in airports for some years now) and, as so often, egged on by a British government which increasing acts as though it is answerable to the security services rather than to the electorate.

When the scanners were tried out at Heathrow a few years ago, the Times reported on the explicitness of the images and the concerns of some passengers, one of whom was quoted as saying that he was shocked by what the scan revealed. There was, however, no outcry either in the press or in Parliament. Very different has been the response in Germany. Last week the Interior Minister Wolfgang Schäubl promised that the scanners would "naturally" never be introduced in Germany, no matter what happens in other countries.

"I won't let the German police be thought of as peeping toms - which they are not," explained Schäubl. His remarks follow a comment from an interior ministry spokeswoman, who assured German reporters with "complete clarity that we are not going to cooperate in this mischief". Another prominent politician declared that "an airport is not a nude beach".

Perhaps, in a neat reversal of history, the Germans are now coming to save us from tyranny. It's certainly somewhat ironic that it is German politicians - from the country that gave us not only the Nazis and the Stasi but also the world's largest naturist movement - who should want to spare us our blushes. But there we have it. And maybe it isn't so surprising. The Germans have enough recent experience of totalitarian governments - either directly or through proximity - to value the freedoms that we in Britain seem neglectful of. Though not quite so neglectful as the inhabitants of the so-called Land of the Free, where the American Civil Liberties Union has thus far failed to prevent the machines being introduced nationwide; one senior security executive was even happy to distribute naked pictures of herself to journalists in a bizarre PR drive. But then it was Bush's America that brought us Guantanamo Bay and the Patriot Act, so I'm not altogether surprised.

As to the scanners themselves, apart from the intrusiveness of the images there are potential health concerns. The manufacturers assure us (or, rather, assure the authorities that are set over us) that bombarding people with microwaves for the purposes of this screening is safe. But without years of study into the long-term effects there is no way of knowing. Certainly, a government comfortable with allowing the devices to be used on children, on pregnant women, on the elderly, on frequent fliers without knowing what long-term health problems they might cause is more than a little careless with its citizens' wellbeing. But then we knew that already.

But let's imagine that they are completely safe. Is that OK then? Of course not. The main objection, that of privacy and decency, remains. Entirely innocent people going about their business will be given an undignified choice between an intimate body search and having their privates exposed to the scrutiny of a seen-it-all-before security guard. Either everyone will be subjected to the process or it will be done on a random basis - anything else (singling out young men who look vaguely Muslim) would be condemned as discriminatory. The inevitable result of that would be that the actual terrorist is waved through while someone's granny is made to stand in the virtual buff. A small price to pay for increased security? No. An unacceptable price; and a society that doesn't see why that is so has lost a vital element of what it means to be civilised.

For, however scary they are in themselves, these machines reveal more than the presence of concealed weapons. They reveal the total disregard for the dignity of the individual on the part of the security apparatus. It simply doesn't register for them that ordinary men and women will be subjected to indignity, or even that this might be considered a problem. That is because, whatever language they employ about protecting life, enthusiasts for this sort of technology have very little interest in such old-fashioned concepts of individuality, privacy, dignity or humanity. They are technocrats, and their only concerns are process, efficiency, gadgetry, solutions. The people passing through the scanners might as well be cattle or hand-luggage; it's not that the devisers of these security measures don't care about people's feelings, it is that those feelings are irrelevant.

But will those feelings even be particularly widespread? I begin to doubt it. The past few years have seen a progressive erosion, not merely of privacy itself but of the very idea of privacy - not to mention equally bourgeois concepts such as modesty and shame. Increasing numbers of people are happy to share the most intimate details of their lives with total strangers; for many, indeed, self-exposure has become a form of validation. The government demands ever greater surveillance of and information about ordinary citizens, in the name of efficiency as well as security, and their demands generally meet with, at most, a resigned shrug. The ancient distinction between private and public is further broken down by phenomena as diverse as reality TV, primary school sex education and the data accumulations of supermarket loyalty cards. Metaphorically, we are increasingly naked and transparent. So when a device comes along which translates that metaphor into actuality there are many who have lost the mental tools to object. If you've nothing to hide, after all, you have nothing to fear. And who but a criminal or a terrorist could possibly have anything to hide?
Email Post
Labels: civil liberties databases Europe Politics security surveillance

Anonymous said…
Truly excellent post, which I nominated for this week's Britblog Roundup (along with two others). Sadly, the deadline for submissions had already expired. I just wanted to say that this post would definitely have merited inclusion.
27 October 2008 at 07:44