A couple of days ago Freethinker was having fun at the expense of fashion-conscious Turkish creationist Adnan Oktar, a man who succeeded last month in having the Richard Dawkins website blocked in his country (on the grounds that it was defamatory of Dawkins to draw attention to the "breath-taking inanity" of one of his books). Oktar is apparently offering a Dr Evil-strength prize of eight trillion dollars to anyone who can show him a fossil of an "intermediate" stage between one species and another. "Evolutionists are at a dead-end in the face of the fossil record," the Independent reported him as saying. "Not one [fossil] belongs to strange-looking creatures in the course of development of the kind supposed by evolutionists."

Here's one of a dinosaur in the process of evolving into a bird. Can I have my money? 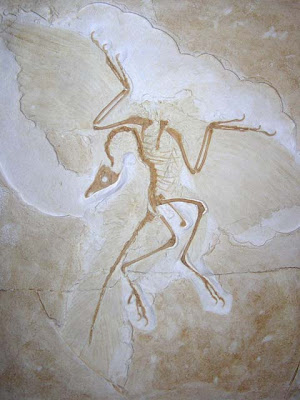 Oktar, who writes (or claims to) under the name Harun Yahya, gave an interview to Der Spiegel recently in which he claimed that "all terrorists are Darwinists":

It is just people who pretend to be Muslims, those who depict themselves as Muslims, who perpetrate bombings, or Darwinists who make it clear that they are terrorists or communists who commit terrorism. Consequently, they are all Darwinists.

Even Osama bin Laden? Yes indeed, says Oktar: he and his followers were people who were "educated abroad, who received a Darwinist education and who internalized Darwinism, but who later called themselves Muslims." 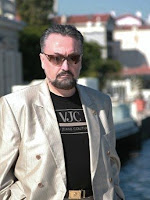 Oktar would seem to be a full-blown conspiracy theorist; previously, he has blamed the Holocaust on a combination of "radical Zionists" and Darwinians. In truth, it's impossible to be a thoroughgoing creationist and not be a conspiracy theorist of sorts. The widespread acceptance of so obviously bogus a theory as Darwinian evolution can only be explained as a plot, Satanic or otherwise. But Oktar is nevertheless confident that next year's Darwin anniversary will turn out to be a flop. "People will be stunned at how they believed in Darwinism," he predicts.

Oktar also predicts that humanity will enter "a golden age" in about 20 years' time, when Jesus and the Muslim messiah-figure, the Mahdi, will return to earth to sort things out. Sweet. In the meantime, though, he woud seem to have some sorting out of his own to do. For much of the past decade, Oktar has been under investigation for everything from the financing of his organisation (which, among other things, distributes free copies of his 800-page Atlas of Creation in Turkey and the US) to allegations of rape and sexual blackmail. The indictments asserted that he and his associates seduced underage girls from wealthy backgrounds, filmed the encounters and then threatened to release the sex-tapes online unless the families paid up. These charges were eventually dropped, but in May, Oktar was sentenced to three years' imprisonment for making threats and running a criminal racket, though he remains free on bail. "Yes, I was accused of being a gang leader," he admits. "However, there is no legal evidence in the sense that I understand to be acceptable."

Just as there's no evidence for evolution in the sense that he understands to be acceptable, presumably.
Email Post
Labels: conspiracy theory Creationism religion

Anonymous said…
Another good post - but who is the heretic here? Oktar is just an extreme example of standard Muslim thinking - if polls are to be believed, evolution (aka real science) is having a tough time in the Caliphate. Or are you the heretic for pointing out that a Muslim is talking rubbish? Teasing us simple folk, I dunno.
1 October 2008 at 17:53

Heresiarch said…
Actually, Oktar is so idiosyncratic it's hard to see him as an example of anything, extreme or otherwise. The big question is where he's getting all his money from. Illegal activities might account for some of it, but I wouldn't be surprised to discover that he's actually being funded by someone or other, or even a government. Perhaps that makes me a conspiracy theorist.
1 October 2008 at 17:59

WeepingCross said…
Well, the gentleman in your photograph is very clearly the Master, so that could explain a great deal.
1 October 2008 at 22:13