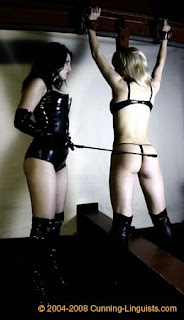 Her sordid secret was revealed after a client told how she spanked and whipped him during wild sessions at her flat.

He described how she dressed in bondage gear to humiliate him for his perverted pleasure. During one meeting she offered to smear peanut butter on her body so he could lick it off. She also bent him over her knee and thrashed him – branding him “pathetic” and mocking the size of his manhood. Details of other services she provided are too depraved to publish in a family newspaper.

Illustrating the story with a selection of photos (not this one) taken from the Satanic Sluts site, the Mirror quotes extensively from the man in his 30s who wishes to remain anonymous "for obvious reasons". He thinks it "unbelievable" that she should complain about the antics of Ross and Brand while she "earns money by dressing as Mistress Voluptua and humiliating me as her sex slave". A non sequitur if ever there was one: though the Mirror is surely heaping more humiliation on poor old Andrew Sachs by reporting these salacious details - and hinting at worse.

Oddly, the report includes a quote from Max Clifford, who says, "It sounds as though she’s been a very naughty girl." Not the sort of thing he would be saying if he didn't want the story to come out.

The Mail, meanwhile, has details of another Myspace page, in the name of "Mistress Voluptua", which gives further details of her services. "Greetings unworthy creature, welcome to my dominion," it begins: the worst sort of clichéd dominatrix-speak, if you ask me. "Worship me in a fully equipped dungeon". Always fully-equipped, these dungeons. How much equipment do you need to be fully equipped? Can anyone enlighten me?

The Heresiarch wondered if the page might be a hoax - Myspace isn't the way most professional dominatrices tout for business. But no, the last login was recorded back in August, well before the Ross/Brand broadcast. Is she still in the dungeon business? And was it any more than a brief, possibly abortive, foray? Intriguingly, the Mail also describes the bondage pictures shown in its report, taken from a photo-shoot in 2006, as "newly released". They have been accessible on the web ever since the story broke, so in what way were they released? Did the Mail hacks stumble upon them, or was their attention drawn to them by Mr Clifford?

When she took the Sun's money for her kiss-and-tell, Georgina Baillie must have known that these skeletons (or perhaps we should say zombies) would come rattling out of her cupboard, dragging chains of which Jacob Marley might have been envious. And although changes have been made to her "official" MySpace page - and still more to the Bebo site that appears under her own name - these attempts have been distinctly half-hearted. What's she up to? Did her genuine desire to speak up for her grandfather overcome her common sense? Or does she fancy herself as a British answer to Sasha Grey?

Whatever is actually going on here, there's certainly a huge contrast between Miss Baillie's erratic behaviour and the dignity and discretion shown by the four women who testified on behalf of Max Mosley a few months ago.

septicisle said…
Daily Sport also splashed the lesbian video on their front page, unsurprisingly. I haven't seen anywhere where you can obtain it for free yet, although a pay site is offering it via here
31 October 2008 at 18:31

Anonymous said…
The stuff about S&M I agree with and I did wonder about the myspace page being a hoax until I noticed that Mistress Voluptua hadn't logged into the site since the 14th October which is before the story broke in the press. Why would she create the site even before the the phone calls were made? If it is the case that she knew something was about to happen she would have had to be in on the calls Brand and Ross made.
31 October 2008 at 18:53

Anonymous said…
When the Sun got the exclusive you can bet the Mirror is going to counter.

Whatever she does or not do, her grandfather does not deserve to be made into "stupid old man who does not know what his grandaughter is up to" storyline, for the press or a edgy comedy show.

It is now explicit in law for better or worse people do have the right to a private life.

A few years ago my late father had a newsagents and a gran bought her under 5 toddler as kinder surprise egg, and it killed her as she choked on the toy. The Press got wind and first it was the evil shopkeeper fault, and when the facts did not fit, they offered my dad 20k for its the evil sweetmaker fault, as long as they can write the story. he turned it down, most would not.

Anonymous said…
Poor Andrew Sachs, he excepted the apologies and I am pretty sure that he wanted the story to go away.
31 October 2008 at 20:33

Anonymous said…
There's at least one more revelation that I know of that I haven't seen posted yet, time will tell if it comes out.

Anonymous said…
And what is that satinplay, maybe it is Brand's grand pan to take over the world.

Just tell us...we are all waiting as are the press.

Anonymous said…
Erm, you didn't actually orchestrate this whole thing yourself, did you H? Only it seems to a 'perfect storm' from your viewpoint. You get the S&M stuff, tabloid hypocrisy, a pop at pop culture, and a seismic shift towards abolishing the license fee and slimming down the Beeb.

Anonymous said…
Get rid of the telly tax? Now that would be a step in the right direction.

Anonymous said…
State controlled media, or publicly-funded media? Not quite the same thing IMHO. But the license fee is indefensible, now.
1 November 2008 at 14:00

eeore said…
What she does or does not do for a living is not the issue.