To praise Ian, but to bury him 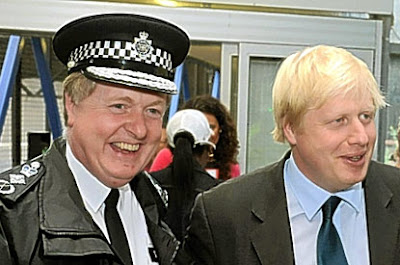 There was a fascinating tidbit in today's Independent on Sunday. It has been carefully leaked that Gordon Brown has "personally intervened" to prevent outgoing Met commissioner Sir Ian Blair from receiving a peerage. A peerage that - seeing as it was granted to his immediate predecessors, and he himself has been such a loyal instrument of government policy - Blair might well have been taking for granted. However, "sources said... that allowing Sir Ian a seat in the House of Lords would fuel controversy over his resignation, and the Prime Minister would prefer to distance the Government from the row surrounding it."

Startling in itself, the information is even more notable for having come out now. Over the past few days, the government (in the shape of home secretary Jacqui Smith) has been assiduously plugging the line that Blair was the casualty of a "Tory plot", that he was done down by a hostile media (especially the Daily Mail), and that Boris Johnson's action in forcing him out amounted to a new and disturbing politicisation of the police. Smith herself told Blair in a pointed open letter that "it is the job of responsible politicians to support those who have to carry heavy operational burdens. It has been my honour to do so." In her attempt to occupy the moral high ground, moreover, Smith has not lacked support from Labour's traditional media allies.

Here, for example, was Blair's old comrade, Ken Livingston, writing in the Guardian:

From the first day of Blair's commissionership there has been a campaign by the most rightwing parts of British society, led among others by the Daily Mail, to have him ousted. Sir Ian's opponents include people who want to turn the clock back to the days before the scandal of the Met's failure to properly investigate the murder of black teenager Stephen Lawrence by racists was exposed in the Macpherson inquiry.

(Conveniently forgetting that it was the Mail that led the campaign to have Stephen Lawrence's killers brought to justice. Odd, too, that Livingstone praises Blair's responsiveness to the Lawrence enquiry while ignoring his complete lack of responsiveness to the conviction of the Met over the shooting of Jean Charles de Menezes. But there's a difference, of course. However egregious were the Met's failures over the inquiry into Stephen's murder, he was not actually killed by the police.)

Livingstone went on to warn (or was it a threat?) that

if we do not want to return to the riots of the 1980s in London or, much more recently, the conflicts in Paris, the new commissioner must be in the same mould as Sir Ian. In making it impossible for one of the most successful crime-reducing commissioners in the Met's history to remain in post, Boris Johnson has acted openly against the interests of Londoners. It is one of many signs that his mayoralty will be a disaster for London.

The Guardian's editorial page, meanwhile, complained of "a very unBritish coup". Parroting the line from the Home office, it began by stating that "the apolitical nature of British policing is not only a tradition, but a great strength. The manner of Sir Ian Blair's departure yesterday raises serious questions about whether it is under threat."

The piece admitted that the manner of Blair's conduct in office raised serious questions about the non-political nature of the police, but then went on to say that "using political office to affect top appointments in the force is no way to reintroduce the desirable distance between policing and politics."

And in a blatantly partisan piece of "analysis" entitled "Tory Plot that forced out Sir Ian Blair", Sandra Laville and Richard Norton-Taylor wrote that

Johnson's attempt to put himself above the law and appoint the next commissioner was immediately challenged by the home secretary, Jacqui Smith, who has been left privately seething by the mayor's flexing of muscles.

They also quoted a "Whitehall source" as stating that it was "a very black day for the constitutional position around policing".

If the response from the Home Office and the government's supporters in the press smacks of prior co-ordination, this should perhaps come as no surprise. Back in July, I reported on the efforts that Boris Johnson was already making to get Ian Blair dismissed, and the commissioner's desperate rear-guard action to keep his job. And what was Blair's line of defence? That "there is concern about the politicisation of the office of commissioner."

The politicisation of the police, however unwelcome, is part and parcel of this government's politicisation of everything. New Labour have politicised schools, they have politicised hospitals, they have even politicised rubbish collection. The police, however (whose very name derives from the same Greek root) have been especially vulnerable to being remoulded as an instrument of state power and Labour party policy. As Henry Porter acutely points out in the Observer, Blair's fall is

...hardly surprising when so many public servants have been bent to Labour's cause during the last 11 years. Many roles that used to call for neutrality have been politicised. The office of Britain's most senior policeman succumbed to the trend partly because of Sir Ian's showboating style and partly because of the new dynamics caused by Labour's creation of the mayor of London.

The result is that the Commissioner of the Metropolitan Police, a role with national and local responsibilities, has suddenly become prey to the specific requirements of the capital's political establishment.

Of course, for the likes of Jacqui Smith, "political" is a cypher for "Tory". But when a senior policeman takes it upon himself to trot down to the House of Commons to make the case for 42 days detention without charge - or, previously, 90 days detention - or speaks out in a press conference about the desirability of the government's plans for ID cards (not any old ID cards, mind, but the particular intrusive, expensive, over-bureaucratic scheme proposed by the government) then he is being political. When he puts the government's bureaucratic agenda ahead of the wishes both of Londoners and of his own officers, then he is being political.

Nor have Labour ministers shown themselves overly diffident in the past when it comes to firing police chiefs. Smith's far more effective predecessor David Blunkett effected the removal of Sussex Chief Constable Paul Whitehouse in June 2001, over the police shooting in his own bedroom of the unarmed James Ashley. He then, in 2002, passed a Police Reform Act which for the first time gave the home secretary the right to intervene in any force he considered to be failing. In 2004, he managed - after a prolonged public row - to secure the early retirement of Humberside Chief Constable David Westwood, after that force was criticised in the case of Soham murderer Ian Huntley.

So the fastidious nose-holding over Boris's "political" intervention is unconvincing. Arguably, indeed, Boris Johnson's action wasn't so much "political" as democratic. He was elected on a platform that all but promised that he would get rid of Blair. If only all politicians were so assiduous in fulfilling their pledges.

In any case, Johnson could not have pulled off this "coup" alone. If Blair had been popular with his senior colleagues, trusted by rank-and-file officers, and had the confidence of the people of London, then the manner of his resignation would indeed have caused a political scandal. But the reverse is actually the case. Given the basic untenability of his position - even pending the result of the De Menezes inquest, the Ghaffur tribunal and the inquiry into Blair's cronyism in the manner of his skiing companion - for Johnson to have provided unambiguous support and cover would itself have constituted an unwarranted political interference in the police. By giving Blair the "bad news", Boris was merely discharging the function of his office as an elected leader.

Those who cry "boo" at this aren't objecting to polical interference so much as to democracy itself: they display the same ruling class disdain for the mob visible, on the other side of the Atlantic, in the vilification of Sarah Palin. And how out of touch they now seem, given how delighted the mass of the police and the public are to see the back of the unloved Ian Blair.

Which makes the revelation in the Independent on Sunday all the more fascinating. Perhaps it is a sign of the government spin-machine rediscovering its equilibrium. One may even speculate whether the returning Peter Mandelson had a hand in it. Certainly the timing is, at the very least, ironic. Like Mandelson in 2001, Ian Blair has become a liability, and they no longer want anything to do with him. Good and faithful servant of the government Sir Ian Blair may have been, but New Labour has never been notable for its gratitude.

Anonymous said…
Well done Heresiarch it was a good read. Maybe I was naive, but I was surprised when a number of media outlets decided to spin the story towards police neutrality and Boris. Especially when Sir Ian Blair was one of the most politicised of police chiefs.

On a breif aside (sorry),if Boris feels put down. At least he is not Chris Huhne who has perhaps suffered one of the most misleading of headlines.

Anonymous said…
Yes indeed. To argue that people should only be arrested on British soil for crimes that actually exist in Britain equates to supporting "holocaust denial", such is the low level of importance now given to notions such as the rule of law. Huhne is completely right, of course.
6 October 2008 at 12:15

Anonymous said…
Ian Blair when younger reportedly wanted to be an actor. Although he bacame Britain's top copper he got his wish.
Boris looks lika a foolish actor but is very astute and decisive.
Jaqui Smith who's she?