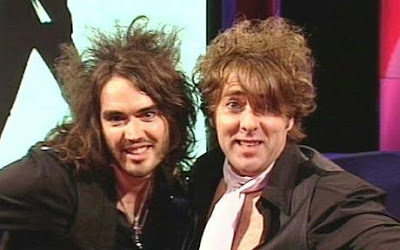 The Russell Brand/ Jonathan Ross saga can best perhaps be told in numbers. Thirty thousand (complaints). Eighteen million (the value of Ross's three year contract with the BBC). Eight (the number of days between the broadcast and when the story went huge. Forty-eight (Jonathan Ross's age). Three (the number of times that Miss Georgina "Voluptua" Baillie will admit to having had carnal relations with Brand). But the number that most troubles me is two - the number of complaints that were made by actual listeners to the programme immediately after it went out.

Amid the acres of written and spoken commentary many have mentioned this fact, so out of keeping with the enormous consequences that the affair has had for the BBC, for its employees (Lesley Douglas, the entirely innocent controller of Radio 2 is the latest casualty as the Beeb decides to let Ross off with a suspension) and for what still count as the boundaries of taste and decency. But usually it is adduced as evidence that the fuss has been, if not about nothing, certainly about nothing serious, nothing remotely justifying the massive coverage. And the negligible number of complaints from listeners is mentioned, too, in speculation about a "generation gap": that the behaviour of Ross and Brand, obnoxious as it appears to most people over the age of - what? 25? 30? 35? 50? - is just edgy humour so far as the Yoof is concerned.

Age plays a part, clearly. Ross's age, for a start - the man's nearly fifty, for heaven's sake - but, most particularly, Andrew Sachs'. If Ross and Brand had rung up, say, David Baddiel or Frank Skinner and deposited lewd insinuations on the answer machine it's hard to see that there would have been any controversy at all. That their victim was someone fondly remembered for a role he played more than thirty years ago - movingly described by his granddaughter as a "lovely, kind old man who's never hurt anyone" - provided the trigger. Which suggests that, at least in the minds of those complaining (who presumably are not in the main regular listeners to the show) some respect is still due to age. Whether or not this is, in itself, justified, is a moot point. Mary Beard has some interesting things to say on that subject:

Is Andrew Sachs a 'lovely old man'? I have no idea. But I do know that when I’m 78 the last thing I will want is my 20 something grand-daughter, with Gothic tendencies and some kind of acquaintance with an over-paid radio star, telling the world that I am “a lovely old man (woman, in my case) who has never harmed anyone in his life”.

If you ask me, that kind of infantilisation of the elderly, as if they were all somehow nice, gentle and wouldn’t hurt a fly, is even worse than the silly, misplaced jokes of Messrs Ross and Brand. Lets hope that Sachs, like the rest of us, has had some opportunity to harm someone in his life and is well prepared to win against these boys – with a life-time’s experience of personal conflict.

It's a complaint often made by Tony Benn, who maintains that when anyone reaches a relatively advanced age they are assumed to be "harmless" and thus are rendered irrelevant through metaphorical cuddles. Few oldies, however distinguished, seem to be immune to the process, though I would except Mary Warnock - who still annoys the hell out of Daily Mail readers well into her eighties - and Margaret Thatcher, who though now in a world of her own,will never be forgiven for having once been the Iron Lady.

Be that as it may, Sachs' years didn't incline more than two listeners to complain about what was a seriously nasty stunt; I suppose many more will have shared the view of Ross and Brand that it was funny. Actually it was funny, in a way. Brand's mock-apology, sung to an improvised accompaniment by Ross, was in its way both creative and amusing - at least until you remember the real pain it caused to a real person. As Brand said to Ross - and listening to the exchanges it's quite obvious that the two were well aware that what they had done was, by normal standards, quite unacceptable - "You don't realise that what you're doing here has a reality outside". Clever man, Russell Brand. But also an idiot.

Brand gives every impression of being a good-natured sociopath - not bad so much as morally incontinent. Getting her well-deserved revenge in the Sun today Georgina claimed that Brand, on learning that she was "Manuel"'s granddaughter, went around bragging about his conquest. We can discount, I think, the claims that "the bouffant-haired comic pranced around the bedroom yelling “I know nothing,” “Qué?” and “I learn it from a booook.”" That sounds more like Max Clifford than Russell Brand to me. But the picture she paints of a man unable to keep his mouth shut even when he wants to is plausible enough.

Georgina said she was “horrified” by Brand’s crass insensitivity. She added: “The thing that really upset me was that Russell kept on repeating his ‘joke’ even when I had asked him to stop. “He first repeated it with David Baddiel on his show and then with Chris Moyles, all within a matter of days. It seemed he was enjoying the whole thing which makes it more despicable. I sent a text saying, ‘Please, please stop’ but he sent one back saying, ‘I’ve apologised for it publicly now and if anything else concerns you give me a call’.”

This type of behaviour is both childish and narcissistic. But it is also characteristic of a certain sort of diva. Some who appears solipsistically to disregard the existence of other people because, in a certain sense, they don't. Or at least they don't matter.

Ross exhibits a rather different sort of pathology. In his combination of narcissism and condesension (notoriously, he boasted that he earned as much as a thousand ordinary journalists) he exhibits what might be described as elite hooliganism. By behaving obnoxiously, in a manner that would have a lesser mortal out on his ear, he demonstrates his social superiority, his wealth and power. Put bluntly, he doesn't give a shit, because he doesn't need to. It's a form of status affirmation (i.e. boasting) that produces in the less privileged sentiments of disapproval, but also jealousy, admiration and wish fulfilment. Hence the lack of initial complaints.

Elite hooliganism is most associated, in our age, with celebrities, rock stars, footballers and members of the Bullingdon Club. A well known diva - it might have been Ethyl Merman - once said that "you can be as difficult as you can deliver". But it's a behaviour pattern of immemorial antiquity, found in almost every culture. Nero used to go about the streets of Rome at night, beating up respectable citizens - because there was no-one to stop him. One night in 415BC, just before the departure of a disastrous naval expedition to Sicily, a gang of young bucks supposedly led by Alcibiades - the Tony Blair of his day - desecrated the sacred Herms, causing one of the worst scandals in Athenian history. And I particularly cherish this passage, from John Brewer's study on 18th century taste, The Pleasures of the Imagination:

One evening in 1663, three years after the Restoration, three courtiers - Sir Charles Sedley, Lord Buckhurst, and Sir Thomas Ogle - left the palace of Whitehall and walked north to the fleshpots and taverns of Covent Garden. Sedley's literary reputation at the court of Charles II was second to none. Playwright, poet and translator, he was told by his monarch that "Nature had given him a patent to be Apollo's viceroy" and that "his style, either in writing or discourse, would be the standard of the English tongue". Buckhurst was the great Maecenas of the court, the patron of Dryden, Butler and Wycherley, and the author of one of the Restoration's most famous songs, "To all you ladies". Both appeared, as Lisideius and Eugenius, in Dryden's Essay on Dramatick Poesie (1668) which was dedicated to Buckhurst.

The impression they made that evening was rather different. From the balcony of Oxford Kate's Tavern they shocked and delighted a crowd of onlookers with their blasphemous and obscene antics. According to Samuel Pepys, Sedley "showed his nakedness, acting all the postures of lust and buggery that could be imagined, and abusing of Scripture... preaching a mocking sermon from that pulpit... that being done, he took a glass of wine and washed his prick in it and then drank it off; and then took another and drank the king's health." Finally, according to the waspish gossip, Anthony a Wood, all three men turned their backs on the citizenry, and "Putting down their breeches they excrementiz'd in the street".

It would never have happened under Cromwell, would it? The past decade has been one one of Restoration-style decadence and excesss, in which elite hooligans were indulged. The next few years are unlikely to give Ross and his kind such leeway.
Email Post
Labels: anthropology BBC culture Manuelgate Society

Olive said…
"the bouffant-haired comic pranced around the bedroom yelling “I know nothing,” “Qué?” and “I learn it from a booook.”" That sounds more like Max Clifford than Russell Brand to me.

I have no difficulty in imagining the desperately unfunny man-child Brand doing this.
31 October 2008 at 00:30

Heresiarch said…
It reminded me rather too closely of the story that David Mellor had insisted on wearing a Chelsea shirt.
31 October 2008 at 07:33

Olive said…
Oddly enough, the David Mellor story sprang into my mind when you mentioned Max Clifford. On a wholly unrelated note, what do you think of Peter Mandelson casting covetous glances at Nominet? (http://www.theregister.co.uk/2008/10/29/berr_nominet/).
31 October 2008 at 11:56

Anonymous said…
I must be getting old as I cannot understand either of them when they speak, the 10K plus who complained must all be from Essex.

Listening to Campbell on R5live this morning goading Osborne on Corfugate (when he was supposed to interviewing him on government borrowing) you kind of know its all out war between the Tories and the blessed beed.

Anonymous said…
I was stunned by the revelation - repeated more than once by the BBC - that Jonathan Ross is 'a comedian'. Er, yeah, I must have missed all those stand up shows and sitcoms he did, presumably during a long weekend around March, 1987.

I note that Brandy Boy - a real comedian, just not a very good one - is now off to conquer America, the way Robbie Williams and Steve Coogan did. We can expect revelations from RB about how shallow, greedy and two-faced people are in LA, New York, or maybe Podunk, Illinois. Give it a year or so.
31 October 2008 at 16:32