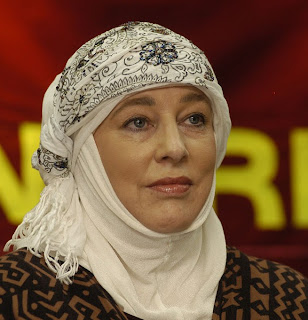 Iain Dale offered an amusing vignette yesterday. He was taking part in a TV show (for Press TV, an Iranian-backed outfit) discussing whether George W. Bush was the worst president in US history. It was presented by Yvonne Ridley, the former Sunday Express journalist who converted to Islam not long after being kidnapped by the Taliban and is now one of the darlings of the international Islamist circuit. Says Dale:

I had never met Ms Ridley before, so being the polite lad I am, extended my hand to shake hands with her. She recoiled. "I don't do that!" she exclaimed. "What do you mean, you don't do that?" I asked, slightly nervously. "Have you never been to an Arab country?" she asked. "Not many," I said. "Well if you had, you'd know that Muslim women don't shake hands with men," she informed me. "Well all the Muslim women I know not only shake my hand but usually kiss me," I retorted. And then I added for good measure: "And anyway, I always go by the maxim, when in England...". So we didn't get off to a very good start.

Dale, it turns out, isn't the first person to come up against Ridley's preciousness in regard to the hand-shaking business. In an Observer interview with her a few months ago, Rachel Cooke revealed that she had lost a job with the Saudi-backed Islam Channel after refusing to shake hands with a Saudi prince. Who ought to know a thing or two about Arab etiquette.

Ridley has had a strange journey from hard-drinking Fleet Street hackette to her latest incarnation as a roving ambassador for radical Islam. In conversation with Cooke she described herself as a "motivational speaker" - "I'm reinforcing their beliefs, I'm attacking the War on Terror, which is a war on Islam, and I'm defending the resistance in the Muslim world." She apparently wowed a crowd in Tanzania by declaring that "Drinking Coca-Cola is like drinking the blood of Palestinian children!" George Galloway, her colleague in the Respect party (or what's left of it) once told her admiringly that "you make me look like a moderate". A line that Ridley is proud to repeat.

The convert's zeal might explain some of Ridley's odder pronouncements - such as her description of veiled women as "as multi-skilled, multi-talented, resilient women whose brand of sisterhood makes Western feminism pale into insignificance." She always denies suggestions of Stockholm syndrome, pointing out how she made such a nuisance of herself as a hostage that the Taliban were delighted to see the back of her. But certain aspects of her stance irresistibly recall the Jungian concept of enantidromia - a going over to the opposite extreme. Thus she has no sympathy for Iranian women who prefer not to wear the hijab - "It is clear that the hijab is an obligation, not a choice ... the Islamic Republic of Iran: there's a bit of a clue in the title" - preferring to stand up for Tunisian women fighting for the right to shroud themselves. She claims that "Just about everything that feminists strived for in the 70s was already available to Muslim women 1400 years ago," while hinting that most women would be better off - and certainly more Islamic - staying at home with the kids.

The Taliban will, if they have followed her career since 2001, certainly be proud, if perhaps slightly bemused, by their creation. In one article, for example, she complained in true Talib style about the popularity in some Muslim countries for boy bands:

Eminent scholars throughout history have often opined that music is haram, and I don't recall reading anything about the Sahaba whooping it up to the sound of music. Don't get me wrong. I'm all for people letting off steam, but in a dignified manner and one which is appropriate to their surroundings.

(There's something strangely New Labour about the phrasing of that last sentence.) In the same piece, Ridley poured scorn on Sami Yusuf, a British-born Muslim singer who "is so proud of his claret-colored passport that he wants us all to wave the Union Jacks." Such patriotism is not a notion that appeals to Ridley:

How can anyone be proud to be British? Britain is the third most hated country in the world. The Union Jack is drenched in the blood of our brothers and sisters across Iraq, Afghanistan, and Palestine. Our history is steeped in the blood of colonialism, rooted in slavery, brutality, torture, and oppression.

This extreme anti-Western rhetoric is presumably what endears her to her audiences. Pretty extraordinary stuff it is, too. She told Cooke that in Guantanamo Bay, "12-, 13-, and 14-year-olds [were] being locked up without charge, being sodomised by American soldiers". Elsewhere, she has described her views as "pretty much in line with Hamas" and Israel as "that disgusting little watchdog of America". In that regard it's worth noting that her current employer Press TV is notorious for Holocaust denial. Last year Ridley's presence at an event in Montreal was widely seen as evidence that Canada's New Democratic Party had been infiltrated by radical Islamists.

It's hard to know quite what to make of her. Rachel Cooke wrote that "she is extremely verbose but, in mood, swings between vagueness and anger, sudden changes in emotional weather that I find very disorienting." Some people speculate that she's simply a drama queen who enjoys all the attention. Or that she's just taking the piss. That last has been suggested by David T of Harry's Place who says that "sometimes, I do wonder if she’s not just going along for the ride: winding up the funny foreigners until they ululate and leap around." A more off-the-wall suggestion is that she's covertly working for MI6.

Two thoughts occur to me. First, Ridley seems to be an unusually literal example of the tendency of radical Muslims and left-wingers to find common cause. There can be nothing more reactionary than a desire to recreate a medieval theocracy based on sexual segregation, widespread capital punishment and rule by men in long beards, yet such movements will find vocal apologists in Islington and Hampstead, or in the pages of the Guardian. Ridley differs from most of her kind only in taking her political stance to its natural conclusion.

She is indeed a strange one - Ken Livingstone, in a moment of exasperation, once spoke of a visit from 'Planet Ridley'.

But as you say, oddly familiar. I once saw a TV item following a female Iranian MP around, and she had quite a resemblance to Ridley - agitated, fingerwagging, eyes everywhere. The MP is a convert from Sunni to Shia, and perhaps there is a common psychological type here.

It's the anger that seems to be dominant, though to be fair a friend who went to here her speak to other Muslim women in Glasgow said she was quite a funny speaker - she also raved at length about the beauty of her Taliban captors.

Like you, I doubt if she's a spook of some kind, but you are right to raise the possibility, even if faint. There are precedents, after all.

Olive said…
She told Cooke that in Guantanamo Bay, "12-, 13-, and 14-year-olds [were] being locked up without charge, being sodomised by American soldiers".

I don't know about the sodomy, but it's a fact that kids of that age were detained in Guantanamo bay:

Anonymous said…
"Our history is steeped in the blood of colonialism, rooted in slavery, brutality, torture, and oppression."

If only she understood the truth of it.

valdemar said…
Didn't Orwell (a lefty) nail this pretty effectively in 'Notes on Nationalism'? He wrote in 1945: 'In continental Europe Fascist movements were largely recruited from among Communists, and the opposite process may well happen within the next few years.'

Oh, and I love this quote from the silly woman:
'Our history is steeped in the blood of colonialism, rooted in slavery, brutality, torture, and oppression.'
Now wouldn't that be a perfectly truthful thing for any Saudi prince to say?
23 October 2008 at 17:09

Heresiarch said…
Indeed. But then all people's histories are steeped in blood and oppression if they've any achievements to their credit. If the Muslim world has been more on the receiving than the giving end over the past couple of centuries it's merely because they were so much less successful than the West.
23 October 2008 at 17:44

Anonymous said…
There is a very small gap between the political/scientific fundamentalism of Marxism, "our truth is more than other supposed truth so we get special rights" ....

...to Islamism "our truth is more than other supposed truth so we get special rights"

And indeed the racial/nationalist fundamentalism of national socialism.

they are all interchangeable and its no surprise they all admire and shrill for each other.

the message is different but the underlying philosophy is the same.

its not a coincidence that Islamism came about at the same time in pre WW2 when the fundamentalism of international and nation socialism were in such conflict and ascendancy , one breeds the other and leads to the other.
23 October 2008 at 19:23

Heresiarch said…
I never said she was, David. I said that left-wingers and Islamic radicals often make common cause. Do you deny it? How can you, when much of your own output is devoted to showcasing the preposterous nature of this alliance.
24 October 2008 at 11:43

"certain aspects of her stance irresistibly recall the Jungian concept of enantidromia - a going over to the opposite extreme."

As a Muslim I have long held a theory (or perhaps more of an observation) that western converts to Islam seem to be disproportionally represented in the terrorism/extremism stakes.*

Stockholm syndrome seems to me a red herring, but this concept of enantidromia seems to slighty better encapsulate what appears to be happening here.

Certainly in my own experience i have met quite a few converts who seem to be more fundamentalist than the average Muslim. It is as if (during the process of converting) their belief system is in the process of being recalibrated and for some reason their default starting position often ends taking on a more hardline Islamist worldview.

Although I hesitate to use the term brainwashing, I think those who influence the converts are in a unique position. They are essentially working with someone is being spiritually re-born. Unlike non-converts, they do not have any of the cultural baggage that is a an anathema to the modern fundamentist Muslim. The convert is therefore easy prey for the hardline Salafis and Islamists who are able to steer the convert to their own 'purer' and more 'authentic' version of Islam.

* Richard Reid, John Walker Lindh, David Hicks, Dhiren Bhanot are a few prominent examples but I am sure that if i did more research i'd be able to find quite a few more.
13 February 2009 at 15:47